By Reno Surya and Aisyah Llewellyn

Surabaya, Indonesia – The families of sailors on board a missing Indonesian submarine say they still believe they will be found safely even as oxygen reserves are expected to run out on Saturday.

The KRI Nanggala-402 carrying 53 people went missing during a live-fire exercise on Wednesday in waters north of the island of Bali in Indonesia. The vessel was equipped with emergency oxygen enough for 72 hours, according to local authorities.

“He said, ‘Pray for me. I’m leaving now, see you soon.’ I found out that the boat disappeared at around 6pm on Wednesday. I was shocked but I tried not to panic in front of my daughter,” said Berda.

“I don’t know how to explain this to my child. She’s still in the first grade of elementary school. She doesn’t understand. She just keeps saying, ‘Mama why are you crying all the time?’ I want him back. I don’t want the last breakfast we had to be our last moment together.”

The KRI Nanggala-402 lost contact with naval authorities at about 3am on Wednesday after requesting permission to dive and fire one of its torpedoes as part of the training exercise. Hundreds of personnel and tonnes of search-and-rescue equipment have been deployed to search for the submarine, which was built in Germany in 1977 and acquired by the Indonesian Navy in 1981.

Indonesian military spokesperson Achmad Riad told a news conference on Friday the vessel has yet to be found despite the massive search effort.

Wuwung said the presence of an oil slick sighted in the waters close to the submarine’s last known location on Wednesday made him fear the vessel may have cracked or broken up because of seawater pressure.

On Thursday, the Indonesian military reported it found an unidentified object at a depth of about 100 metres that had a “magnetic force” similar to that of a submarine. However, it has not been confirmed this was the KRI Nanggala-402.

An Indonesian Navy report also stated a power outage on the submarine may have made it sink to a depth of about 700 metres, which would mean no survivors.

“It is possible that the steering jammed because it was too deep and the water pressure was too strong, which could have damaged the submarine’s propeller,” said Wuwung.

“The KRI Nanggala-402 can withstand a maximum depth of 300 metres. At 500 metres it is still possible for the submarine to be intact but getting enough oxygen to the crew is clearly difficult. If it really has sunk to a depth of 700 metres as has been reported then … I can’t imagine. The only thing we can do is pray. May God bless them all.”

‘My husband is safe’

Winny Widayanti, 45, the wife of Colonel Harry Setiawan, told Al Jazeera her husband, a seaman for two decades, was not supposed to be on the stricken submarine, but he did not want to leave his junior crew to carry out torpedo training exercises without his supervision, and he decided to join at the last minute.

Widayanti last spoke to her husband, who enjoys sports and playing the guitar in his spare time, on Tuesday when he was on board the KRI Nanggala-402, but it had not yet descended to start the drills.

“I believe my husband is safe. I don’t know why but that is what my intuition as a wife tells me,” she said. “Of course I’m worried. But we must be strong and not panic. I believe my husband will survive. He’s very experienced. I don’t know about the condition of the submarine, but we trust the search-and-rescue teams. There is also a lot of help from other countries.”

Singapore, Malaysia, India, the United States, and Australia have sent specialised search-and-rescue equipment to assist in locating the KRI Nanggala-402, including vessels and aircraft.

On Friday, Indonesia’s Defence Minister Prabowo Subianto tweeted his thanks to the Australian and Indian governments for their help with the search, describing the loss of contact with the submarine as a “tragedy”.

As fears grow for the crew of the submarine, Sheva Naufal Zidane, 18, Colonel Setiawan’s son, told Al Jazeera he refuses to give up hope, adding he plans to one day join the Indonesian Navy himself.

“My father is my inspiration. I want to follow in his footsteps and make him proud. When I achieve my goal of joining the navy, I believe my father will be here to see it and accompany me to my graduation,” he said.

“My father is a strong man. He will definitely survive.” 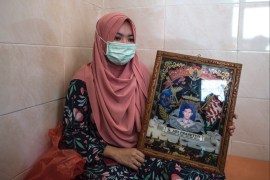 German-built craft is equipped with enough oxygen that would last only until Saturday morning after losing power. 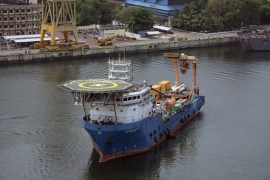 Officials say air supply of the submarine would last only until Saturday as search team spots ‘high magnetic force’. 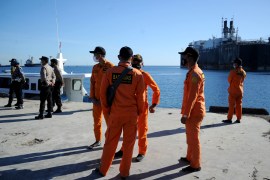 There has been no contact from the KRI Nanggala-402 and the 53 crew on board for more than 24 hours. 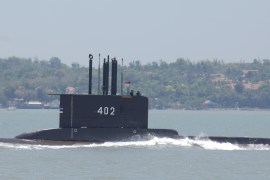 The German-made submarine went missing on Wednesday when it was conducting a torpedo drill in waters north of Bali.