Manila has filed two more diplomatic protests against China over what it calls “blatant disregard” of Beijing’s commitment “to promote peace and stability in the region” following the continued presence of Chinese vessels within the Philippines’ exclusive economic zone (EEZ) in the South China Sea.

In a statement issued on Friday, the Philippines’ Department of Foreign Affairs (DFA) said the country’s maritime law enforcement agencies observed a total of 165 Chinese fishing vessels, maritime militia vessels and coastguard vessels spread throughout Manila’s EEZ as of April 20.

At least five of the vessels, with visible Chinese Coast Guard markers, were sighted “within the vicinities” of the Philippines’ Pag-asa Island (also known as Thitu), as well as the Second Thomas Reef and the Scarborough Shoal, the sea feature whose control was taken by China from the Philippines in 2012.

“The presence of these vessels blatantly infringe upon Philippine sovereignty, sovereign rights and jurisdiction,” it said.

“The continued swarming and threatening presence of the Chinese vessels creates an atmosphere of instability and is a blatant disregard of the commitments by China to promote peace and stability in the region,” the DFA added, saying that the two protests were lodged on Wednesday.

Foreign Affairs Secretary Teodoro Locsin had earlier promised that Manila will file diplomatic protests “every day” as long as the Chinese vessels remain within the Philippine EEZ.

Philippine President Rodrigo Duterte’s spokesman, Harry Roque, had also warned that the presence of the Chinese could ignite “unwanted hostilities” in the region.

However, Duterte, who is known to have cultivated closer ties with Beijing, backtracked on the tough talk and said he does not want tensions to erupt in the area, repeating earlier pronouncements that he wants to reach an agreement with China for possible joint drilling operations.

For weeks, Manila has called on Beijing to withdraw the “maritime militia” vessels, saying their incursion into the Philippines’s EEZ is illegal as defined by the International Court of Arbitration at The Hague.

But China – which claims almost the entirety of the resource-rich sea – has refused, insisting they are fishing boats sheltering from bad weather and are allowed to be there based on its historic rights. China’s claim has been declared as “without merit” by The Hague court.

Through the latest protests, Manila is reminding Beijing that the islands and reefs, where the Chinese vessels were seen “are integral parts of the Philippines over which it has sovereignty and jurisdiction”, the DFA said.

Manila said it also reminded Beijing of its commitment under a 2002 joint declaration with the 10-member Association of Southeast Asian Nations (ASEAN) about how to “maintain an atmosphere conducive” to the long-running talks for a Code of Conduct between ASEAN and China in the disputed waters.

The presence of the Chinese ships has prompted the United States to deploy an aircraft carrier in the South China Sea.

The Philippines also held joint military exercises recently with the US, which has a decades-long mutual defence pact with Manila. 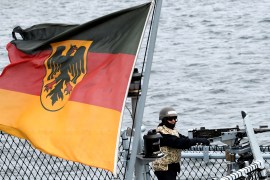 US hails plan by NATO ally calling it welcome support for a ‘rules-based international order’ amid regional tensions. 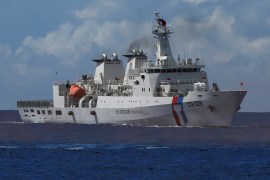 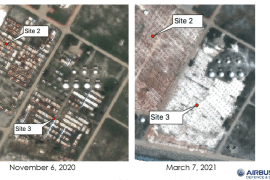