India is reporting record numbers of coronavirus cases and deaths amid an alarming shortage of medical oxygen and beds in its hospitals as a brutal second wave of COVID-19 overwhelms its under-funded, fragile healthcare system.

On Friday, the world’s second-most populous nation reported a single-day high of 332,730 new cases and a record 2,263 deaths.

Hospitals across northern and western India, including the capital New Delhi, say they are fully occupied and running out of oxygen supplies.

India must reduce mobility and mixing: WHO

He called reducing transmission in India a “very difficult task”.

“We’ve got to reduce mixing in whatever way we can to reduce infection. The Indian government is looking to do that.”

India’s Cadila Healthcare has started producing its potential COVID-19 vaccine for which it will seek emergency use authorisation in May or June, its managing director told Reuters, with an aim to make up to 240 million doses a year.

“We have just started producing doses,” Sharvil Patel said in a Microsoft Teams interview. “But it is not meaningfully large.”

Prime Minister Narendra Modi, whose government has been criticised for relaxing virus curbs too quickly, said the government was making a “continuous effort” to increase oxygen supplies, including steps to divert industrial oxygen.

Modi asked states to work together to meet the needs for medicines and oxygen, and stop hoarding and black marketeering.

The death toll in a devastating fire at a hospital in western India rose to 14 as authorities continue to evacuate coronavirus patients away from the facility’s premises.

According to an official from the Vijay Vallabh Hospital, a spark from an air conditioner triggered the fire, which was exacerbated by the heavy oxygen supply running in the facility’s ICU.

The bodies of victims of the fire were being cremated at a nearby crematorium.

India’s Cadila Healthcare Ltd has received restricted emergency use approval from local regulators to use a Hepatitis C drug as a treatment for moderate COVID-19 in adults, the drugmaker said.

The approval follows promising results from a late-stage study of the drug and comes in the middle of a massive wave of COVID-19 cases in India, which has overwhelmed its health system and left many hospitals short of critical oxygen supplies.

Cadila said patients given its therapy in clinical trials had shown a lesser need for supplemental oxygen, which is given to seriously ill COVID-19 patients to increase its supply in the blood and lungs.

China has offered assistance to India amid a worsening COVID-19 situation in the South Asian country.

According to state-run media reports, Beijing said communication is under way with India if they needed support and assistance.

“The Chinese government and people will firmly support India in its fight against the COVID19 pandemic and are willing to provide support and assistance in accordance with the needs of the Indian side,” the Global Times quoted Lijian Zhao, Chinese Foreign Ministry spokesman, as saying.

A Pakistan-based prominent charity has offered to send ambulances and medical staff to help the Indian government as cases of COVID-19 have spiked in the country.

Faisal Edhi, the managing trustee of the Edhi Foundation, confirmed to Al Jazeera that he had written a letter to Indian Prime Minister Narendra Modi.

“We sympathise with you greatly and during this strenuous time, we would like to extend our help in the form of a fleet of 50 ambulances along with our services to assist you in addressing, and further circumventing, the current health conditions,” the letter reads.

India has put oxygen tankers on special express trains as leading hospitals in New Delhi begged on social media for more supplies to save COVID-19 patients who are struggling to breathe.

“We have surplus oxygen at plants which are far off from places where it is needed right now. Trucking oxygen is a challenge from these plants,” said Saket Tiku, president of the All India Industrial Gases Manufacturers Association.

“We have ramped up the production as oxygen consumption is rising through the roof. But we have limitations and the biggest challenge right now is transporting it to where it’s urgently needed.”

‘This is on you’: Opposition leader slams government

“Corona can cause a fall in oxygen level but it’s #OxygenShortage & lack of ICU beds which is causing many deaths. GOI, this is on you,” Gandhi posted on Twitter.

Corona can cause a fall in oxygen level but it’s #OxygenShortage & lack of ICU beds which is causing many deaths.

GOI, this is on you.

Many people are creating Twitter accounts to seek help from those in positions of power, officials manning helpline numbers said but hundreds of millions of mainly poorer Indians do not have access to a smartphone or social media.

Sirens wailing, a police convoy escorting a tanker carrying oxygen reached a hospital in India’s capital just in time, to the huge relief of doctors and relatives of COVID-19 patients counting on the supply to stave off death.

A dire shortage of oxygen – essential for the survival of critical COVID-19 patients – has meant states are closely guarding their supplies and even posting armed police at production plants to ensure security.

India is battling a record-breaking rise in COVID-19 infections.

A key question is whether a new variant with potentially worrying mutations – B.1.617 – is behind what is currently the world’s fastest-growing outbreak, which added more than 330,000 daily fresh infections on Friday.

The B.1.617 variant has already appeared elsewhere, including in the United States, Australia, Israel and Singapore. Concern about it has led some countries, including the United Kingdom and Canada, to slap travel restrictions on India.

French President Emmanuel Macron has expressed his solidarity with India as the South Asian nation struggles to contain a second wave of the coronavirus.

“I want to send a message of solidarity to the Indian people, facing a resurgence of COVID-19 cases. France is with you in this struggle, which spares no one. We stand ready to provide our support,” Macron said.

Johnson & Johnson’s single-shot COVID-19 vaccine is expected to be imported for “fill and finish” by June or July, India’s financial daily the Mint reported.

Fill and finish is the final step in the manufacturing process of putting the vaccine into vials or syringes, sealing them and packaging them up for shipping.

India has said it would fast-track emergency approvals for COVID-19 vaccines authorised by Western countries and Japan, paving the way for possible imports of Pfizer, Johnson & Johnson and Moderna shots.

This will exempt companies from carrying out local safety trials for their vaccines.

Patients die as hospitals run out of oxygen: Reports

Indian media reports said at least 25 patients have died in the last 24 hours at a hospital in New Delhi after they ran out of oxygen supplies.

25 sickest patients have died in last 24 hrs at the hospital. Oxygen will last another 2 hrs. Ventilators & Bipap not working effectively. Need Oxygen to be airlifted urgently. Lives of another 60 sickest patients in peril: Director-Medical, Sir Ganga Ram Hospital, Delhi

Max Healthcare, which runs a network of hospitals in northern and western India, posted an appeal on Twitter for emergency supplies of oxygen at its facility in the capital.

Similar desperate calls from hospitals and common people have been posted on social media for days this week across the country.

India has recorded the world’s highest daily tally of coronavirus cases for the second day in a row, while daily deaths from COVID-19 also jumped by a record.

India recorded 314,835 new infections on Thursday, surpassing a record held by the United States in January when it hit 297,430 new cases. The US tally has since fallen. 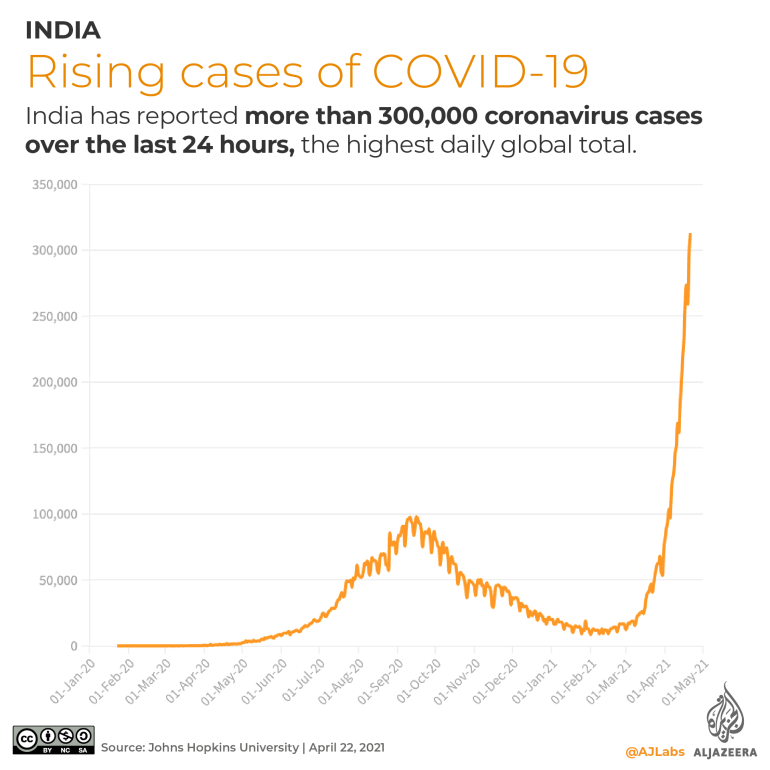 A fire broke out in the intensive care unit (ICU) of a hospital in western India’s Maharashtra state, killing 13 COVID-19 patients, an official said.

The fire on the second floor of the hospital has been extinguished and some patients requiring oxygen have been moved to nearby hospitals, said Dilip Shah, CEO of Vijay Vallabh Hospital in the Virar area, about 70km (43 miles) north of Mumbai.

Shah said there are 90 patients in the hospital and the cause of the fire is being investigated.

“This is happening just two days after another accident at another hospital in the state of Maharashtra,” Al Jazeera’s Elizabeth Puranam, who is in New Delhi, said.

“On Wednesday we had a leak in an oxygen tank that was supplying oxygen to patients on ventilators, fixing that leak disrupted the oxygen supply and led to the deaths of 24 COVID-19 patients.”

Canada has banned all flights from India and Pakistan for 30 days due to the growing wave of COVID-19 cases in that region, Transport Minister Omar Alghabra said.

The ban started late on Thursday, hours after India reported on Thursday a record 314,000 new infections in the previous 24 hours. Cargo flights from India and Pakistan will continue.

More than a million people living in Canada have Indian descent, while there are 100,000 Canadians who have Pakistani ancestry.