More than 100 Palestinians and 20 Israeli police have been wounded in overnight violent clashes that ensued after far-right Israelis marched in the occupied East Jerusalem chanting “death to Arabs”.

The Palestinian Red Crescent said it had treated at least 105 people, with some 20 of them hospitalised. Israeli police said 20 officers were wounded, three of whom were taken to hospital.

The violence broke out outside one of the entrances to the walled Old City where far-right Israelis had completed a march, during which participants harassed Palestinians and chanted “death to Arabs” and waved banners reading: “Death to terrorists”.

As Palestinians heard reports of the Israeli march organised by a far-right group, Lehava, they gathered in thousands near the Damascus Gate with ambulances racing up and down the crowded backstreets with their sirens blaring.

Hundreds of Israeli police in riot gear sealed off the area to prevent the Israeli and Palestinian crowds from potentially meeting, creating a 50-metre (164 feet) no man’s land between themselves and the group of Palestinian youths.

Police on horseback fired skunk water at the Israelis, pushing them away from their position at the Old City’s New Gate – just 600 metres (yards) away from Palestinians gathered at the Damascus Gate – and towards Jerusalem’s central Jaffa Road.

There have been nightly disturbances in the area since the start of Ramadan on April 13 with Palestinians complaining that police were blocking access to the promenade around the walls, a popular gathering place for Palestinians after the end of the daytime Ramadan fast.

“Palestinians love to relax in this area after evening prayers at Al-Aqsa Mosque, but the occupation [Israel] doesn’t like it. It’s a matter of sovereignty,” said Jerusalem resident Mohammad Abu al-Homus, pointing to metal barricades thrown up by police in the area in recent weeks.

But police say the measure is part of its efforts to ensure that tens of thousands of Muslim worshippers have safe access to the main Islamic prayer site in the Old City, known as the Noble Sanctuary.

Tensions have spiked in recent days in Jerusalem, which has long been a flashpoint in the Israeli-Palestinian conflict, and is home to holy sites sacred to Muslims, Christians and Jews.

The Palestinian president’s office condemned “the growing incitement by extremist far-right Israeli settler groups” and urged “the international community to protect the Palestinian people from the ongoing settler attacks”.

“East Jerusalem is the eternal capital of Palestine and is a red line,” the presidency said in a press statement on Thursday.

Hamas, which governs Gaza, also condemned the violence, and called “it an Israeli plot against the Al-Aqsa Mosque – one of Islam’s most revered sites.

In a statement in English, Hebrew and Arabic, the US Embassy said it was “deeply concerned” about the violence.

“We hope all responsible voices will promote an end to incitement, a return to calm, and respect for the safety and dignity of everyone in Jerusalem,” it said.

✌️🇵🇸✌️
The moment when the dozens of worshipers were managed to enter Al-Aqsa Mosque after occupation forces attempts to prevent them throughout Bab Hutta Gate.
It's a proud moment💗,May Allah make us see a real victory#القدس_تنتفض #القدس #فلسطين #رمضان #Jerusalem #Palestine 🇵🇸 pic.twitter.com/04tFxWpjgk

In recent days, Israeli far-right groups have taken to the street bullying Arabs in nightly confrontations.

The show of force came after a video circulated on TikTok purported to show a Palestinian slapping an ultraorthodox Jewish man on Jerusalem’s light rail train. Other videos made in response appeared to show Israelis assaulting Arabs.

Police used metal barricades to halt the far-right protesters a few hundred meters from the Damascus Gate. Later, they used water cannon, stun grenades and mounted police to push them back towards mostly Jewish West Jerusalem.

The Palestinians dragged garbage bins, some of them ablaze, into the roads on their side to disrupt police and block them from their side. Some discharged small fireworks towards police.

The police said in a statement that 50 arrests were made, but did not specify whether those arrested were Palestinians or Israelis and did not refer to any specific instances of violence.

Israel captured East Jerusalem in the 1967 war and annexed it in a move not recognised by most of the international community.

The Palestinians want East Jerusalem to be the capital of their future state. Its fate has been one of the most divisive issues in the peace process, which ground to a halt more than 10 years ago.

Thousands of Palestinians were expected to attend weekly prayers at the Al-Aqsa Mosque compound in Jerusalem’s Old City later on Friday. The site is the third holiest in Islam and the holiest for Jews, who refer to it as the Temple Mount.

The sprawling hilltop holy site has been the scene of clashes on a number of occasions over the years and was the epicentre of the first Intifada, or uprising, in 2000. 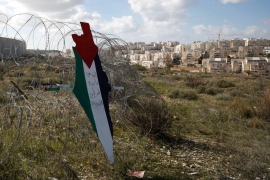 The Jerusalem Declaration on Antisemitism is an orientalist text

The JDA fails to produce true opposition to the core problem of the IHRA definition: the silencing of Palestinians. 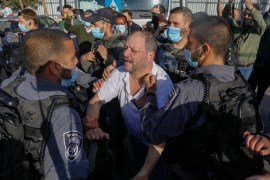 Ofer Cassif was attending a protest against Jewish settlements in the Palestinian neighbourhood of Sheikh Jarrah. 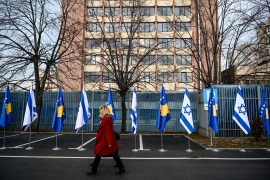 Move comes after Israel recognised Kosovo’s independence and means there are 3 countries with embassies in Jerusalem.