The European Commission has said no decision had yet been taken on whether to launch legal action against AstraZeneca over a shortfall in deliveries of coronavirus vaccine doses.

The EU executive – which negotiated contracts with vaccine producers on behalf of the European Union’s member states – could seek an injunction because the company had not yet made a formal commitment on planned deliveries.

More than three million people worldwide have died from the coronavirus pandemic, while at least 143 million other cases have been reported.

This live blog is now closed. These were Thursday’s updates:

African countries urged to use vaccines quickly after expiry confusion

The African Union’s disease control body has urged countries to use COVID-19 vaccines donated to them quickly to save lives and livelihoods, after confusion in Malawi and South Sudan about whether doses they received had expired.

“My appeal to member states is: if we are doing our part to mobilise these vaccines, you do your part and use the vaccines,” John Nkengasong, director of the Africa Centres for Disease Control and Prevention (Africa CDC), told a news conference.

Malawi plans to destroy more than 16,000 doses of AstraZeneca’s vaccine manufactured by the Serum Institute of India because the shots were not administered before the April 13 expiry date on the packaging. The doses were supplied via the AU thanks to a donation from telecoms group MTN.

South Sudan has set aside 59,000 doses supplied by the AU and does not plan to use them because of the same expiry issue, a government official told Reuters last week.

But Nkengasong, the continent’s top public health official, said the Africa CDC had informed countries receiving the donations that the shots could be used until mid-July, based on a further analysis conducted by the Serum Institute.”

The COVAX vaccine-sharing plan said it is seeking to bolster its supplies of COVID-19 vaccines for poor countries from new manufacturers as it aims to mitigate supply problems of the AstraZeneca shot from India.

The global programme – co-led by the GAVI vaccine alliance and the World Health Organization (WHO) – said that while it was hoping to restart deliveries of doses from India’s Serum Institute to COVAX participating countries “as soon as possible”, it was also looking for additional potential supplies.

Serum said on Wednesday it hoped to raise its monthly output of the AstraZeneca COVID-19 shot to 100 million doses by July from 60-70 million now, later than a previous timeline of end-May.

“Anticipating these types of barriers is one of the reasons COVAX has sought to diversify its portfolio from the beginning,” a GAVI spokesperson told Reuters. “We are in conversations with other manufacturers of other candidates on supply schedules.

The European Commission has said no decision had yet been taken on whether to launch legal action against AstraZeneca over a shortfall in deliveries of coronavirus vaccine doses, after Ireland’s health minister said the case had been initiated.

Health Minister Stephen Donnelly on Thursday told the Irish parliament that “a legal case has been initiated by the commission and earlier this week I have joined Ireland as one of the parties to that legal case.”

“No decision to launch legal actions has been taken at this point in time,” a spokesman for the European Commission said.

Deal for Sputnik V to manufacture doses in Cairo

Developers of the Russian COVID-19 vaccine say they signed a deal with a leading Egyptian pharmaceutical company to manufacture more than 40 million doses annually in Cairo.

The Russian Direct Investment Fund, along with Egypt’s Minapharm and its Berlin-based subsidiary, issued a joint press release saying the technology transfer will begin immediately. It expects the roll out of the Sputnik V vaccine in the third quarter of 2021.

The production will take place in Minapharm’s biotech facility in Cairo for global distribution.

CEO of the Russian Direct Investment Fund Kirill Dmitriev says in the release: “The Russian vaccine is highly efficient and trusted by regulators around the world and makes a huge contribution in the fight against coronavirus.”

COVID 3rd wave peak in France ‘appears to be behind us’: PM

The peak of the third wave of the COVID-19 pandemic in France “appears to be behind us”, Prime Minister Jean Castex said, and travel restrictions will be relaxed from early next month.

Castex told reporters there had been a “genuine fall in the circulation of the virus over the last 10 days”, confirming that restrictions confining people to a 10km (six-mile) radius of their homes would be dropped from May 3.

New infections rose by 34,318 on Thursday, a 4.25 percent increase versus the same day last week, the lowest rise since March 13. The seven-day moving average of daily new cases stood at 31,532, falling below 32,000 for the first time since March 23.

The European Commission is looking to launch legal action against AstraZeneca for underdelivering COVID-19 vaccine doses to the EU, hobbling the bloc’s early rollout of jabs, diplomats said.

They said any lawsuit against AstraZeneca would begin in a Belgian court — the jurisdiction agreed under the commission’s contract with the British-Swedish pharmaceutical company.

A Commission spokesman, Stefan De Keersmaecker said: “As you know, AstraZeneca is not delivering the number of doses which have been agreed upon in the contract… This is one of the reasons why we keep our options open together with member states to take any further steps.”

The Syrian government received a batch of 203,000 COVID-19 vaccines, the health minister said, part of a push to speed up a sluggish inoculation process in the war-torn country.

The arrival of the United Nations-secured jabs came as a new wave of infections overwhelms medical centers around Syria. The AstraZeneca vaccines are part of a campaign aiming to vaccinate 20 percent of the country’s population before the end of the year.

Health Minister Hassan Ghabbash made the announcement during a news conference held in the capital Damascus. He said the vaccine will be given first to frontline workers, the elderly and those with chronic diseases.

The Syrian government has registered over 21,500 cases – including 1,483 deaths – in areas under its control since the first case was reported in March 2020. Over 21,000 infections and over 640 deaths have been recorded in rebel-held northwestern Syria, while the Kurdish areas in the northeast registered 14,400 cases including 477 deaths.

A Norwegian climber hoping to summit Everest has confirmed that he has tested positive for COVID-19, in a blow to Nepal’s hopes for a bumper mountaineering season on the world’s highest peak.

The pandemic wiped out last year’s season but Nepal has eased quarantine rules in an effort to attract more climbers despite the difficulties of treating them if they contract the virus.

“My diagnosis is COVID-19,” Erlend Ness told AFP in a Facebook message. “I’m doing ok now… The hospital is taking care (of me).”

Ness was evacuated from the slopes by helicopter and taken to a hospital in the Nepali capital Kathmandu after spending time at Everest base camp.

Norwegian broadcaster NRK, which interviewed him, reported that a sherpa in his party had also tested positive.

Sweden not ready to lift COVID restrictions, but PM says end in sight

Sweden, which has shunned lockdowns throughout the pandemic, will postpone a tentative plan to ease some COVID-19 restrictions, due to the ongoing high levels of new infections, the government said.

Sweden is experiencing a third wave of the virus and the number of patients being treated in intensive care is at the highest level since the spring of last year.

“When the strain on healthcare eases and the spread of infection drops, only then will the government be ready to start lifting restrictions,” Prime Minister Stefan Lofven told a news conference. “But we are not there yet.”

The restrictions will be prolonged until mid-May and mean restaurants will have to close at 8.30pm and that shops and malls can only let in limited numbers of customers. Sport venues and public pools will remain effectively closed to visitors.

“Right now there are no beds, no oxygen. Everything else is secondary,” said Shahid Jameel, a virologist and director of the Trivedi School of Biosciences at Ashoka University.

Six hospitals in New Delhi had run out of oxygen, according to a tally shared by the city government, and the city’s deputy chief minister said neighbouring states were holding back supplies for their own needs.

Another 2,104 people died in the space of a day, taking India’s cumulative toll to 184,657, according to the health ministry data.

The previous record rise in cases was in the United States, which had 297,430 new cases on one day in January, though its infection rate has since fallen sharply.

Tunisia runs out of intensive care beds as variant spreads

Tunisian hospitals have run out of intensive care beds amid a surge in COVID-19 cases, a member of the independent scientific committee that advises the government said.

Amenallah Messadi told Reuters the health system had been pushed to the point of collapse by a rise in cases driven by the more infectious coronavirus variant first detected in Britain.

“The situation is very critical, medical staff are exhausted, ICUs have reached their maximum capacity and deaths are on the rise,” he said.

Tunisia has recorded 291,000 coronavirus cases and about 10,000 deaths. The daily death rate which has hovered around 80 for the past two weeks reached 95 on Tuesday.

According to India’s health ministry, deaths rose by a record 2,104 in the past 24 hours, raising the country’s overall death toll to 184,657.

But how has India’s economy held up?

After shrinking by a record 24.4 percent in the three months through June 2020 – which was “consistent with the stringency of the lockdown” the government imposed at the time, according to Barclays India Economist Rahul Bajoria – economic activity picked up and eked out a growth rate of 0.4 percent for the quarter ending December compared to the same period the year before, latest figures show. 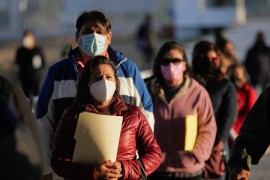 Amid a limited supply of vaccines, COVID-19 cases have been on the rise across the Americas, PAHO officials said. 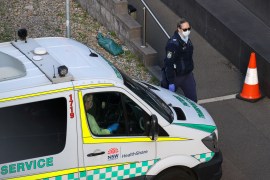 Cases reported in Sydney and Perth hotels among people who arrived from different countries at different times.

Police officer tested positive for COVID after working on the relay in Kagawa prefecture on Japan’s island of Shikoku.