A leaked document which advocates for partitioning Bosnia and Herzegovina has reportedly reached the European Union (EU), stirring concerns of renewed violence in the Balkans region.

Though there are questions over the so-called non-paper’s authenticity, top officials have responded to the alleged proposal to draw borders along ethnic lines with some alarm.

Bosnian Foreign Minister Bisera Turkovic told Al Jazeera that any move towards revision of the current borders is undoubtedly a “revival of the aggression that we saw in the 1990s.”

However, Turkovic said that she believes that “no one serious” in the European Union would accept the idea of jeopardising Bosnia’s sovereignty and integrity.

“The goal seems to be the opening of a Pandora’s box and destabilisation of the situation in the Western Balkans,” Turkovic said. “Perhaps some believe they could achieve their wartime goals in such circumstances.”

Turkovic added that the “malicious idea … threatens the enormous progress made in the last two decades”.

“Everybody should understand that those who are considering this as an option are rewarding and promoting the policy that is responsible for the genocide, and the worst war crimes since World War II,” Turkovic said. “One could perhaps argue that by analogy, they themselves become complicit in it.”

The unsigned memo in question was leaked last week by Slovenian media.

It proposes Bosnia to be partitioned into three parts, with its Serb-run entity of Republika Srpska unifying with Serbia and the country’s Croat-majority cantons joining Croatia.

In return, “Serbia is willing to agree on joining Kosovo with Albania,” the memo reportedly said. 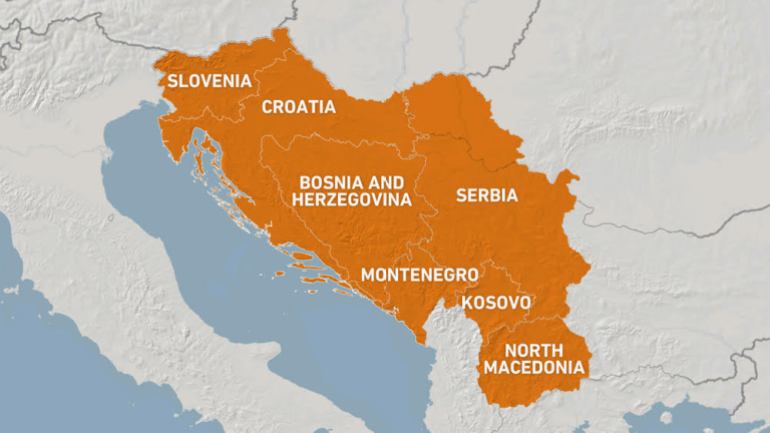 “The main issue of the Western Balkan region… is the unresolved national issues of Serbs, Albanians and Croatians,” it said, adding that “nobody is satisfied with the situation in Bosnia and Herzegovina.”

It added that currently “EU membership for Bosnia and Herzegovina is fully excluded,” and that “it is difficult to image” EU perspectives for Serbia and Kosovo.

The memo said that “in a silent procedure”, verifying support for the plan is “underway” with decision-makers in the region and international community.

While Slovenia has dismissed the idea that the memo came from Ljubljana, Albania’s Prime Minister Edi Rama said he has seen such a document. Further complicating matters, Serbian President Aleksandar Vucic denies the memo exists.

The news broke on April 12, when Bosnian news website politicki.ba reported that one of Jansa’s priorities, when Slovenia presides over the EU from July 1, is to redraw the borders of former Yugoslavia.

Citing sources from Ljubljana and Brussels, the article reported that the non-paper was submitted to European Council (EC) President Charles Michel end of February or early March.

Responding to the news, Jansa tweeted that he last saw Michel in 2020, and it would therefore have been difficult for him to physically hand over anything to him in February or March.

But an anonymous official in Brussels told politicki.ba that several figures supported the idea of redrawing borders including Hungarian Prime Minister Viktor Orban, members of the European far right, and Croatian officials.

The article added that Albanian-majority areas of Montenegro and North Macedonia are also envisioned to join with Albania.

Slovenian journalist Primoz Cirman, who covered the story, said the memo may have been drafted in Zagreb, Budapest or Belgrade, but that he was certain Jansa’s cabinet took part in its distribution.

On Tuesday, Bosnian news agency Patria reported that according to its sources close to the Bundestag, the highest representatives of Germany were introduced to the non-paper as early as October, but the proposals were condemned.

The document also reportedly states that Bosnians in their independent state would need “to choose between an EU and a non-EU (i.e Turkey-aligned) future”, but warned that with “an increasingly stronger influence of Turkey and radical Islam, the situation can drastically deteriorate over the next decade”.

“The framing suggests that bit was meant to appeal to Islamophobic sentiments within the EU … The paper is internally incoherent, among its many other problems,” Mujanovic said.

‘No right to secede’

From 1992 to 1995, Bosnia was under attack by Serb and Croat forces aiming to carve the country up into a Greater Serbia and a Greater Croatia, respectively.

The international armed conflict culminated in a genocide in Srebrenica, Bosnia – the worst atrocity committed in Europe since the Holocaust.

The Dayton Peace Agreement signed in December 1995 officially ended the war but divided Bosnia into two entities – the Serb-run entity of Republika Srpska and the Bosniak-Croat Federation entity.

On Friday, Slovenian President Borut Pahor rejected the idea of redrawing borders, adding that “it’s best for the EU to include all countries of the Western Balkans in the EU.”

However, on March 5, Pahor had asked the three members of Bosnia’s presidency if a peaceful dissolution, or separation of the country, was possible.

“Lately, there has been increasing talk in Europe that the disintegration of Yugoslavia should be completed,” Pahor had told the presidents, according to the Bosnian news website Istraga.

Bosniak and Croat members of the presidency replied that anyone who promotes ideas of a dissolution is attempting to push the country and region into war.

Dodik has been calling for Republika Srpska to secede for years and since meeting with Pahor, his talk of secession has notably increased.

This week, Dodik launched an ad campaign on YouTube advocating for a “peaceful separation” of Bosnia, citing the country’s dysfunction. In statements to the press, he has reiterated he is not calling for war.

However, Ismail Cidic, head of the Sarajevo-based Bosnian Advocacy Centre, told Al Jazeera: “It is extremely improbable that any type of secession or division of Bosnia will be achieved without a war.”

Bosnia’s Office of the High Representative reassured in a statement that “the time for redrawing borders has passed,” and that the “Dayton Peace Agreement does not offer the possibility of state disintegration”.

Cidic said while there are mechanisms in place to prevent division, this “does not mean that Dodik’s regime is not working on changing the so-called ‘facts on the ground’ while waiting for circumstances to change.

“He understands that it might not be him who will proclaim independence or secession, but he is leaving a solid legacy for anyone who would succeed him in the future.”

On Wednesday, it was reported that the Bosniak SDA party had called on the Peace Implementation Council, an international body tasked with implementing the Dayton Peace Agreement, to place Dodik under sanctions over his threats of secession.

Mujanovic told Al Jazeera: “It’s hard to imagine any scenario in which any attempt of secession or partition of BiH – or Kosovo or North Macedonia – doesn’t immediately set off significant violence. It’s just a non-starter.

“It’s imperative the pro-Bosnian bloc creates a unified response and strategy to respond to the worst-case scenario, and that they also coordinate this, as much as is possible, with NATO leaders.

“The US in particular should be brought on side to the greatest extent possible, to ensure that no actual adventurism is attempted, and if it is, that there be a swift, and effective local-international response.”