Disruption in the supply of medical oxygen has killed at least 22 patients in a hospital in western India’s Maharashtra state, officials have said.

Suraj Mandhare, an official in the Nashik district of Maharashtra, said an oxygen tanker leaked outside a hospital in the city, halting its supply for about half an hour. He said the supply of oxygen has since resumed to other patients.

Fire officer Sanjay Bairagi said the leakage was plugged by the fire service within 15 minutes, but there was supply disruption in the Zakir Hussain Hospital.

Surinder Sonone, a police officer, said the leak occurred in a pipe connecting the oxygen supply to the main tank in the hospital complex.

Five of the 140 COVID-19 patients were shifted to another hospital, he said.

Hospital authorities said whoever was responsible would be held to account, Al Jazeera’s Elizabeth Puranam reported from New Delhi.

“Accidents in hospitals are not uncommon. There have been a number of fires in the past year in hospitals and many COVID patients have died as a result,” she said.

Maharashtra is India’s worst-hit state by the latest surge in coronavirus cases in the country, accounting for more than a quarter of daily infections.

India’s health ministry reported 295,041 new cases on Wednesday with 2,023 deaths, taking total fatalities to 182,553. India has since the start of the pandemic recorded 15.6 million cases, the second highest behind the United States.

Nationwide Newly reported cases have exceeded 200,000 each day for a week – with people being infected faster than they can be tested.

In recent days, India has been on edge about oxygen supplies with thousands of patients in need of breathing support and supplies running short amid record surge in cases.

“When oxygen supply was planned planned last year, this was probably keeping in mind the local demand then. The local demand now has really peaked – and perhaps what we are seeing now is not enough forecasting, ” he said via Skype from Ahmedabad, Gujarat state.

Bhan added the surge in cases this year was “much more sharper” and that “lessons from last year perhaps were not registered adequately”.

“The recognition that those who need admission [in hospitals], certainly need oxygen – and the number of cases, who were admitted would increase exponentially as we are seeing right now, and that there will be a possibility of shortage of oxygen,” he said.

“This is what policymakers and health officials should’ve have thought through.”

In some parts of India, the crisis has led to people stealing oxygen, according to hospital authorities.

“Some relatives of patients are taking two or three cylinders with them, some are even taking them in their vehicles,” surgeon Mamta Timori in Damoh, Madhya Pradesh told Al Jazeera.

“When are staff tries to reason with them, they attack them, even threatening to hurt them,” he added.

In a televised address to the nation on Tuesday night, Prime Minister Narendra Modi tried to boost spirits by saying the government and the pharmaceutical industry were stepping up efforts to meet the shortages of hospital beds, oxygen, tests and vaccines.

But, he admitted, the “surge in infections has come like a storm and a big battle lies ahead”. 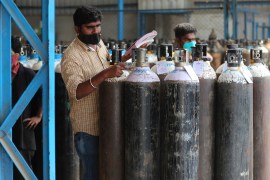 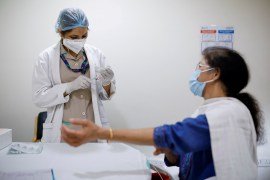 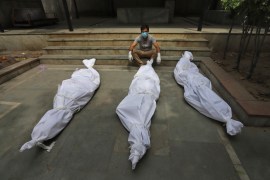 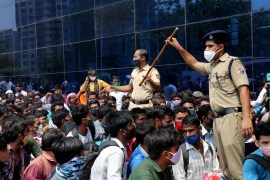