While the year 2020 witnessed an overall decline in the number of global death penalties, some countries increased the number of executions they carried out.

In its annual global review of the death penalty (PDF), Amnesty International said that the unprecedented challenge of the coronavirus pandemic contributed to a trend of decline in global executions between January and December 2020. But authorities in 18 countries continued executing last year.

Amnesty relied on official figures, judgements, media reports and information from families, individuals and civil societies to collate data for its report titled Death Sentences and Executions in 2020.

Commenting on the findings, Agnes Callamard, the secretary-general of Amnesty International, said in a statement: “As the world focused on finding ways to protect lives from COVID-19, several governments showed a disturbing determination to resort to the death penalty and execute people no matter what.”

“The death penalty is an abhorrent punishment and pursuing executions in the middle of a pandemic further highlights its inherent cruelty,” Callamard said, adding that many people on death row were unable to access in-person legal representation under these conditions, which is considered “a particularly egregious assault on human rights”.

Although the figures in the report provided an overall reflection of the global breakdown of executions in 2020, they were on the lower end of estimates for many countries.

Data on the use of the death penalty is classified information in some countries, including China and Vietnam, whereas in countries like Laos and North Korea, little or no information is available due to restrictive state practices.

China is believed to be “the world’s most prolific executioner”, executing thousands of people each year, said the report.

But with Chinese authorities classifying the total number of death sentences and executions as state secrets, it is difficult to verify the exact number carried out.

After China, four Middle Eastern countries – Iran, Egypt, Iraq and Saudi Arabia – accounted for 88 percent of all known executions in 2020, said the report.

Iran came in as the second-highest global executioner with more than 246 executions carried out between January and December 2020.

Among those executed was journalist Ruhollah Zam, who was hung on December 12. He was once-exiled over his online work that helped inspire nationwide economic protests in 2017.

Coming in third was Egypt, which at 107 executions, tripled the number of yearly executions in 2020 compared with the year before.

The 2020 toll was the highest since the number of executions peaked in 2013, following the military overthrow in July 2013 of Egypt’s first democratically elected President Mohamed Morsi. At least 109 executions were carried out in 2013, according to Amnesty.

Dozens of those executions were related to political violence. Many of the trials were marred by serious human rights violations, including torture and enforced disappearances, said the report.

The spike in executions in Egypt occurred between October and November when the government executed 57 people, including four women. Several human rights organisations decried the executions.

In fourth place, Iraq executed more than 45 people last year. That total was still less than half the number of executions carried out by the Iraqi authorities in 2019, said the report.

Several of those cases involved prisoners in terrorism-related crimes, who according to the United Nations human rights experts, faced trials that were unjust.

With at least 27 executions, Saudi Arabia was considered the fifth top global executioner in 2020, according to the report.

Despite this, the number of recorded executions in Saudi Arabia fell by 85 percent from 184 in 2019.

Criticism of Saudi Arabia’s human rights record has grown since King Salman named his son Prince Mohammed bin Salman (MBS) as crown prince and heir to the throne in June 2017 and Saudi journalist Jamal Khashoggi was murdered inside the Saudi consulate in the Turkish city of Istanbul in October 2018.

In a huge setback, the US became the only country in the Americas to carry out executions in 2020 after the Trump administration carried out the first federal execution in 17 years in July 2020.

And yet, in 2020, the US reached its lowest figure of executions in almost 30 years. 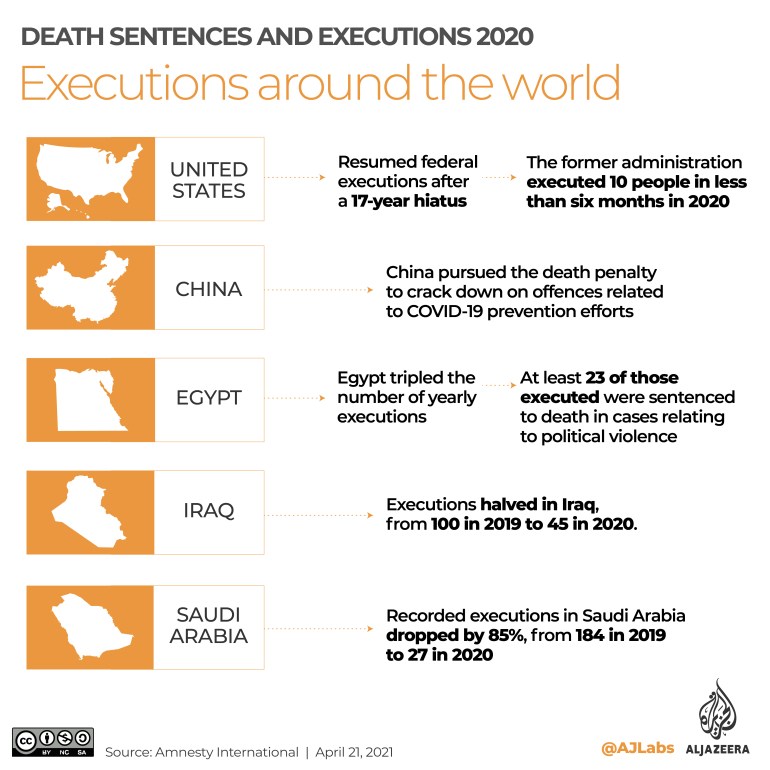 Additionally, Amnesty recorded several executions that violated international law including one public execution and three people executed for crimes that occurred below the age of 18 in Iran.

In violation of international law, people with mental or intellectual disabilities were also put to death in countries including the US, Japan, the Maldives and Pakistan, said the report.

Meanwhile, many counties are believed to have imposed death sentences following proceedings that did not meet international standards for fair trials in Bahrain, Bangladesh, Egypt and Singapore among others.

In China, Iran and Saudi Arabia at least 30 executions were linked to drug-related offences.

The total number of known global executions in 2020 was at least 483, said the report, which marked the lowest number of executions recorded by Amnesty in at least 10 years.

The figure represented a 26-percent decrease in the number of executions compared with 2019 and a 70-percent fall from 1,634 global executions in 2015. This drop was primarily linked to reductions in Iraq and Saudi Arabia, according to the report.

At the same time, at 1,477 the report recorded a 36-percent decline in newly imposed death sentences in 2020 globally, compared with the previous year. According to the report, this decline was partly due to the coronavirus pandemic disrupting and delayed criminal proceedings globally.

No executions were recorded in several countries that executed people in the previous two years, including Afghanistan, Belarus, Japan, Singapore and Sudan.

With Kazakhstan committing to abolish the death penalty and Barbados concluding reforms to repeal the mandatory death penalty, the number of countries that abolished it in law or practice reached 144.

“Despite the continued pursuit of the death penalty by some governments, the overall picture in 2020 was positive,” said Callamard.

“We urge leaders in all countries that have not yet repealed this punishment to make 2021 the year that they end state-sanctioned killings for good,” she added.