Democratic US Representative Maxine Waters’s comments about the need for Black Lives Matter protesters to be more confrontational with authorities drew criticism from Republicans, as well as a rebuke from the judge in the George Floyd murder trial, now in jury deliberations in Minneapolis.

Waters, who is African American, speaking amid a crowd of protesters during the weekend said if Chauvin is not found guilty of Floyd’s killing, protests would need to be more confrontational.

Former Minneapolis police officer Derek Chauvin who held his knee on Floyd’s neck until he was unconscious is on trial on three counts of murder in the unarmed Black man’s death.

“If we don’t we cannot go away. We have got to get more confrontational. We have got to make sure that they know that we mean business,” said Waters, an 82-year-old Democrat now in her 16th term in office.

Chauvin’s defence lawyer Eric Nelson in court on Monday seized on Waters’ comments, televised by local news outlets, to argue that the jury would be influenced, and the judge should declare a mistrial.

“We have US representatives threatening acts of violence in relation to this specific case,” Nelson said.

Judge Peter Cahill, presiding over the trial, denied the defence’s motion for a mistrial but had harsh words for Waters and said that he believed her remarks give Chauvin grounds to appeal a guilty verdict.

“I wish elected officials would stop talking about this case, especially in a manner that is disrespectful to the rule of law and to the judicial branch and our function,” Cahill said from the bench on Monday.

“Their failure to do so I think is abhorrent,” the judge said.

The jury of 12 people is now sequestered as it deliberates behind closed doors whether to find Chauvin guilty on three charges of second-degree murder, third-degree murder and manslaughter.

US cities are bracing for a potential outbreak of protests around the verdict when it is delivered. Floyd’s death sparked enormous nationwide protests in the US last year.

In Washington, House Republicans said on Tuesday they planned to bring a censure motion to the House floor to reprimand Waters for the commentary.

House Speaker Nancy Pelosi, the top Democrat in the House, said she did not think Water’s comments crossed a line defending her against Republican claims she was trying to stoke violence. Democrats are also criticising Republicans for speaking out against Waters but not against former President Donald Trump, who they believe incited the violence during a riot at the US Capitol on January 6.

But “it’s a powder keg down there,” said Scalise, the number-two Republican in the House leadership, about the threat of violent protests in Minneapolis. “The last thing you want to do is make it worse, and especially to give grounds for an appeal,” he said.

“And look, we all watched what happened and saw officer Chauvin crossed the line. We should be all focused on making sure that justice is carried out,” he said.

“The last thing you want to do is give a ground for appeal.” 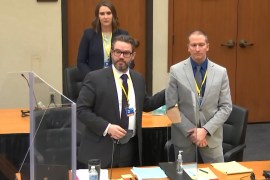 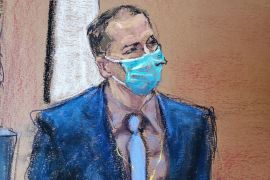 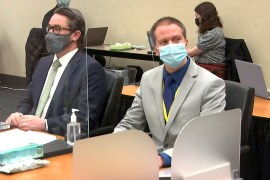