Residents of Chad’s capital, N’Djamena, have reacted with shock and surprise at the news that longtime President Idriss Deby died just a day after he was declared the winner of last week’s presidential election.

The 68-year-old, who came to power in a 1990 rebellion, succumbed to wounds suffered during a visit to the battlefield in the country’s north where Chadian soldiers fought against a rebel group, the military announced on Tuesday.

Deby’s 37-year-old son, four-star General Mahamat Idriss Deby, was swiftly named as the interim leader of an 18-month military transitional council. The army said “free and transparent” elections will take place after the transition period. Calling for calm, it also announced a 6pm curfew and shut the country’s borders, while suspending the constitution and dissolving the National Assembly.

“In the face of this worrying situation, the people of Chad must show their commitment to peace, to stability and to national cohesion,” General Azem Bermandoa Agouma said in the broadcast.

Experts said that under Chadian law, the speaker of parliament should have taken power after Deby’s death and not his son.

“N’Djamena is on edge,” said Al Jazeera’s Hiba Morgan, reporting from the capital. With the exact circumstances surrounding Deby’ death still unclear, the military has been keen to control the narrative, she added.

“They haven’t mentioned exactly when Deby sustained his injuries; they have also been very careful not to mention when he passed away and how long it took between the time he got injured and the time of his passing,” Morgan said. “These are details they’ve been very careful to control, that’s because they are worried about the reaction of the people in Chad, and specifically in N’Djamena.”

Tuesday’s stunning announcement came more than a week after fighters of the Libya-based Front for Change and Concord in Chad (FACT) attacked a border post on April 11, the day Chadians went to the polls to cast ballots in a vote boycotted by the country’s main opposition parties in the face of mounting discontent and calls for political change.

The rebels then advanced hundreds of kilometres south through the vast country, but the Chadian military on Saturday appeared to have slowed their progress in Kanem province, about 300km (185 miles) from N’Djamena.

“There was a lot of concern and tension in the capital, even prior to the announcement of Deby’s death,” Morgan said, referring to the rebels’ advance.

On Monday, there was panic in some areas of N’Djamena after tanks were seen on main roads. This prompted a government spokesman to take to Twitter to say that the deployment had been misunderstood and there was “no particular threat to fear”.

Following the army’s announcement of Deby’s death, presidential guard officers in civilian clothes roamed N’Djamena with walkie-talkies and handguns. Police in black uniforms and masks were also deployed, although the military presence was no more intensive than since the start of the rebel offensive.

A Reuters news agency reporter in N’Djamena said people were in a panic as news of Deby’s death spread, fearing that fighting could break out in the city. Many were fleeing to the outskirts and roads were jammed with traffic. Government offices and schools closed, while panicked parents sought their children.

‘Sad news for the country’

Meanwhile, authorities said a state funeral will be held on Friday. Heads of state and government of “friendly countries” will attend the ceremony in N’Djamena, before Deby is laid to rest in his home region in the country’s far east.

“The news is surprising. I’m moved by it,” Thierry Djikoloum, N’djamena resident, was quoted as saying by The Associated Press news agency. “The rumours that are going around about the transitional council give me the impression that some information is false. They are already talking about dissolving parliament. That is delicate. We have a constitution [to follow]. So for me, I’d say it was a coup d’etat. He was killed.”

“The presidential elections went off peacefully through to the declaration of results by the election commission (CENI). And then the next day, we learn the sad news of the death of President Deby Itno after being injured badly at the front,” Sabre said.

“It is sad news for the country.”

Nathaniel Powell, author of France’s Wars in Chad: Military Intervention and Decolonization in Africa, said the quick instalment of Mahamat Deby as interim head of state sent “a very strong message” to Chad’s international partners, including France and the United States, that they can expect continuity.

“There is a possibility for widespread protests in N’Djamena or elsewhere,” he told Al Jazeera. “It’s conceivable that the fact the rebellion that perhaps killed Deby in a series of combats north of N’Djamena may try to take the offensive again,” Powell added.

“But I think the opposition has been so divided, and the military factions that supported Deby and his son moved so swiftly, [that] it seems unlikely that a serious challenge will be able to appear in the immediate future – although there are lots of questions about the longer term.” 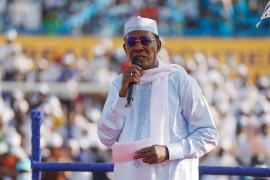 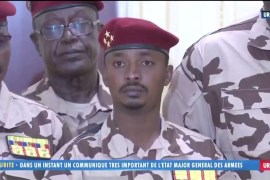 Army says 18-month interim gov’t to be headed by Deby’s son as it imposes nationwide curfew and shutters borders. 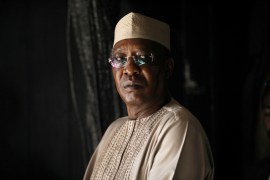