Editor’s note: This article has been revised for clarity on April 27. The original article was published on April 2, 2021.

All three programmes aimed to provide economic relief to distressed businesses and keep their workforce employed during the COVID-19 crisis in the worst-hit nation in the world.

Massachusetts-based Vishwa Hindu Parishad of America (VHPA) received more than $150,000 under PPP and a further $21,430 under EIDLA and DAL programmes.

VHPA’s Indian counterpart, Vishwa Hindu Parishad (VHP), was designated as a religious militant organisation by the World Factbook of the Central Intelligence Agency (CIA) for years.

VHP is an affiliate of Rashtriya Swayamsevak Sangh (RSS), a far-right Hindu nationalist organisation formed in 1925 along the lines of hardline nationalist groups in Europe, which aims to create an ethnic Hindu-majority state in India.

RSS is the ideological mentor of India’s governing Bharatiya Janata Party (BJP) and boasts of having Prime Minister Narendra Modi among millions of its members across India.

Although the VHPA, which now has 23 chapters in the US, claims to be legally separate from its Indian counterpart, its website mentions the group shares the “same values and ideals”.

American organizations such as the VHPA openly acknowledge that they are inspired by India’s Hindu nationalist organizations, such as the VHP and the RSS... Any American nonprofit that perpetuates Islamophobia and other forms of hate should not receive federal relief funds.

For decades, VHP has campaigned to turn India into a Hindu nation and stands accused of orchestrating numerous attacks on Muslims and Christians in hundreds of riots in various parts of the country.

The VHPA’s membership in the US swelled in the late 1980s after right-wing Hindu groups in India intensified their campaign to build a temple dedicated to Lord Ram at the exact site where a Mughal-era mosque stood in the north Indian town of Ayodhya.

Hindu groups claimed the 16th-century Babri Mosque, demolished by a mob in 1992, stood at the birthplace of Lord Ram. In a controversial judgment in 2019, India’s Supreme Court handed over the disputed site to a government-run trust to build a Ram temple.

The Muslim litigants were allotted five acres (two hectares) of land at an alternative site in a village 25km (15 miles) away to construct a mosque.

Ekal Vidyalaya Foundation of USA, an organisation affiliated with the RSS, obtained direct payment of  $7,000 and a loan of $64,462 under PPP.

Through its network of schools mainly in India’s tribal and rural areas, Ekal Vidyalaya has been accused of spreading the RSS agenda of Hindu supremacy and of promoting anti-minority hate among young children.

“The training to the teachers of Ekal schools was mainly to spread communal disharmony in the communities and also to inculcate a fundamentalist political ideology … creating enmity amongst communities on the basis of religion,” said a 2009 report by a committee set up by India’s Ministry of Human Resource Development.

Infinity Foundation, another Hindu nationalist organisation with ties to the RSS, received $51,872 in US federal funds in the wake of the coronavirus pandemic according to SBA data.

Infinity Foundation’s founder Rajiv Malhotra, a right-wing author, is often referred to as the “Ayn Rand of Internet Hindutva”, as the Hindu nationalist movement is known as.

Malhotra, 70, has been accused of targeting academics and scholars critical of right-wing Hindu groups and issuing divisive statements. He has also faced accusations of plagiarism, though that did not stop him from being appointed an honorary professor at the prestigious Jawaharlal Nehru University in New Delhi.

Malhotra’s foundation gives grants to researchers and universities to promote the Hindu nationalist ideology espoused by the RSS in academic spaces.

Ramesh Bhutada, an Indian-American businessman from Texas and national vice president of Hindu Swayamsevak Sangh (HSS), the US wing of RSS, also holds the position of board chairperson at Sewa International.

Of the five organisations, the Hindu American Foundation (HAF), a Washington-based advocacy group co-founded by former VHPA activist Mihir Meghani, received the lion’s share of federal funds with $378,064 in PPP loans and another $10,000 in EIDLA.

HAF lobbies to deflect any criticism of Modi government’s policies on Capitol Hill, the most recent being its vehement defence of the Citizenship Amendment Act (CAA), which the United Nations described as “fundamentally discriminatory”,  and India’s scrapping of the special constitutional status of Indian-administered Kashmir – both in 2019.

Though the HAF claims to be a “non-partisan organisation”, it has open links with RSS members. Ramesh Bhutada’s son Rishi is a member of the HAF board of directors and its treasurer.

According to the most recent tax returns of the Bhutada Family Foundation, it donated $47,500 to Sewa International and $30,000 each to HAF and HSS in 2018.

Al Jazeera reached out to the five organisations for their comments on receiving the US federal fund for COVID relief. The HAF and Ekal Vidyalaya Foundation declined to comment, while Infinity Foundation did not respond to repeated calls, emails and text messages.

Only VHPA and Sewa International responded to the allegations of supporting right-wing groups in India and how they plan to spend the pandemic funds they received from the US government.

“Almost every non-profit applied for these funds, and so did we. We will spend them as mandated by the CARES Act. We do not allocate money from the government funds to any activity outside the US,” VHPA president Ajay Shah told Al Jazeera.

When asked if his organisation financially supports groups affiliated to RSS, Shah said, “We comply with the government regulations and send money to several approved charitable organisations in India.”

However, many non-profits that feature in the list of Indian organisations VHPA supports under its Support A Child project have links with RSS. It also funds the VHP Foundation in New Delhi.

Sewa International’s communication director, Vidyasagar Tontalapur, said the organisation plans to use the federal funds to keep its “workers employed during the COVID-19 crisis”.

When asked about its RSS links, Tontalapur told Al Jazeera they collaborate with all “registered non-profit organisations across the world”.

Americans should be highly concerned that taxpayer-funded stimulus relief is being used by organisations and affiliates that have disturbing ties to those allegedly engaging in religious violence and bigotry overseas.

New York-based Sunita Viswanath, co-founder of Hindus for Human Rights, expressed concern that the US pandemic relief funds might end up furthering hate campaign against Muslims and other minorities in India.

“All the organizations you have mentioned are sympathetic to Hindutva ideology. American organizations such as the VHPA openly acknowledge that they are inspired by India’s Hindu nationalist organizations, such as the VHP and the RSS,” she told Al Jazeera. “Any American nonprofit that perpetuates Islamophobia and other forms of hate should not receive federal relief funds.”

In 2014, South Asian Citizen Web (SACW), an online platform that promotes dialogue on South Asia, released a report on Hindu non-profits in the US that were linked to Sangh Parivar – the umbrella term that refers to all the Hindu supremacist organisations linked to RSS.

The SACW report, based on an analysis of official tax records between 2001-2014, found that charity groups based in the US sent millions of dollars to RSS-affiliated organisations.

Between 2001-2012, both Ekal Vidyalaya Foundation and VHPA sent $27m and $3.9m respectively, according to the SACW report.

SEWA International spent $3.3m during the same period on various activities of right-wing groups in various parts of India, while Infinity Foundation gave $1.9m in grants to universities and researchers to promote the Hindu supremacist agenda.

Arvind Rajagopal, professor of media studies at New York University and author of Politics After Television: Hindu Nationalism and the Reshaping of the Public in India, said the RSS has been receiving foreign funding through its affiliates for a long time.

“An income tax officer in the 1990s alleged that large sums of money were flowing from the US and elsewhere into VHP in India, and from there to the RSS,” Rajagopal told Al Jazeera.

Rajagopal was referring to Vishwa Bandhu Gupta, a former income tax officer in India who in 1990 issued a notice to the VHP to disclose its income and expenditure.

The officer was transferred and later suspended by the government, allegedly following pressure from the BJP, which then was a coalition partner of the federal government.

“It is hard to doubt that Hindu organisations did not receive money from their foreign affiliates and other sources abroad,” added Rajagopal.

‘Americans should be concerned’

Brian Levin, professor of criminal justice and director of Center for the Study of Hate and Extremism at California State University, San Bernardino, raised concerns about COVID relief funds and loans being extended to organisations with ties to hardline groups.

“Americans should be highly concerned that taxpayer-funded stimulus relief is being used by organisations and affiliates that have disturbing ties to those allegedly engaging in religious violence and bigotry overseas,” Levin told Al Jazeera.

“Even more disturbing is that these funds could be replacing decking donation revenues caused by the pandemic.”

The SBA declined to comment on individual borrowers. It, however, said the PPP is a delegated lending process where participating lenders act as an agent of the government to approve and disburse loans.

“The SBA does not have detail on PPP loan disbursements. That is a third-party transaction between lender and borrower,” Shannon Giles, public affairs officer at SBA told Al Jazeera in an emailed statement.

Christian Picciolini, a former white supremacist and founder of Free Radicals Project, termed the disbursement of pandemic relief funds to right-wing Hindu groups as a “troubling example” of how extremists find ways to exploit the crisis and systems that are put in place to mitigate it.

“America certainly should not be funding, inadvertently or not, extremist groups or any groups or individuals tied to extremism or polarisation,” he told Al Jazeera. 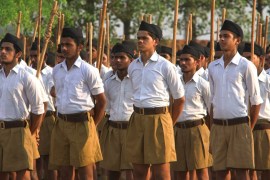 People & Power investigates India’s Hindu fundamentalists and their influence on the country’s government. 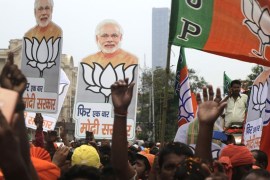 What you need to know about India’s BJP 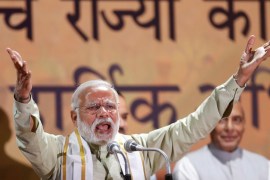 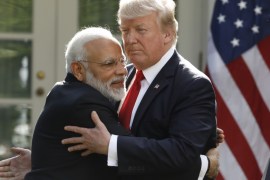