Ethiopia has declared a state of emergency in the southern part of the Amhara region in a bid to stem deadly ethnic violence.

The move comes after three days of violence in the town of Ataye, the defence ministry said, adding that troops have been deployed to quell the unrest. The ministry said an unspecified number of people were killed in the attacks.

The latest violence appears to have targeted Oromia special zones in the country’s second most populous regional state.

The Amhara region is dominated by the ethnic Amhara group – Ethiopia’s second largest – but the Oromo special zone is populated mainly by Oromos, the country’s largest ethnic group. 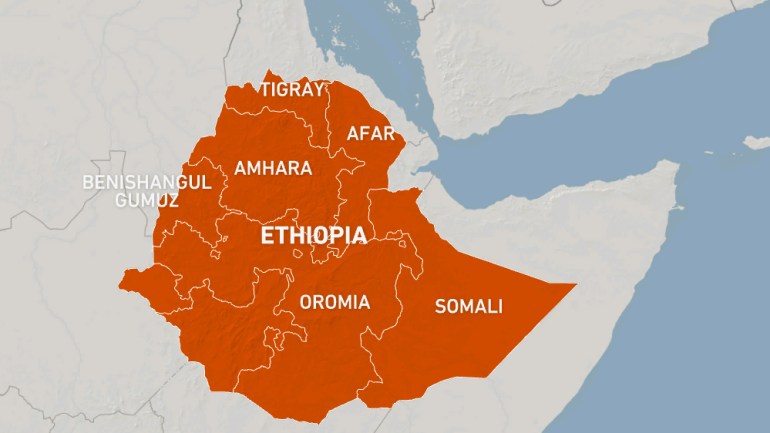 What is causing the violence in Amhara?

Ethiopia is made up of 10 semi-autonomous federal states organised along ethnic lines, and ethnic violence has soared in recent years.

Africa’s second most populous country is struggling to control several flashpoints where ethnic rivalries over land, power and resources have ignited ahead of national elections scheduled for June.

Civilians from ethnic groups living on both sides of the border between Amhara and Oromia have both been subject to attacks in recent months.

Conflicts have been largely fuelled by groups demanding more land and power, with attempts to drive out people they regard as outsiders.

OLF Shane, which says it is fighting for the rights of the Oromos, denied responsibility for the deadly attack. The OLF is an opposition party that spent years in exile but a ban on it was lifted after Ethiopian Prime Minister Abiy Ahmed took office in 2018.

Abiy came to power after several years of protests staged by Amhara and Oromo youth against the government, which was dominated for 30 years by the Tigray People’s Liberation Front (TPLF).

Abiy has promised to hold free and fair polls in June, but some of his reforms have also emboldened regional strongmen and groups angered by what they describe as decades of government repression.

The violence in Amhara has led to sniping between the Oromo and Amhara wings of Abiy’s Prosperity Party, which have publicly accused each other of responsibility.

Is ethnic violence happening in other regions?

In March, Ethiopia’s Amhara region rejected allegations of its forces’ involvement in “ethnic cleansing” in the country’s embattled Tigray region after the United States Secretary of State Antony Blinken called for the departure of troops from Amhara and those from neighbouring Eritrea.

Tigrayan officials accused forces from Amhara of forcing thousands of people off the land in western Tigray – a part of the region that ethnic Amharas claim rightfully belongs to them.

The UN says it has corroborated grave violations that could amount to “war crimes and crimes against humanity” in Ethiopia’s Tigray region by multiple parties, including by Eritrean troops.

Meanwhile, more than 100 people were killed earlier this month in border clashes between the Afar and Somali regions. The two regions blamed special forces from each other’s sides for the deaths.

Militias from the two eastern states have clashed before over disputed boundaries. In October last year, 27 people were killed in a wave of clashes over the border, with each side blaming the other.

In the Benishangul-Gumuz region at least 100 people, including children, were killed by assailants in December. The attackers torched homes, and shot and stabbed people as they tried to flee.

Amnesty International said it interviewed five survivors and an official who identified the attackers as members of the ethnic Gumuz community. The home the assailants attacked belong to Amhara, Oromos and Shinasha communities, they said.

How has the government responded?

Addis Ababa has sent federal troops to the affected areas.

In December, the army said they killed at least 40 suspects linked to the massacre in the Benishangul-Gumuz region.

Leaders from the Afar and Somali region have also held talks aimed at finding a breakthrough in their boundary disputes.