The Biden administration on Monday renewed United States sanctions on nine state-owned companies in Belarus for human rights violations by the regime of President Alexander Lukashenko.

The move by the US Treasury Department primarily forestalled potential future sales of US crude oil to the former Soviet-state, which US officials had hoped was looking for alternative sources to Russian supply for its refineries.

The US Department of State cited government suppression of political protests following the August 2020 re-election of Lukashenko, which the US has said was fraudulent.

The action came as a “consequence of the Belarusian authorities’ flagrant disregard for human rights and Belarus’ failure to comply with its obligations under international law” the US Secretary of State Antony Blinken said in a statement.

More than 340 political prisoners are being detained in Belarus, part of a political crackdown against dissent following Lukashenko’s re-election, according to the State Department.

“The United States calls on the Belarusian authorities to immediately and unconditional release all those unjustly detained or imprisoned,” Blinken said.

Blinken specifically named several political prisoners still being held whom US officials are concerned about.

Belarusian political figure Siarhei Tsikhanouski, who had intended to run against Lukashenko in 2020, was arrested before the August election and remains imprisoned. Protest leader Maria Kolesnikova was detained in September after a mass march against the Lukashenko government.

Blinken also cited the continuing imprisonment of blogger Ihar Losik, who has been on a hunger strike.

“The nine state-owned enterprises affected by this action, finance and support the Lukashenko regime, facilitating its violent repression of the Belarusian people and repeated rejection of the rule of law,” Blinken’s statement said.

The sanctions had been lifted since 2015 when the US and Western nations began trying to develop better relations with Belarus. The US had exported $112m in goods to Belarus in 2020, mostly medicines and cars, and imported $332m, mostly fertiliser, iron and steel, according the US government data.

In February, the US imposed travel restrictions on 43 Belarusian nationals identified as taking part in Lukashenko’s political crackdown. The travel sanctions  were triggered by the sentencing of two journalists who had live-streamed an enormous protest in Minsk against Lukashenko’s rule in November.

The European Union has also imposed travel and financial sanctions on Belarus officials and companies to no effect.

With support from Moscow, Lukashenko has refused to step down and blamed the protests on Western attempts to overthrow him.

Last month, police in Belarus detained as many as 175 people as they gathered for rallies against Lukashenko in several cities. 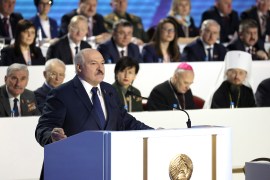 US hits Belarusian officials with travel bans for crackdown

US secretary of state announces sanctions on 43 Belarusian nationals hours after two journalists are sentenced. 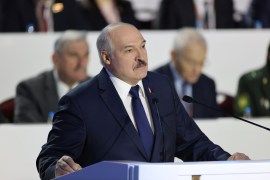 Belarus president, leader since 1994, says he has too much power

Embattled Lukashenko has promised a referendum on the constitution, but his opponents condemn the move as a sham. 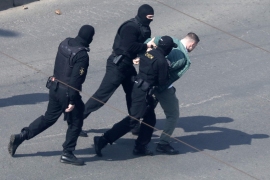