A monitoring group in Myanmar has appealed for international action, expressing concern over the torture and murder of anti-coup protesters in the Southeast Asian nation after the military broadcast images of six young detainees bearing severe signs of abuse.

In the pictures broadcast on military-owned MRTV on Sunday evening, the faces of four men and two women appeared bloodied and bruised. One of the women had a swollen jaw and what appeared to be a black eye.

“This junta uses torture as its policy,” the Assistance Association for Political Prisoners (AAPP) said in a tweet.

“If the international community does not act, torture and to death, will clearly continue.”

According to the AAPP, security forces have killed 737 people since the February 1 coup and rounded up 3,229 others across the country.

AAPP is concerned for all those detained particularly in undisclosed locations

If international community does not act. Torture, and to death, will clearly continue pic.twitter.com/6pGU3tSVT3

“The APP is concerned for all those detained, particularly in undisclosed locations,” it said.

#Myanmar’s military screened the pictures on the right – young women they had detained, bearing harrowing signs of abuse – on the nightly news today. They fact they felt free to show these images – and wanted to – speaks volumes. #WhatsHappeningInMyanmar pic.twitter.com/lt5CeNc06B

The six detainees were arrested on Sunday in Yankin, a suburb of Myanmar’s biggest city, Yangon, according to MRTV.

“The MRTV announcer said the six had been involved in a bombing on Saturday at 2pm (07:30 GMT), outside the Yankin government office in which three government soldiers had been injured. They did not provide more information that,” said Al Jazeera’s Tony Cheng, reporting from Bangkok, the capital of neighbouring Thailand.

“And we’ve seen the military government accuse people quite spuriously of crimes. We’ve also seen them use this tactic since the military coup, showing people in detention, presumably as a deterrent for those who are still going out and protesting.”

Myanmar has been in chaos since Senior General Ming Aung Hlaing seized power on February 1.

Amid continuing protests, killings and mass arrests, the United Nations has warned the situation in Myanmar may be heading “towards a full-blown conflict” – similar to the civil war gripping Syria in the Middle East.

‘We can be more brutal than you’

Kim Jolliffe, a researcher on Myanmar civilian and military relations, said the military’s decision to broadcast images of the six detainees was aimed at sowing fear.

“The Myanmar junta’s strategy from start to finish is based on the same gambit: ‘We can be more brutal than you. We can be more shockingly hurtful and terrifying than you’,” Jolliffe said in a tweet. “That is all they have. But it knows no bounds.”

The #Myanmar junta's strategy from start to finish is based on the same gambit:

"We can be more brutal than you…

We can be more shockingly hurtful and terrifying than you"

Twitter users compiled images of the six people before and after their arrests, with some appealing to protesters not to give up on showing their opposition to the coup.

“This is the kind of junta we’re facing,” wrote Twitter user Shwe Yee. “We must not give up what we’re doing for our freedom. You can’t suppress us with fear.”

The violence has drawn condemnation from Western countries and unprecedented criticism from several members of the Association of Southeast Asian Nations (ASEAN), which Myanmar joined under a previous military government.

The 10-member group has been trying to find a way out of the turmoil wracking Myanmar but the military has shown little willingness to engage with its neighbours and no sign of wanting to talk to members of the civilian government it toppled.

But in the first hint of progress for the grouping, a Thai government official said on Saturday that Min Aung Hlaing would attend an ASEAN summit in Indonesia on April 24, his first meeting with foreign leaders since he seized power.

ASEAN’s invite has prompted outrage in Myanmar, however, with a newly formed National Unity Government – made up of deposed members of the elected parliament and other opponents of the military – appealing to the regional bloc to negotiate with it instead of the military.

“There is broad disapproval within Myanmar,” said Al Jazeera’s Cheng. “They would like ASEAN to be speaking to the National Unity Government. They are very concerned that if Min Aung Hlaing is accepted into the fold at this ASEAN meeting, it’ll make it much easier for the military to impose control over Myanmar and to legitimise their coup.”

The military toppled Nobel laureate Aung San Suu Kyi’s elected government after alleging widespread fraud in an election that her National League for Democracy won by a landslide last November. The election commission, however, denies the claims.

Aung San Suu Kyi, 75, has not been seen in public since her detention on the day of the coup.

She now faces a raft of criminal charges that could see her barred for life from office. 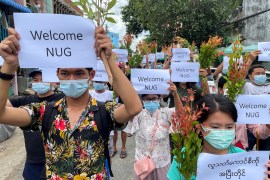 Parallel ‘national unity government’ says it wants to take part in crisis talks scheduled for next week in Indonesia. 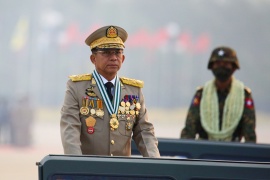 Min Aung Hlaing to take part in a summit attended by leaders of Southeast Asian nations in Indonesia next week. 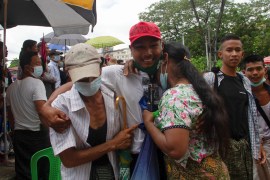 More than 23,184 prisoners from jails across the country to be released but many were jailed before the February coup.