Hong Kong media tycoon Jimmy Lai was jailed for 12 months on Friday along with four other veteran democracy activists for helping to lead one of the city’s biggest-ever protests.

Lai was among nine of Hong Kong’s most prominent democracy campaigners found guilty of organising and participating in the rally.

Many of them have spent decades advocating non-violence in their ultimately fruitless campaign for universal suffrage.

Lai, 73, was sentenced to 12 months in prison while four other campaigners were jailed for between eight and 18 months.

Organisers say 1.7 million people – almost one quarter of Hong Kong’s population – turned out for a huge rally that formed the backbone of demonstrations that wracked the city throughout 2019.

Among the other defendants were Martin Lee, 82, a respected barrister known as the “father of democracy” in Hong Kong, who was once chosen by Beijing to help write the city’s mini-constitution.

They also include Margaret Ng, a 73-year-old barrister and former opposition lawmaker.

Lee and Ng were also given prison terms, but their sentences were suspended.

Outside of the court, the crowd reportedly turned tearful as they hugged and cheered after hearing Ng’s suspended sentence. But they also denounced the jailing of other politicians and activists.

Responding to the sentencing, Amnesty International’s Asia-Pacific Regional Director Yamini Mishra said that the court decision “underlines the Hong Kong government’s intention to eliminate all political opposition in the city.”

“These convictions are a violation of international law, which states that participating in and organizing peaceful assemblies does not require prior permission by the state. The prosecution’s case against these activists is simply not tenable.”

Lai was brought to the court from custody, where he was being held after arrest under Beijing’s new national security law.

It marks the first time that Lai, one of Hong Kong’s most prominent pro-democracy supporters, who has been in jail since December after being denied bail in a separate national security case, was sentenced.

About 100 people queued outside the court early on Friday to get a seat for the hearing.

“It was already very difficult to fight for democracy and freedom in the past. With the national security law, it’s even harder,” 19-year-old student Yan told the Reuters news agency, referring to the sweeping legislation imposed by China last year.

“We need to believe in our faith and wait for the time to come again,” said the student, who declined to give his full name because of the sensitivity of the subject. Diplomats from a number of Western countries were also among those queueing.

The defendants have already been found guilty of taking part in the unauthorised assemblies on August 18 and August 31..

The repeated arrests of Lai and other pro-democracy politicians and activists have drawn criticism from Western governments and international rights groups, who have raised concerns over waning freedoms in the territory, whose people were guaranteed civic rights and freedoms unknown on the mainland when it was returned to Chinese rule in 1997.

When announcing her verdict Judge Amanda Woodcock said the march had caused serious traffic disruption and the fact that it was peaceful was no defence.

As he entered the court on Friday, Lee said: “I feel completely relaxed, I’m ready to face my sentence.”

The charges relate to a giant rally that held in Victoria Park when hundreds of thousands of people turned out, filling the park and spilling onto the streets. The police had denied permission for the group to march as they had originally wanted.

“There is no right so precious to the people of Hong Kong as the freedom of expression and the freedom of peaceful assembly,” Ng said as she discharged her legal team and gave her own statement in mitigation.

She added that she was prepared to stand with and stand up for the people who “in the last resort, had to give collective expression of their anguish and urge the government to respond”.

“I stand the law’s good servant but the people’s first,” said Ng, whose submission ended with a round of loud applause in courtroom.

In the second trial, the same judge found Lai and Lee guilty together with politician and academic, Yeung Sum. During those demonstrations, police fired tear gas and water cannon at the protesters, some of whom threw petrol bombs.

Lee posted on Facebook late on Thursday that he expected to go to jail but that his mind was “free as the ocean and the sky.”

The 2019 pro-democracy protests were triggered by the government’s plan for an extradition bill with the mainland and heightened by Beijing’s tightening squeeze on Hong Kong, creating the territory’s biggest crisis since the handover.

Beijing has since cemented its grip with the national security law, which punishes anything it deems as secession, subversion, terrorism or collusion with foreign forces with up to life in prison.

Supporters of the law say it has brought back stability to the territory. Critics say it has criminalised dissent.

“These prosecutions come at a time China is seeking to restore order in Hong Kong through its national security law and national security is being drilled into people at all levels now,” said Al Jazeera’s Adrian Brown who is outside the court.

Lai, the founder of the Apple Daily tabloid, has been a frequent visitor to Washington, DC, meeting officials including former US Secretary of State Mike Pompeo, to rally support for Hong Kong democracy. Beijing has labelled him a “traitor”.

Lai is scheduled for two more court mentions on Friday, in the national security trial where he is charged with collusion with a foreign country and a case related to the Apple Daily’s lease. Dozens of police swooped on the newspaper’s headquarters last August following Lai’s arrest.

Earlier this week, the tabloid published a hand-written letter Lai sent to his colleagues from prison, saying: “It is our responsibility as journalists to seek justice. As long as we are not blinded by unjust temptations, as long as we do not let evil get its way through us, we are fulfilling our responsibility.”

It is “time for us to stand tall,” he wrote. 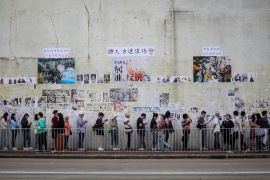 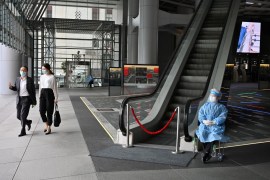 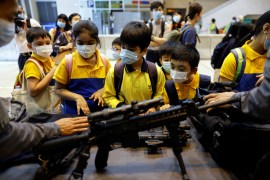 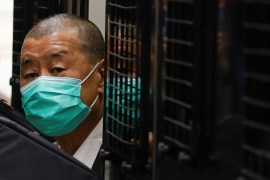