By Filipe Pacheco and Simone FoxmanBloomberg

Qatari stocks rose the most in a year after the country said it may allow foreign investors to fully own listed companies, a move that could trigger more than $1 billion of overseas inflows.

The cabinet approved a draft law that will allow overseas investors to own up to 100% of listed companies, according to the state-run Qatar News Agency. If the law is implemented, companies would have to individually approve the increased limit.

While implementation is yet to be confirmed, the decision could trigger inflows of about $1.5 billion into listed companies that would earn bigger representation in global benchmarks, according to estimates by investment bank EFG-Hermes. The QE Index gained 2.8% Thursday, the most in more than a year, to close at the highest level since Jan. 14.

Stocks that could benefit the most include Qatar Islamic Bank SAQ, Masraf Al Rayan QSC and the Commercial Bank of Qatar, the investment bank said. Their shares climbed 8.3%, 5.5% and 10% on Thursday, respectively, leading gains among members of the main gauge. 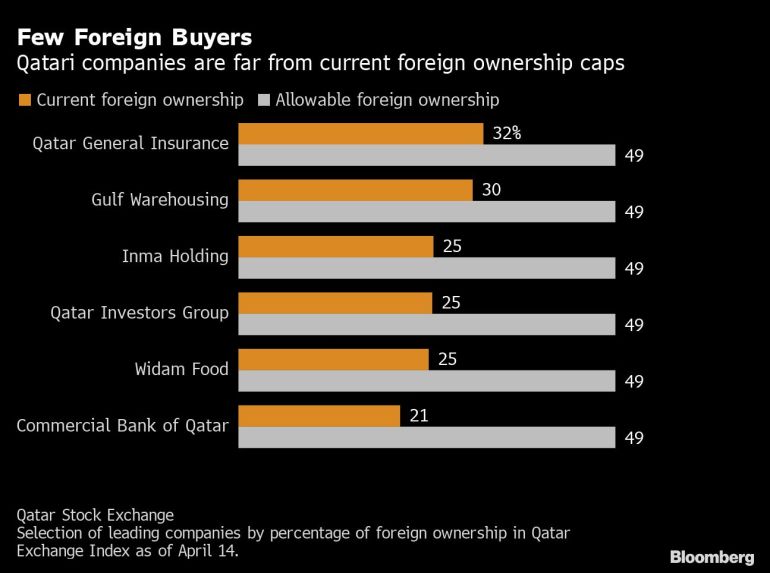 The gas-rich nation is following similar decisions by other Gulf countries as they seek to attract inflows from abroad. In 2019, the United Arab Emirates said it would allow foreigners to own 100% of businesses across industries and Saudi Arabia removed a cap on ownership of publicly traded companies for foreign strategic investors.

The proposal is “another milestone on the path to liberalising the economy, with Qatar setting the foreign ownership standard for the region,” said Akber Khan, senior director of asset management at Al Rayan Investment in Doha.

The ministers also announced the extension of pandemic-prompted financial support for private businesses, particularly the extension of a guarantee program that allowed some companies to borrow money interest-free to pay salaries and rent through the end of September. Restaurants, salons and other recreational venues closed earlier this month as the country tightened restrictions to combat a second wave of the coronavirus.

“With the loan-deferral program extending further, businesses will have more time to improve cash flow before lenders assess the ability of customers to pay down deferred dues and it allows for more loan restructuring,” said Bloomberg Intelligence analyst Edmond Christou. Qatari banks have relatively low ratios of non-performing loans, but data on first-quarter earnings suggests they’ve edged higher, he added.

(Updates with closing share prices in third paragraph, adds comments and context in seventh and eighth.)

–With assistance from Walid Ahmed.