A dozen people have gone missing at sea off the US state of Louisiana after a commercial ship capsized in the Gulf of Mexico, sparking a rescue operation that saved six others.

The United States Coast Guard and a fleet of volunteers were deployed to search for the 18 crew on board after the vessel capsized in a storm near Port Fourchon, about 160km (100 miles) south of New Orleans, on Tuesday night.

The ship was a 39.3 meters (129 feet) lift vessel, commonly used to support drilling and construction, the coastguard said.

They told the newspaper the search for the remaining crew was continuing.

A picture posted on Twitter by the coastguard showed only a small portion of the vessel jutting out of the choppy waters.

The operation came as an unexpectedly strong storm hit the area, creating dangerous conditions for boats in the area.

The National Oceanic and Atmospheric Administration reported gusts up to 75mph (120kmph) on Louisiana’s southern coast, according to local media.

Eighteen people had been on board the vessel when it capsized, Seacor Marine, the transport company that owns the vessel, told The New York Times.

The incident comes more than a month before the start of the hurricane season in the region. Researchers expect this year to be more active than average. 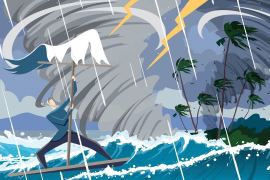 It is time to revolutionise how we talk about the weather

Over the past 50 years, the accuracy of cyclone forecasts has improved, but the way we communicate the risks has not. 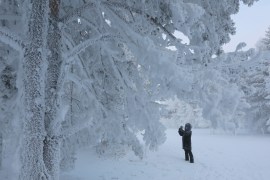 The Stream looks at how weather is communicated and asks what can be done to prepare people for extreme weather events. 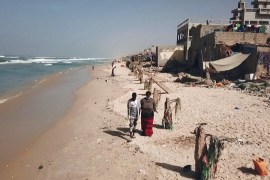