Istanbul, Turkey – The first visit of a high-profile Greek minister to Turkey in more than two years comes months after the countries stood on the verge of conflict in the eastern Mediterranean.

Foreign Minister Nikos Dendias will arrive in Ankara on Thursday for a meeting with his counterpart Mevlut Cavusoglu that aims, among other items on the agenda, to pave the way for a future summit between the neighbours’ leaders – Turkish President Recep Tayyip Erdogan and Greek Prime Minister Kyriakos Mitsotakis.

Accepting the invitation last month, Dendias said the talks would also seek common ground to resolve the “sole bilateral dispute” between the NATO allies. “In other words, the delimitation of the exclusive economic zone and continental shelf in the Aegean and the eastern Mediterranean.”

Tensions flared over the summer as Turkish research ships explored for oil and gas reserves in waters claimed by Greece and its close ally Cyprus.

The dispute led to a military standoff at sea as the two countries’ navies shadowed each other. At one point, a collision between Greek and Turkish warships heightened fears of unintended escalation.

Ankara’s relations with the European Union also suffered and Brussels raised the prospect of sanctions in response to Turkey’s “provocative actions” against EU members Greece and Cyprus.

Since then, Turkey has stood down its hydrocarbon survey work in contested waters and two rounds of talks between less senior officials over maritime disputes have been held in Istanbul and Athens – the first such negotiations since 2016.

Erdogan and Cavusoglu have also sought to repair bridges with the EU, hosting European Commission President Ursula von der Leyen and Charles Michel, president of the European Council, last week, although the visit was overshadowed by a sexism row about seating arrangements.

Signs of hostility between the neighbours, however, remain just below the surface.

In a tweet sent late Friday, Erdogan’s communications chief Fahrettin Altun posted a video accusing Greece of harbouring “terrorists” who have targeted Turkey, including Kurdish separatists and members of a group accused of organising a coup attempt in 2016.

Turkey has also accused the Greek coastguard of putting lives at risk by forcing migrants trying to reach the Greek islands back into Turkish waters. Meanwhile, Greece has claimed Turkey is facilitating such crossings in breach of a 2016 refugee deal between Ankara and the EU.

Although observers see the talks between Cavusoglu and Dendias as a significant development, they say there is little hope of a serious diplomatic breakthrough on the issues that separate the countries.

“The differences between Turkey and Greece are intricate and intractable,” said Eyup Ersoy, a faculty member at Ahi Evran University’s international relations department in Turkey.

“Therefore, under current conditions, an overall resolution of these differences is impractical. The prudent approach is to reach a mutually acceptable modus vivendi based on common interests.”

Ozgur Unluhisarcikli, director of the German Marshall Fund’s Ankara office, said the talks marked the start of normalisation between the countries.

“The best the two sides can agree on is de-escalation and nobody expects anything else,” he said. “Both countries have taken such maximalist positions that it will really be difficult to reconcile their positions but they can commit to de-escalation and continuing to talk and to not using the resources in the Mediterranean as an ongoing issue.”

Although neither side seems prepared to make significant concessions, both wish to end the disruption caused by their disagreements, according to Karol Wasilewski, head of the Middle East and Africa Programme at the Polish Institute of International Affairs.

“I am not that optimistic when it comes to the possibility of a permanent solution as it seems that currently, both sides are not yet ready for a compromise,” he said.

“On Turkey’s side, we have a deeply nationalistic government and a president who seems to regard the foundations of the republic – among them Treaty of Lausanne which regulates the Turkish-Greek border – as a factor limiting the further development of the ‘New Turkey’ in the 21st century.

“Greece, in turn, partly due to EU’s support and in part thanks to Turkey’s regional isolation, thinks it enjoys an upper hand and thus is unwilling to back down from its demands.”

The animosity between the two sides dates back centuries and is a central theme in the foundation of both states – Greece won independence from the Ottoman Empire in the 19th century while the defeat of Greek forces in western Anatolia marked the formation of modern Turkey after World War I.

The neighbours have come to the brink of war several times since the 1970s, including over the Turkish invasion of Cyprus in 1974 and maritime limits in the Aegean.

The 1923 Treaty of Lausanne left most of the islands lying off Turkey’s coast in Greek possession, heralding future arguments over sea boundaries.

Athens claims these islands – some just a group of rocks – determine its territorial waters, a definition Ankara says denies it fair access to the resources off its Aegean and Mediterranean coastline.

Another matter expected to be discussed at Thursday’s meeting is migration, with both sides keen to extend the 2016 agreement that saw the EU grant 6 billion euros to Turkey in return for stemming the flow of migrants to Europe.

They may also strive to limit military exercises in the Aegean and Mediterranean, which have often been the source of tension.

“Because others are watching, both sides will feel compelled to give positive messages and signals,” said Unluhisarcikli, referring to the EU and the United States. 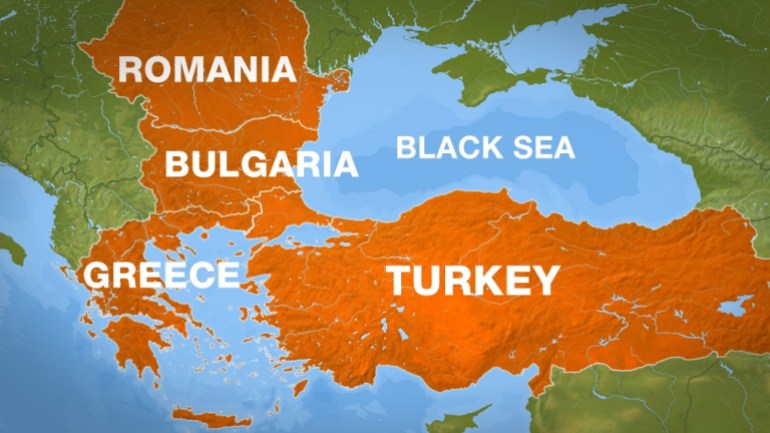 Thursday’s talks, which Cavusoglu said would continue at a future date in Athens, came after Turkey has sought to improve relations with others in the region, including Egypt, Israel and Saudi Arabia.

The eastern Mediterranean dispute over energy exploration has entangled other nations aside from Turkey, Greece and Cyprus.

A maritime deal with the Tripoli-based Libyan government in late 2019 was seen as an effort to counter plans for an underwater gas pipeline by Greece, Cyprus and Israel.

The agreement, which came as Turkey sent military support to defend Tripoli from attacks by rival forces, created an exclusive economic zone between the Turkish and Libyan coasts that ignored major Greek islands such as Crete and Rhodes.

Mitsotakis called the deal “illegal” and the following year Greece and Egypt signed a similar pact between themselves.

The Libyan conflict, which ended with a ceasefire in October and the formation of a national unity government last month, also drew countries that supported Tripoli’s rival eastern-based administration, such as Egypt, the United Arab Emirates and France, into the maritime energy dispute.

Erdogan hosted the head of Libya’s interim government in Ankara on Monday, when they recommitted to the 2019 deal. Dendias visited the eastern Libyan city of Benghazi on the same day, following a recent trip by Mitsotakis to Tripoli.

Greece has come to realise that its approach of excluding Turkey in the eastern Mediterranean is not feasible or sustainable, according to Ersoy, and it has failed to gain the support it had hoped to secure from other EU states.

‘As long as we’re talking’

Meanwhile, Turkey’s “engagement should be seen through the prism of a ‘pro-EU turn’ in its foreign policy”, Wasilewski said.

Despite the slim prospects for a “grand bargain” between the two, “talking is better than not talking… and that’s how we should look at it given the current state of affairs”, said Unluhisarcikli.

“As long as we’re talking and not deploying troops against each other, we can be happy.”

A future summit between Erdogan and Mitsotakis would provide a better chance of managing tensions, if not resolving their underlying problems, added Wasilewski.

“Of course, this is not a perfect solution, but the ugly truth is that politics is much more often the art of the possible and achievable than the art of making miracles.”