The Detroit Lions became the fourth National Football League team to opt out of in-person voluntary workouts, citing concerns over COVID-19, as a rift emerged between the league and its players’ union over off-season protocols.

The Lions joined the Denver Broncos, Seattle Seahawks and Tampa Bay Buccaneers, who said this week they would not participate in the workouts, a year after the NFL took its off-season to a “virtual” format up until training camp, as the deadly pandemic ripped through the United States.

Brazil is one of the world’s most important agricultural producers, but millions of people in Latin America’s biggest country are struggling to put food on the table as the COVID-19 outbreak wreaks havoc on the economy.

To combat growing hunger, a group called G-10 Favelas has begun distributing basic food parcels to slums in the city of Sao Paulo. By the end of this month, 30 thousand tonnes will have been delivered, it says.

German coronavirus infections appear to be on the rise once more, but a possible lack of testing over the Easter holiday week means the exact situation is unclear.

The number of new infections per 100,000 people over seven days rose to 153.2, similar to levels in January during the second wave of the pandemic, but still short of 197.6, the country’s record from December.

Argentine President Alberto Fernández was given his medical all clear on Wednesday after testing positive for COVID-19 earlier in April, though he never displayed more than mild symptoms and continued to work through a period of isolation.

Fernandez, 62, had received two doses of Russia’s Sputnik V vaccine for COVID-19 at the start of the year.

Prime Minister Alexander De Croo announced his intentions to end coronavirus-related restrictions at a news conference in Brussels following a seven-hour meeting with regional leaders who struggled to find a compromise.

“We saw that the number of infections has clearly decreased during the last weeks, we saw that the reproduction rate is under one, and we see that the hospitalisation rate starts to decrease too,” De Croo said at a news conference.

Tuesday’s number is higher than the seven-day average of 71,215. The country also reported 987 new deaths on the same day. With Tuesday’s deaths, the COVID death toll in the US increased to 563,446.

The pace of Moderna Inc’s COVID-19 vaccine production is unlikely to speed up markedly in the next few months, though the drugmaker expects its manufacturing capacity to expand significantly by 2022, Chief Executive Stephane Bancel said during a Wednesday investor call.
Moderna is still on track to deliver between 700 million and one billion doses in 2021, Bancel said. “Adding big chunks of capacity takes time,” he added.

Spain is prepared to begin distributing the Johnson & Johnson coronavirus vaccine as soon as the European Medicine Agency gives a favourable view on the shot, Health Minister Carolina Darias said.

The first batch of 300,000 doses of the vaccine, which has been suspended in the United States due to clotting concerns, arrived in Spain earlier on Wednesday but will remain in storage until the EMA announces new guidelines.

WHO worried coronavirus rates could spike during Ramadan

The World Health Organization expressed concern Wednesday that the COVID-19 pandemic could worsen in the Middle East and North Africa during the Muslim fasting month of Ramadan.

Detected cases of infection in the region rose 22 percent last week, while deaths rose 17 percent, said Ahmed al-Mandhari, the Cairo-based chief of the WHO for the eastern Mediterranean.

Mandhari said the situation in the region reflects a “worrying trend”.

The trip was originally set for January and heralded as an opportunity for the UK to refocus its international trade policy in the wake of Brexit as it pursues a so-called “global Britain” strategy.

But spiking coronavirus deaths at home caused the delay and now rising cases in India have led to Johnson shorten the three-day visit, which starts April 26.

Trinidad government to close beaches amid rise in cases

The government of Trinidad and Tobago says it is closing all beaches in the twin-island nation for three weeks to stem a rise in coronavirus cases.

Officials also say they are banning indoor dining at restaurants, bars and casinos. Only groups of five, instead of 10, will be allowed to gather in public. The measures take effect at midnight Thursday.

South Africa has suspended the Johnson & Johnson shot as a matter of pre-caution, a member of the Ministerial Advisory Committee on COVID-19 told Al Jazeera, shortly after the United States suspended the use of the vaccine due to fear of blood clots.

“In the South African setting where we have administered doses we haven’t seen this rare condition, but because this has been seen in the United States and they’re evaluating it now, it was thought wise that we just put a temporary halt,” Helen Rees said over Skype.

“We’ve been very cautious about safety and evaluating them. That’s good news that’s reassuring for the public.”

However, Rees said the constant starting and stopping of the vaccine rollout was “confusing for the public”.

Portugal’s parliament extended a state of emergency for 15 days as health experts warned that a gradual relaxation of strict lockdown rules now under way could soon lead to a significant jump in coronavirus cases.

The state of emergency grants the government powers to take emergency measures such as imposing a nighttime curfew if deemed necessary, though the general trend is currently to ease a lockdown imposed in January to curb what was then the world’s worst COVID-19 surge.

Canada will not restrict AstraZeneca vaccine

Canada’s health ministry said it would not restrict use of AstraZeneca’s COVID-19 vaccine after a review showed the benefits outweighed the very rare risk of blood clots.

A separate advisory council had earlier recommended Canada stop offering the vaccine to people under 55. The panel is now reviewing that advice, the health ministry said in a statement.

Top US infectious disease expert Dr Anthony Fauci reaffirmed that the COVID-19 shots authorised in the US are safe, after US regulators paused shipments of Johnson & Johnson’s shot amid reports it can cause blood clotting.

US Centers of Disease Control and Prevention Director Dr Rochelle Walensky urged Americans to keep their appointments for shots from Moderna and Pfizer as the US government works to boost availability of the other authorised shots to offset the pause on J&J dose shipments.

“I want to be clear that this announcement will not have a significant impact on our vaccination program.  The J&J vaccine makes up less than 5 percent of the more than 190 million recorded shots in the arms in the US to date,” White House COVID-19 response coordinator Jeff Zients said at a news briefing.

Yesterday's announcement will not significantly impact our vaccination program.

We have more than enough supply of the Pfizer and Moderna vaccines to keep our pace, hit our goal of 200 million shots in our first 100 days, and reach all adults who want to be vaccinated by May 31.

Italy reported 469 coronavirus-related deaths against 476 on Tuesday, the health ministry said, while the daily tally of new infections rose to 16,168 from 13,447.

Italy has registered 115,557 deaths linked to COVID-19 since its outbreak emerged in February last year, the second-highest toll in Europe after the United Kingdom and the seventh-highest in the world.

Malawi will destroy more than 16,000 expired coronavirus vaccines donated to the impoverished country by the African Union three weeks before their use-by-date, a health official said.

The southern African country received 102,000 doses of the Oxford/AstraZeneca jabs last month but 16,400 were not administered before they expired.

A further 38 people were reported as having died within 28 days of a positive test for COVID-19, meaning there were 234 deaths between April 8 and 14, an increase of 9.3 percent compared with the previous seven days.

The government of Switzerland announced it would significantly ease its COVID-19 restrictions despite acknowledging that the country’s virus situation “remains fragile and has even worsened in recent weeks”.

As of Monday, Swiss restaurants and bars, which have been closed since December, will be permitted to open outdoor seating areas, the government said.

Cinemas and other leisure facilities will reopen, as will outdoor and indoor sports facilities.

Finland said on Wednesday people aged under 65 who got a first dose of the AstraZeneca COVID-19 shot may get a different vaccine for their second dose, as authorities warned about delays to the country’s rollout.

The Institute of Health and Welfare said it was possible to give a second dose from another manufacturer to people aged under 65 who have already been given AstraZeneca and are scheduled to receive a second dose in the coming weeks.

It’s the third country after France and Germany to consider mixing vaccines as they limit the use of the AstraZeneca shot amid concerns about blood clots.

Russia says Sputnik V vaccine does not cause blood clots

The developer of Russia’s Sputnik V coronavirus vaccine said its jab did not cause blood clots, a potential side effect that has disrupted rollouts in several Western countries.

The United States has recommended pausing its rollout of the Johnson & Johnson vaccine after one person out of nearly seven million Americans died from a rare type of clot in the brain following inoculation.

Romania’s Prime Minister Florin Citu sacked his health minister in a move he said was in response to the country’s coronavirus epidemic, but which threatens the future of his governing coalition.

Deputy Prime Minister Dan Barna, who heads the centre-right USR-Plus that Voiculescu is a member of, said Citu had acted without consulting the party and should himself be replaced.

The head of the European Union’s executive arm has announced plans for a significant contract extension for COVID-19 vaccines with Pfizer stretching to 2023.

European Commission President Ursula von der Leyen said on Wednesday that the EU will start negotiating to buy 1.8 billion doses of the Pfizer vaccine through 2023.

Von der Leyen expressed full confidence in the technology used for the Pfizer vaccine, which is different from the technology behind the AstraZeneca vaccine.

India’s Maharashtra state will impose stricter restrictions for 15 days to stem the surge of coronavirus infections that is threatening to overcome hospitals.

Top Maharashtra officials stressed that the closure of most industries, businesses, public places and limits on the movement of people did not constitute a lockdown.

France to continue to give Johnson & Johnson vaccine to over-55s

France is sticking to its plan to give those aged 55 and above the Johnson & Johnson vaccine suspended in the United States and South Africa over rare blood clots, a government spokesman said.

Gabriel Attal also reaffirmed the government’s confidence in the AstraZeneca jab as an “essential tool” in the fight against COVID-19, hours after Denmark said it was stopping its use of the shot due to rare incidents of clots in people who received the vaccine.

Denmark halts use of AstraZeneca vaccine

Denmark is halting the use of AstraZeneca’s COVID-19 vaccine, the head of the Danish Health Administration has said, taking the country’s policy a step beyond other nations that have restricted the drug’s use only for certain age groups.

The vaccination campaign will continue without the shot from the British-Swedish company, Soren Brostrom said at a news conference in Copenhagen. 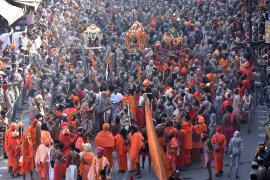 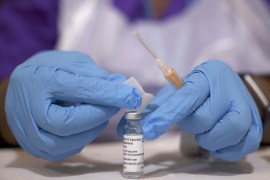 Researchers are exploring whether existing vaccines can be used ‘more flexibly’ in the fight against the pandemic. 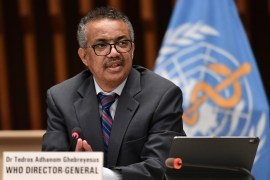 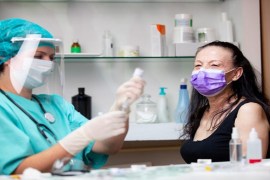