New Delhi, India –  A plan to demolish part of a 130-year-old library to construct a flyover is being widely slammed in India.

Authorities in the eastern Indian state of Bihar are contemplating razing the front part of the Khuda Bakhsh Oriental Public Library, located in the heart of the state capital, Patna.

The move has triggered outrage among academics and conservationists, with dozens of the city’s prominent intellectuals urging the state government to preserve the heritage structure.

The Bihar government’s bridge construction department wants to build a $50m 2.2km (1.3-mile) flyover in order to resolve traffic congestion in the state’s main city and has sought a no-objection certificate from the library.

To build the elevated road, the department says it will have to demolish the library’s Curzon Reading Room – built in 1905 and named after the British viceroy to India, Lord Curzon, who visited the institution in 1903 and gave it funds to expand.

In a letter to Chief Minister Nitish Kumar, the Indian National Trust for Art and Cultural Heritage (INTACH) asked the government to drop the proposed demolition, saying such a move would be a “monumental loss of heritage for not just Patna, but the entire world”.

The Bihar legislative assembly’s library committee, chaired by left-wing state legislator Sudama Prasad, has called a meeting of Patna civil society on Tuesday to seek the public’s opinion on the proposed demolition.

Prasad along with other legislators belonging to his Communist Party of India (Marxist-Leninist) visited the library on Saturday. He called the government’s proposal to demolish a part of the library “totally outrageous” and an “assault on our heritage”.

“On one hand, the Nitish Kumar government talks about preserving history and heritage of the state but on the other side they are planning to demolish one of the prominent heritage libraries,” Prasad told Al Jazeera.

“We will do everything in our power to stop this assault and save our heritage.”

Khuda Bakhsh Oriental Public Library’s Director Shayesta Bedar said the institution is “our collective heritage, our national pride, recognised by people all over the world”.

“It is our responsibility, including that of the government, to save this heritage,” she told Al Jazeera.

Bedar said the library has written to the state government, demanding a change in the flyover plan and giving various suggestions to better manage traffic without demolishing a historic building.

“The proposal will lead to the demolition of several historic buildings,” she said.

Patna’s district magistrate, Chandrashekhar Singh, said there is no plan to demolish the main two-story building of the library. He said it was the Curzon Reading Room, which is close to the library’s boundary wall, that would be in the way of the proposed project.

“Only five metres of Curzon Reading Room will be demolished and the administration has said it will first construct a new reading room on the same design in the library campus before demolishing the older one,” he told Al Jazeera.

However, INTACH’s Patna convener, JK Lall, expressed shock and surprise over the proposal.

“It is bizarre that the administration is saying it’s not demolishing the main building of the library, but only the front portion of the Curzon Reading Room. Curzon Reading Room is an important part and parcel of the Khuda Bakhsh Library,” he told Al Jazeera.

Imtiyaz Ahmad, former director of the library and a retired professor of history at Patna University, expressed his outrage over plans to demolish a part of Patna’s first-ever public library, which has been visited by scholars from around the world for more than a century.

“This library is of world heritage value. It has the largest collection of Islamic manuscripts in the country and other important books and documents as well,” Ahmad told Al Jazeera.

“We are all shocked with this proposal. This library happens to be the first public library in Patna, possibly in Bihar as well. How can the government think of destroying the state’s heritage?”

‘Eternal feast for the eye’

Situated on the banks of river Ganges, the Khuda Bakhsh Oriental Public Library, according to its website, opened to the public in October 1891. It was founded by Khuda Bakhsh Khan with 4,000 manuscripts, of which he inherited nearly 1,400 from his father, who was an avid collector of handwritten books.

Khuda Bakhsh Khan, a philanthropist and ardent bibliophile, was born in August 1842 in the state’s Siwan district. His ancestors were in the service of the Mughal dynasty, for which they did book-keeping and writing records of the empire.

Ahmad said the library’s building used to be Khuda Bakhsh’s residence, which he donated to the “people of Patna” along with his personal collection of manuscripts, written on paper, palm leaves, deer-skin, cloth and sundry materials.

Today, the library has about 21,000 original manuscripts and more than 250,000 printed books in Arabic, Persian, Urdu, English and Hindi languages, besides a few in German, French, Punjabi, Japanese and Russian.

One of its manuscripts, Tarikh-e Khandan-e Timuriya, is mentioned in the UNESCO Memory of the World Register and three more – Diwan-e Hafiz, Kitab al-Tasreef and Kitab al-Hashaish – have been identified as Vigyan Nidhi (Treasure of Knowledge) by India’s culture ministry.

The library was declared a site of “national importance” by the government of India in 1969 through an act of Parliament. Though an autonomous institution, the library is fully funded by the culture ministry.

“The books are works of art. The magnificent finish and the colouring about the decoration of Quran and Shahnama are an eternal feast for the eye,” Gandhi wrote after visiting the library in 1925.

“I revere the memory of the great founder who had spared no pains or money to present India with such a rare collection.”

Sheema Fatima, a researcher who has worked on Patna’s urban geography, said the Khuda Bakhsh Oriental Public Library “garnered attention because it is a library of international repute”. She also said this is not the first incident in Bihar where the government planned to demolish a historic building.

“This has been the obsession of [Chief Minister] Nitish Kumar for the last 10 years. He has broken many such historic buildings,” she told Al Jazeera. “The city needs to think about what they are aiming for.”

Fatima said even the federal government, led by the right-wing Bharatiya Janata Party (BJP) was “obsessed with making its own history”. “Rather than preserving the city’s history and heritage buildings, they are breaking it,” she said.

INTACH’s Lall said his organisation will file a case in court if the government approves the demolition.

“We have approached all the concerned authorities in the state regarding the issue and if the proposal is not revoked, we will have no other choice but to knock on the doors of the court.” 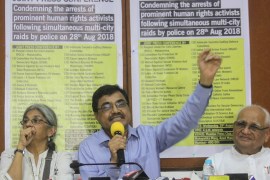 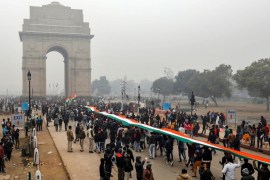 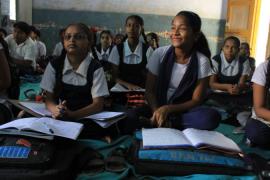 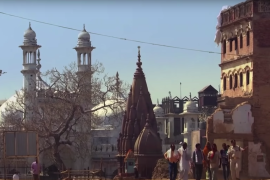 After Ayodhya, another mosque-temple dispute brews in India’s UP