Tehran, Iran – Iran condemned a blackout at its underground Natanz nuclear facility early on Sunday as an act of “nuclear terrorism” and said Tehran reserves the right to respond, but did not specify who was responsible and how Iran may react.

“The act against the Natanz nuclear enrichment centre shows the defeat of the opponents of the country’s industrial and political advancements in preventing the nuclear industry’s significant development,” Ali Akbar Salehi, the head of the Atomic Energy Organization of Iran (AEOI), said on Sunday.

Salehi also directly linked the incident with the nuclear deal, saying it was perpetrated by those who oppose nuclear negotiations to lift US sanctions.

“While condemning this desperate move, the Islamic Republic of Iran emphasises the need for a confrontation by the international bodies and the (International Atomic Energy Agency) against this nuclear terrorism,” he said.

Israel’s Kan public radio cited intelligence sources as saying that Israel’s Mossad spy agency had carried out a cyber attack at the site. Israel made no official comment on the incident.

Parts of the electrical grid at Iran’s main nuclear facilities at Natanz were compromised early on Sunday, in the latest incident to hit the site in Isfahan province, where locally developed centrifuges are reportedly assembled after it was hit by a large explosion last July.

AEOI spokesman Behrouz Kamalvandi told Fars news agency earlier on Sunday that there was no loss of life or environmental pollution as a result of the incident.

After the explosion last year, Iran said “sabotage is certain”, adding there were strong suspicions that “internal agents” played a role.

But the government, citing security concerns, refrained from disclosing additional information on Sunday.

Malek Shariati Niasar, a Tehran-based lawmaker who serves as spokesman for the Iranian parliament’s energy committee, wrote on Twitter the incident was “very suspicious”, raising concerns about possible “sabotage and infiltration”.

He added lawmakers were pursuing details of the incident as well.

A spokesman for the UN nuclear watchdog said: “We are aware of the media reports. We have no comment at this stage.”

On Saturday, a part of the centrifuge assembly and evaluation site at the Natanz facilities was displayed on national television as Iran unveiled 133 “achievements” to celebrate its nuclear technologies day.

The engineer who made the presentation at the site told President Hassan Rouhani the “terrorist move” to blow up parts of the facility last July did not stop its progress.

Kan Radio, citing the intelligence sources, said the damage at Natanz was more extensive than had been reported in Iran.

The development comes as Iran and world powers concluded on Friday the first week of “constructive” talks in Vienna to restore the country’s 2015 nuclear deal.

Natanz suffered a mysterious explosion at its advanced centrifuge assembly plant in July 2020 that authorities later described as sabotage. Iran now is rebuilding that facility deep inside a nearby mountain.

Israel, Iran’s regional archenemy, has been suspected of carrying out that attack as well as launching other assaults, as world powers now negotiate with Tehran in Vienna over its nuclear deal.

Iran also blamed Israel for the killing of a scientist who began the country’s military nuclear programme decades earlier.

The Stuxnet computer virus, discovered in 2010 and widely believed to be a joint US-Israeli creation, once disrupted and destroyed Iranian centrifuges at Natanz.

Israel has not claimed any of the attacks, though Prime Minister Benjamin Netanyahu repeatedly has described Iran as the major threat faced by his country in recent weeks.

Saudi columnists on Sunday voiced concern that Western nations were not taking a tough enough stance in indirect talks aimed at restoring the 2015 nuclear deal with Iran. Saudi Arabia opposes the deal because it does not address the wider regional behaviour of Iran, its arch enemy.

The talks in Vienna aim to bring the United States and Iran back into compliance with the pact after the Trump administration quit the deal in 2018 and reimposed sanctions on Tehran, which responded by breaching some nuclear restrictions.

“There is Gulf apprehension regarding the Vienna talks,” Tariq al-Humaid wrote in Saudi-owned Asharq al-Awsat newspaper.

“Iran is specifying its terms and the timing whereas all the West wants is a deal as soon as possible ahead of Iranian elections,” he said, referring to June presidential polls.

The United States and Iran both took a tough stance at the Vienna talks, in which European Union officials are shuttling between the remaining parties to the deal. Washington predicted an impasse if Tehran sticks to a demand that all sanctions since 2017 be removed.

“Iran is taking advantage of US and European complacency to stall and dodge,” Saudi columnist Faheem al-Hamid wrote in local newspaper Okaz.

Saudi Arabia, which has been locked in several proxy wars with Iran in the region and is concerned about Iran’s ballistic missiles, supported former US President Donald Trump’s campaign of maximum pressure on Tehran.

Riyadh and its allies have said Gulf Arab states should be included in any negotiations between President Joe Biden’s administration and Iran on a new nuclear deal.

A senior member of the Saudi royal family, Prince Turki al-Faisal, told a virtual forum hosted by Bahrain’s Al Bilad newspaper on Thursday he was concerned Washington would buckle.

“A return to the [nuclear] agreement will not resolve the danger … but could fuel conflict and push regional states to look at other options to maintain security and stability,” said Prince Turki, a former envoy to Washington who now heads the King Faisal Center for Research and Islamic Studies. 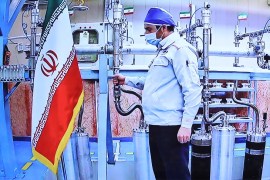 Iran says products from its cascades will have civilian uses, bashes Western powers for suggesting otherwise. 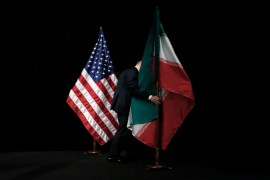 Can the US and Iran agree on reviving the 2015 nuclear deal?

The US and Iran hold indirect talks in Vienna aimed at salvaging the pact after Trump withdrew the US in 2018. 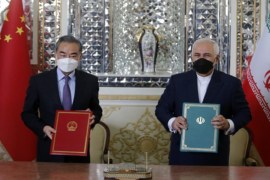 What is behind China and Iran’s ‘strategic’ deal?

The two countries have signed a long-term agreement worth billions of dollars.