Rio de Janeiro, Brazil – Almost a year ago to the day, the jungle city of Manaus grabbed international headlines after a flood of COVID-19 deaths forced gravediggers to dig mass burials – catapulting the city into the centre of Brazil’s coronavirus outbreak.

Those scenes are now being repeated throughout Brazil, where authorities are working day and night to bury the dead, with experts warning that the country’s funeral services could be the next to topple.

Since the start of the year, an uncontrollable second wave has pushed Brazil over the 300,000 death mark. As the country continues to hit grim milestones – a record 4,247 deaths on Thursday alone – the entire South American nation is now the global COVID-19 epicentre, with experts warning that 5,000 Brazilians could lose their lives in a single day in April.

Much of the fear is being directed to the P1 variant, linked to the Brazilian Amazon. If Brazil cannot control its high transmission rate, experts fear the country’s healthcare tragedy could endanger the world. If the virus is left to circulate freely, it could create the ideal breeding ground for new and even more deadly variants.

Brazil’s neighbours have sealed off their borders to the country in a desperate attempt to prevent new variants from bleeding into the rest of the continent and harming vaccine efficiency.

“We’re very concerned. The staggering amount of deaths in Brazil in just a few months is our biggest worry,” virologist and researcher Humberto Debat, from the National Institute of Agricultural Technology told Al Jazeera.

Brazilian President Jair Bolsonaro is increasingly being blamed for undermining the severity of the virus.

Even in the pandemic’s darkest hour, the far-right leader continues to ignore calls from health officials for a national lockdown, attacks the use of masks, ignores science, peddles unproven remedies and told Brazilians this week “there’s no use crying over spilled milk”, referring to Brazil’s soaring death toll.

“Unfortunately, we have a denialist president who refuses to follow science and encourages the public to follow,” said Ethel Maciel, a professor at the Federal University of São Paulo.

Experts have said a lack of social distancing measures has created the ideal environment for variants to mutate.

Since June 2020, Brazil’s infections and deaths marooned at a steady plateau of approximately 1,000 deaths a day, leading many to believe the worst was over. For months, Brazilians commuted on crammed public transport and packed its beaches, bars and nightclubs.

As Brazilians continued to flout containment measures, the P1 variant hatched, believed to have emerged in the Brazilian Amazon at the tail end of 2020. Weeks later, Manaus’ health system had all but collapsed.

According to the Fiocruz research institute, the P1 variant now accounts for more than 80 percent of cases in populous states, Rio de Janeiro and São Paulo. Three months ago, it was 0 percent.

Officials and experts are concerned about the speed with which the P1 variant, which is likely more infectious, is spreading and the damage it could pose globally.

“The virus has become ‘synchronised’ in the whole country, with intensive care units in several states at over 90 percent capacity,” said epidemiologist Daniel Villela from the Fiocruz branch in Rio de Janeiro.

Meanwhile, Brazil’s painfully slow vaccine rollout, the result of disorganisation and a lack of urgency from Bolsonaro is worrying. To date, fewer than 10 percent of Brazil’s 212 million people have been vaccinated.

“The only way out is accelerating our vaccine drive and national coordinated COVID protocols,” explained Villela.

But after Bolsonaro refused to implement a national lockdown on Wednesday, experts fear transmission rates will continue to skyrocket.

“The P1 variant is serious. Brazil could also spin out new, even more dangerous variants. The more people infected with the virus, the more mutations we’re going to see,” epidemiologist Eric Feigl-Ding, an adjunct senior fellow at the Federation of American Scientists, told Al Jazeera.

Despite promising news on Wednesday of preliminary results from a continuing study finding China’s Sinovac vaccine to be 50 percent effective against the P1 strain, experts have warned that the speed with which the virus is mutating could spell disaster for current vaccine campaigns.

“The 4,000 Brazilian deaths on Tuesday show that the virus is circulating in great quantities, mutating and evolving quickly. It’s trying to find a way to escape natural antibodies,” said Felipe Naveca, a virologist at Fiocruz Amazonas.

“It’s a nuclear reactor that has set off a chain reaction and is out of control,” Miguel Nicolelis, a Brazilian doctor and professor at Duke University in the US, told the Reuters news agency this week.

“We desperately need to stop it from spreading in Brazil and other countries with high transmission rates,” Naveca said.

‘How many more lives will we have to lose?’

Brazil’s crisis is now being felt well beyond its borders. The Pan-American Health Organization (PAHO) reported that the P1 variant has been found to be driving the second wave in at least 15 nations in the Americas.

Once championed as Latin America’s COVID poster child, Uruguay is now grappling with an explosive surge in deaths. According to government data, the 121 COVID deaths recorded in April has exceeded last year’s total COVID deaths.

“Uruguay is a good example of how things could get bad quickly,” said the Argentinian virologist Debat, who is monitoring the genome sequences of variants of concern.

The P1 variant has also been detected in Argentina, Paraguay, Colombia, Peru and Chile, as well as Canada and the United States.

Experts argue that sealing their borders will have little effect now variants of concern have entered.

“It’s too late to keep the P1 out. But it’s also too late to build immunity to the second wave. Only 40 percent of Argentinians over 70 have received their first dose. Still, we’re doing anything to delay it,” Debat explained.

“How many lives will we have to lose before we control it?” 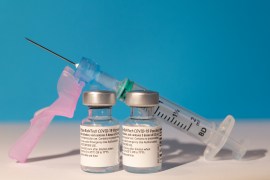 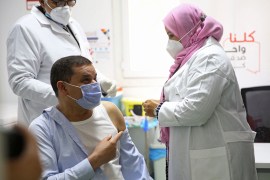 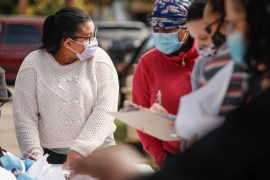 Community leader credits drop in coronavirus vaccine hesitancy among Black people in US to effective outreach.