Tehran, Iran – Iran began feeding gas to cascades of new, advanced centrifuges and unveiled dozens of “achievements” to mark its national nuclear technology day in an effort to show its nuclear programme is peaceful.

President Hassan Rouhani on Saturday launched several projects across the country via video link in Tehran that was broadcast live on national television, and an exhibition of 133 technological innovations with civilian and medical uses was also unveiled.

The display comes after the opening week of negotiations in Vienna, Austria, to restore the Joint Comprehensive Plan of Action (JCPOA) – Iran’s 2015 nuclear deal with world powers – ended on Friday on a hopeful note, and is slated to continue from Wednesday. 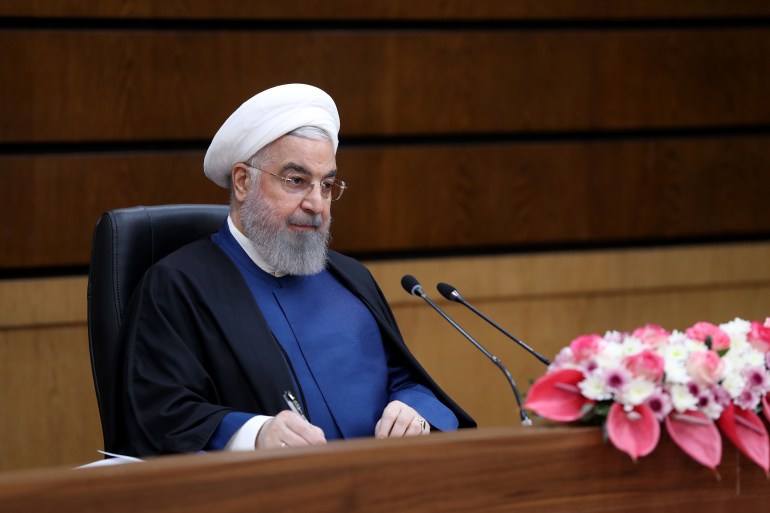 In Isfahan’s Natanz, where Iran’s largest nuclear facilities are located, the order was given to feed gas to 164 all-Iranian IR6 centrifuges, with 10 SWU – separative work units that indicate the amount of separation done by an enrichment process.

The IR6 was also deemed the most sustainably efficient centrifuge Iran currently deploys, which is slated to be mass-produced on an industrial level.

It was said to be able to produce 10 times more uranium hexafluoride (UF6) than IR1, Iran’s first-generation centrifuges.

“We can industrialise these machines without any reliance outside the country,” the engineer who answered Rouhani’s questions said.

Rouhani also gave the order to begin feeding gas to test a number of 30 IR5 centrifuges and 30 IR6s centrifuges, numbers that could grow if they are successful.

Moreover, mechanical tests began on the top-of-the-line IR9 centrifuge that has a separative capacity of 50 SWU.

Also in Natanz, a unit to assemble and evaluate advanced centrifuges was launched, where the presenting engineer said more than half of all operations are currently industrialised.

The “terrorist move” to blow up parts of the nuclear facilities in Natanz last year in an attack Israel has been suspected of orchestrating did not stop the progress, the engineer said.

In Arak, the second phase of industrial production of deuterium compounds at the Arak Heavy Water Reactor Facility was launched by the president, who also oversaw the launch of a first-of-its-kind emergency unit aimed at treating radiation burns.

A series of achievements were introduced at the National Centre for Laser Science and Technology in the Alborz province, while the president next discussed advances at a national centre to research stable isotope separation.

After the new projects were launched, the president delivered a televised address in which he once more emphasised Iran does not seek nuclear weapons, and railed against Western powers for acting based on the presumption that it did.

“These ill-placed concerns have created many problems for our people in the past 15 years,” Rouhani said, referring to multilateral sanctions imposed on Iran prior to its nuclear deal that provided sanctions relief for curbs on Iran’s nuclear programme.

Western intelligence maintains that Iran sought to weaponise its nuclear programme, plans that it abandoned in 2003.

Israel still repeatedly claims Iran is after nuclear weapons despite thorough inspections of its nuclear sites by the International Atomic Energy Agency (IAEA).

Rouhani also harshly criticised world powers and the IAEA for their lack of assistance in developing Iran’s peaceful nuclear programme.

“We don’t owe them, they owe us,” the president said, adding they should have assisted Iran as part of commitments under the Non-Proliferation Treaty.

The IAEA reportedly said in its report that Iran aims to produce molybdenum, which has many civilian uses, including in medical imaging.

As part of the nuclear deal, Iran’s enrichment of uranium was capped at 3.67 percent, a limit that it started gradually scaling back in 2019, one year after then-United States President Donald Trump unilaterally abandoned the nuclear deal and reimposed harsh sanctions on Iran.