The economic fallout from the coronavirus pandemic has worsened poverty in Argentina, with some 12 million people in urban areas unable to afford a basket of basic food or essential services in the second half of 2020, official data showed on Wednesday.

In the 31 large cities that were studied, the country’s poverty rate rose from 40.9 percent in the first half of the year to 42 percent in the second, according to the National Institute of Statistics.

This represented a steep climb of 6.5 percentage points from the last six months of 2019.

Poverty is defined as the inability to afford a basket of basic food and services valued at some $600 a month for a family of four.

People who cannot afford a basic basket of only food – about $250 for a family – are classified as indigent. They numbered 10.5 percent of the population in 2020.

More than 57 percent of children up to age 14 lived in poverty, the data showed.

The figures come on the back of three years of recession, worsened by economically devastating lockdown measures taken to quell the global health crisis.

Argentina registered its highest poverty rate of 58 percent at the end of 2002, during its worst economic crisis.

Separately, as the government continues fighting the pandemic, the administration of centre-left President Alberto Fernandez is also scrambling to renegotiate the roughly $45bn the country owes to the International Monetary Fund.

The coronavirus crisis has ravaged the top grains producer’s already ailing economy, complicating efforts to make good on its obligations.

Argentina also faces the maturity of $2.4bn in debt it owes to the Paris Club group of creditor nations, a payment it hopes to reschedule as reserves have plunged along with output.

The COVID-19 pandemic has killed some 55,000 people in Argentina out of more than 2.3 million recorded infections. 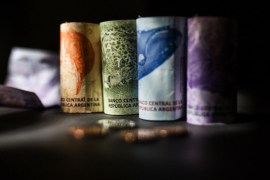 Economic recovery in Argentina and throughout Latin America is under threat from a fresh rise in COVID-19 cases. 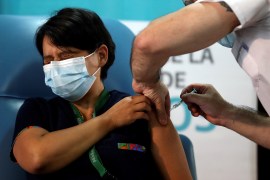 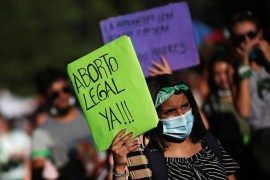 Argentina on the cusp of historic vote to legalise abortion

Senate debates bill that could make Argentina the largest country in Latin America to legalise abortion.