By
Aakash Hassan and
Zafar Aafaq

New Delhi, India – Indian authorities have detained more than 160 Rohingya in the Jammu area of Indian-administered Kashmir, with members of the persecuted minority saying the move was a “repeat of what happened with them in Myanmar”.

The detentions in Jammu began on Saturday after the region’s administration ordered the police to identify “illegal” Rohingya living in the city’s slums.

Approximately 5,000 mainly Muslim Rohingya had taken refuge in Jammu in the past few years after a large number of the ethnic group fled a deadly military crackdown in 2017 in Myanmar, their Buddhist-majority homeland.

India hosts about 40,000 Rohingya refugees living in camps and slums in different cities and regions, including Jammu, Hyderabad, Nuh and the capital New Delhi – many of them believed to be undocumented.

The detained Rohingya were taken to the Hiranagar jail, 59km (36 miles) from Jammu, which was turned into a “holding centre” for the detainees.

Officials said they would be deported to Myanmar, a country in turmoil as security forces crack down, killing more than 50 people to quell protests over a February 1 coup by the military.

“After nationality verification of these illegal immigrants, details will be sent to the ministry of external affairs in Delhi to be taken up with Myanmar for their deportation,” a senior police officer said, according to Indian media reports.

Shockwaves among the community

Saturday’s detentions in Jammu have shocked the community.

Mohammad Ibrahim, a Rohingya living in Jammu’s Narwal area, said a large police team arrived in their camp on Saturday morning and asked the community leaders to send refugees, in groups, to a nearby sports stadium for a “general verification” process and COVID-19 tests.

He said more than 300 Rohingya queued in the stadium, where they were subjected to coronavirus tests and biometric scans after they showed the identity cards issued to them by the UN refugee agency, UNHCR.

“They were given a slice of bread each and asked to wait,” Ibrahim told Al Jazeera.

“The gates of the stadium were shut and no one was allowed to leave,” he said. “In the afternoon, officials announced the names of some refugees and asked them to separate from the rest. Then they were whisked away in buses.”

Unnamed officials quoted in multiple local news reports said the refugees were detained for not having the required documents, adding that a process to deport them has been initiated.

The Rohingya said the police raided their camps again later on Saturday evening and started putting more refugees into buses.

“We don’t know why the authorities took them to jail,” said Abdul Rohin, whose 26-year-old son and daughter-in-law were among those detained.

‘We are not at peace here’

Last month, the Jammu and Kashmir High Court asked the local government to explain the measures taken to identify and deport refugees staying in Jammu within a month.

Rohingya community leaders and activists in India are appalled by the move and fear that this is a sign of hostility from the Hindu nationalist government towards the Rohingya.

“Rohingya refugees are innocent people who have committed no crime and yet they are being put in jail,” said Sabbr Kyaw Min, who heads a New Delhi-based Rohingya rights group.

“If the authorities are planning to deport us, then they should deport all of us together. And where will they deport? The situation in Myanmar has worsened after the army coup. It is hell there.”

Min said the Rohingya should be allowed to live in India until the situation in Myanmar improves. “We should be treated at par with other refugees,” he said.

A UNHCR official in India, who did not want to be named, said they are following up on this issue but have not been able to reach out to the authorities.

Nair said a petition he filed against the deportation of Rohingya is pending in India’s Supreme Court. “I need affidavits from them so that we will move the Supreme Court to stop detention and to free all those already in prison,” he said.

“They are not illegal migrants. They are refugees with valid UNHCR cards and, according to the memorandum of understanding between India and the UN refugee body, all urban refugees can be recognised as legal and these are urban refugees in Jammu,” Nair added.

In recent months, Indian police have detained dozens of Rohingya for allegedly not carrying valid documents. Activists say there are more than 300 Rohingya held in different Indian jails without trial for years.

“If the Indian government is planning to deport us then why are these refugees lying in jails for years? They should deport them first,” said Min.

Meanwhile, the refugees in Jammu’s camps continue to live in fear. “They can come anytime and take us away,” said Salah. “This is a repeat of what happened with us in Myanmar.”

He said they had decided to pack their bags and flee the camp, but the police stopped them and pushed them back.

“Our family members have been separated from us,” said a refugee, carrying a sack of clothes on his head. “We will march to Myanmar on foot. We are not at peace here.” 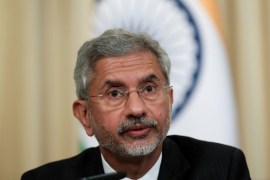 Visit comes amid efforts to resolve the fate of 81 Rohingya refugees adrift in international waters for two weeks. 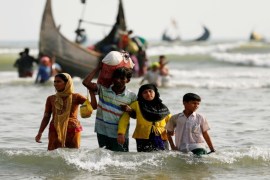 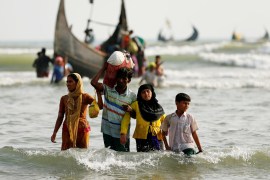 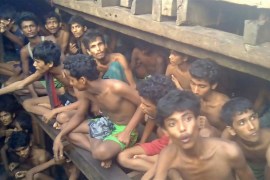