Two protesters have been killed by gunshot wounds to the head as Myanmar’s biggest trade unions began a nationwide strike in the latest attempt to pressure the country’s generals to step down after they seized power in a coup last month.

Photos posted on Facebook on Monday showed the bodies of two men lying on the street in the northern town of Myitkyina.

Witnesses said they were taking part in a protest when police fired stun grenades and tear gas. Several people were then hit by gunfire from buildings nearby.

One witness, who said he helped move the bodies, told Reuters news agency two people were shot in the head and died on the spot. Three people were wounded.

“How inhumane to kill unarmed civilians,” said the witness, a 20-year-old man. “We must have our right to protest peacefully.”

The killings came as shops, factories and banks in the main city of Yangon closed, responding to a call by 18 labour organisations that urged workers, “union and non-union alike”, to stop work to reverse the February 1 coup and restore Aung San Suu Kyi’s elected government to power.

“The time to take action in defence of our democracy is now,” said the unions, which represent industries including construction, agriculture and manufacturing.

“No one can force any Myanmar citizen to work. We are not slaves to the military junta now and we never shall be.” They added that the nationwide stoppage would continue until “we receive our democracy back”.

Witnesses reported the sound of gunfire and stun grenades in different parts of Yangon during the night.

Soldiers were also deployed to public buildings around the country, sparking confrontations with protesters, the Myanmar Now news agency reported. State media said on Monday that security forces were maintaining a presence at hospitals and universities across the country, as part of their law enforcement efforts.

Physicians for Human Rights said it was appalled by these moves, calling them a violation of international law.

“One eyewitness account detailed armed security forces entering and seeking to occupy West Yangon General Hospital by force,” the group said, adding it had reliable information that five other Yangon hospitals were being similarly occupied elsewhere in Myanmar. “Even though medical personnel vacated their government posts to initiate the civil disobedience movement, many returned to government hospitals in response to escalating violence against peaceful protesters.”

At least 50 people have been killed since the demonstrations began, according to the United Nations.

Women’s groups called for a htamein (sarong) movement to mobilise in force and mark International Women’s Day while condemning the generals.

Our htamein, our flag, our victory.

While we fight for democracy, we’re gonna fight against misogyny too. #WhatsHappeningInMyanmar #InternationalWomensDay pic.twitter.com/a9mntBBDAX

Protest leader Maung Saungkha on Facebook urged women to come out strongly against the coup on Monday, while Nay Chi, one of the organisers of the sarong movement, described the women as “revolutionaries”.

“Our people are unarmed but wise. They try to rule with fear, but we will fight that fear,” she told the Reuters news agency.

At least three protests were held in Yangon on Sunday, despite raids on campaign leaders and opposition activists by security forces late on Saturday.

Ba Myo Thein, a deposed legislator, said reports of bruising to Khin Maung Latt’s head and body raised suspicions that he had been “tortured severely”.

Police in Pabedan, Yangon, where Khin Maung Latt was arrested, declined to comment. A spokesman for the military did not answer calls seeking comment.

The army has said it is dealing with the protests lawfully. In a statement on Monday, the military said it had arrested 41 people the previous day.

An announcement by the military carried on the front page of the state-run Global New Light of Myanmar newspaper on Monday threatened unspecified “action” against anyone who directly or indirectly works for a committee of deposed legislators that has declared itself the country’s legitimate authority.

The announcement said the committee was illegal and had committed “high treason”.

The killings have drawn anger among the governments of liberal democracies, and the United States and others have tightened sanctions on the generals.

Australia on Monday said it was ending cooperation with the Myanmar military as a result of the increased violence and death toll. Campaigners had been urging it to do so since the brutal crackdown on the Rohingya in 2017, which was led by military chief Min Aung Hlaing, the coup leader.

Myanmar’s giant neighbour China on Sunday said it was prepared to engage with “all parties” to ease the crisis and was not taking sides.

The Assistance Association for Political Prisoners, which is tracking arrests since the coup, says 1,790 people had been detained as of March 7. A total of 1,472 remain in custody. 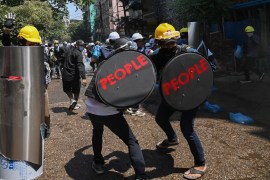 Australia was among 13 countries said to have been providing assistance to military that mounted a coup last month. 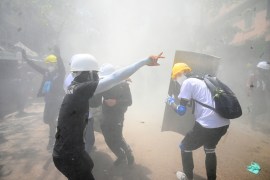 Protesters back on the streets following overnight raids in parts of Yangon that targeted NLD figures. 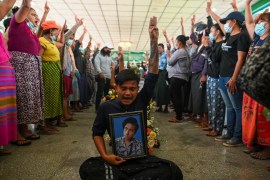 Protester fatally shot in the neck in Mandalay and an NLD official was stabbed and killed by pro-military mob in Magway. 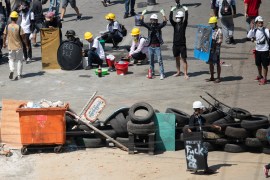 An executive order from US President Joe Biden gave the green light to block the transfer indefinitely, Reuters reports.