More than a dozen people have been killed and hundreds wounded in a series of powerful explosions at a military base in Equatorial Guinea’s largest city of Bata, according to officials.

In a statement on national television, President Teodoro Obiang said the blasts on Sunday were caused by negligence of a military unit “in charge of storing explosives, dynamite and ammunition at the Nkoa Ntoma military camp”.

Obiang, who has ruled Equatorial Guinea since 1979, said the explosives caught fire due to “stubble-burning by farmers in their fields” and that the blasts caused damage in almost all the houses and buildings in Bata.

The defence ministry said at least 20 people were killed and some 600 people injured. 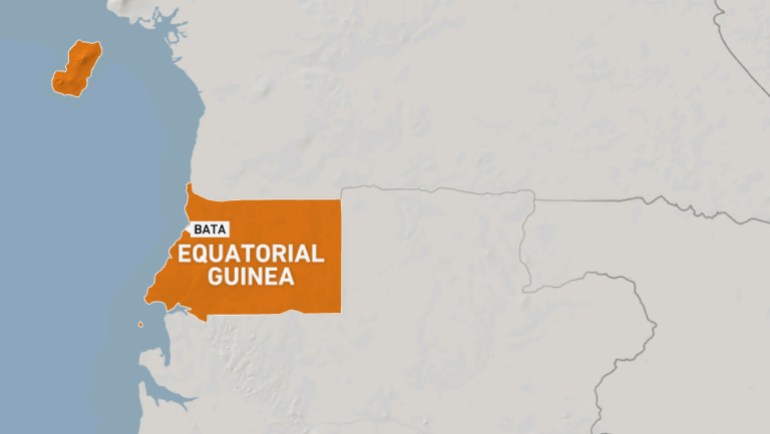 Local television showed groups of people pulling bodies from piles of rubble, some of which were carried away wrapped in bedsheets. There were also media appeals for people to donate blood, saying hospitals are overwhelmed.

Pick-up trucks filled with survivors, many of whom were children, drove up to the front of a local hospital where some victims were filmed lying on the floor.

In the blast area, iron roofs were ripped off half-destroyed houses and lay twisted amid the rubble. Only a wall or two remained of most houses. People ran in all directions, many of them screaming.

“We hear the explosion and we see the smoke, but we don’t know what’s going on,” a local resident named Teodoro Nguema told the AFP news agency by telephone.

Equatorial Guinea is a small country of some 1.4 million, with the majority of the population living in poverty despite rich oil reserves.

Obiang Nguema issued a plea for international aid, saying that the disaster comes at an already difficult time for Equatorial Guinea, “due to the economic crisis caused by falling petrol prices, and the COVID-19 pandemic”.

Obiang’s son, Teodoro Nguema Obiang Mangue, vice president with responsibility for defence and security, appeared in the television footage at the scene inspecting the damage, accompanied by his Israeli bodyguards, according to AFP.

Teodorin, as he is known, is increasingly seen as the designated successor of the 78-year-old president.

Translation: Following the explosions that occurred today in the city of Bata, Spanish nationals are recommended to remain at home, the embassy said.

After the blast, the Spanish embassy in the capital, Malabo, requested its nationals to remain at home. “Following developments in Equatorial Guinea with concern after the explosions in the city of Bata,” said Spanish Foreign Minister Arancha Gonzalez Laya on Twitter.

Separately, the French ambassador in Equatorial Guinea, Brochenin Olivier, expressed his “condolences for the catastrophe that has just occurred in Bata”.

William Lawrence, a former US diplomat and regional security officer in West Africa, called the incident “highly shocking” and said Equatorial Guinea was not ready for a disaster of this scale.

“This is going to have quite a devastating effect on many levels,” he told Al Jazeera. “Equatorial Guinea is one of the richest countries in Africa, with the least distribution of its oil wealth. There has been many coup attempts since independence and so this is going to rock the boat.”

In the short term, the country’s leader will have to account for what happened, said Lawrence.

“I don’t think there’s a lot of disaster preparedness training on this scale, and I suspect a lot of what’s going on today is winging it and already the country’s health services are hit quite hard by COVID-19, so this will be an added burden,” he added.

“There’s been frantic calls for blood donations and we have pictures of people lying on hospital floors not getting treatment.”