The vote on Saturday is the first test for Ouattara since last year’s turbulent presidential election that saw him re-elected with a landslide and was marred by deadly violence.

It is the first election that Gbagbo’s faction will contest since 2011, when the former leader was sent to The Hague to stand trial on charges of crimes against humanity over a wave of violence that followed the 2010 election. The violence, sparked by his refusal to concede defeat to Ouattara, led to about 3,000 deaths. Gbagbo was acquitted in 2019.

“We believe this is the time for us to return to the political scene, and for the opposition to return to power,” said Michel Gbagbo, Laurent Gbagbo’s 50-year old son, during a rally in Abidjan’s Yopougon neighbourhood on Thursday.

The parties are vying for power in West Africa’s biggest economy and world’s top cocoa producer. Under Ouattara, a 79-year-old former central banker and senior International Monetary Fund official, Ivory Coast has seen an economic growth average of more than 8 percent in the past 10 years.

Chic shopping centres have popped up across the country’s largest city and economic hub, Abidjan, and investment has poured into infrastructure and agriculture. Last year, the economy avoided a recession despite a night-time curfew and restrictions on travel and businesses to contain the coronavirus pandemic.

A faction of the FPI loyal to Gbagbo and Bedie’s PDCI, hoping to unseat Ouattara’s RHDP in several constituencies, are running with a joint list of candidates.

Michel Gbagbo, who is running in the populous Yopougon, traditionally an FPI stronghold, said he hoped for a high voter turnout, echoing a call by the 86-year-old Bedie. The former president last week took to Facebook to urge party supporters to vote massively.

“I believe this is the time for the opposition to retake the majority in parliament and also restore some faith in the electoral process,” said Yasmina Ouegnin, a candidate for the PDCI party in Abidjan’s Cocody neighborhood.

Ivory Coast is still recovering from the short civil war that led to Ouattara’s 2010 election victory. His latest election win was preceded by clashes between political supporters and security forces. At least 85 people died in the violence surrounding the vote, with the opposition accusing Ouattara of defying presidential term limits.

Campaigning for the legislative elections has mostly been smooth. Residents have gathered at rallies on dusty football pitches to see candidates hand out T-shirts, and sometimes cash, while reminding voters of their achievements. Still, some voters said last year’s tense presidential poll had raised their concerns ahead of the vote.

“This political bickering isn’t good for Ivory Coast,” Brigitte Koffi, a vendor outside an election rally in Abidjan, said above blaring zouglou, Ivorian  stylemusic. “We don’t want violence. On Saturday, I’ll vote for my candidate and for peace and stability.”

The March 6 poll will be more representative of the political landscape in Ivory Coast than any election since the 2010 post-election crisis, according to Tochi Eni-Kalu, an Africa analyst with the Washington-based Eurasia Group.

“These elections are less about cementing the majority’s power than about demonstrating Ouattara’s commitment to de-escalating political tensions given ongoing talks with the opposition,” Eni-Kalu said.

It will allow the parties to see where “they stand” and also be an important step for continued dialogue, said Kobenan Kouassi Adjoumani, a governing party spokesman.

“This time around the opposition understood it’s important they take part. We welcome their participation in peaceful elections,” Adjoumani said.

The challenge now will be to ensure that the election results are seen as credible by all actors, said William Assanvo, an Abidjan-based analyst with the Institute for Security Studies.

“It’s a return to a less disrupted political scene compared to previous elections. With all parties participating for the first time since 2011 this vote is a real test in terms of credibility for the electoral commission to organise the vote, for the participating parties and for the voters” as the country moves forward. 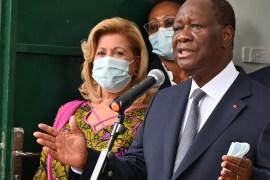 Election commission says Alassane Ouattara, 78, garnered 94 percent of the votes amid opposition boycott of the polls. 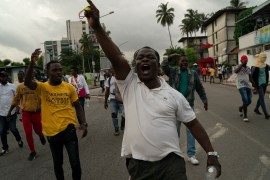 Tensions are high in Ivory Coast after President Alassane Ouattara was re-elected for a disputed third term. 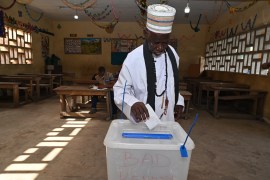 At least 30 killed in violence ahead of polls as President Ouattara seeks a third term in office.