It was Mursal Wahidi’s dream job, landed right after finishing her studies in journalism – working at a local TV station in her home city in eastern Afghanistan.

This week, the 21-year-old left the office for the day and walked home. She only made it a few steps. A gunman shot her point-blank in the head and chest. She died instantly.

At about the same time, two of her co-workers, 21-year-old Sadia Sadat and 20-year-old Shahnaz Raufi, left work together, jumping into an auto-rickshaw.

When they got out close to their homes, gunmen in another rickshaw that had been following them opened fire, killing both women and wounding two passers-by.

Afghan judges, lawyers and activists have also been singled out in a wave of assassinations since the United States signed a peace deal with the Taliban a year ago.

The killings have escalated since peace talks between the Afghan government and the Taliban began in Qatar last year, though the negotiations have stalled.

On Wednesday, funerals were held for the three women, who worked for Enikass Radio and TV in the city of Jalalabad. They dubbed popular and often melodramatic dramas from Turkey and India into Afghanistan’s local languages of Dari and Pashtu.

Friends and family gathered at the funerals in Jalalabad, where men took turns digging fresh graves with a shovel as others pleaded for an end to the deaths.

Rohan Sadat described his sister Sadia as “shy but active” who was also passionate about fighting for women’s rights and had planned to attend university and study law.

“We have buried her with all her hopes here,” Sadat told the AFP news agency.

Another colleague at Enikass TV who spoke on condition of anonymity said the station was reeling from the murders, saying the three victims were like “family”.

“Three innocent girls were shot dead in the daylight in the middle of the city. Nobody is safe any more,” said the colleague.

In December, Malala Maiwand, another female employee working for Enikass TV, was murdered in Jalalabad in similar circumstances.

Wahidi’s father said he had implored her to quit her job after Maiwand’s killing but she refused, as she loved her work fiercely.

“Journalism was her life’s dream, she studied and was living her dream,” Wahidullah Khogyani told The Associated Press (AP) news agency. He said he did not think that she had received any threats – but if she did, “she was hiding it”.

Afghan officials claimed they arrested the killer of the three, identifying him as Qari Baser and insisting he was a Taliban. Police did not explain how the man could have carried out two near-simultaneous attacks so far apart.

The coordinated killings of the three women were the latest in a bloody campaign against journalists in Afghanistan, a country that was already considered one of the most dangerous places in the world to be a journalist.

In just the last six months, 15 journalists and media workers have been killed in a series of planned killings.

The killings have spread fear among Afghanistan’s journalist community, prompting some to stop working or flee or self-censor to avoid angering the armed fighters or government officials, who have threatened journalists reporting on killings of civilians by government forces.

The fear is even worse because the perpetrators remain mysterious, a sign of the country’s fracturing security situation even as peace negotiations try to gain a foothold.

Zabiullah Doorandish, who works for a local TV channel in Kabul, said the false information flying around, including from the government, only fuels speculation. Some “start to think maybe there are groups inside the government that are targeting media,” he said.

Doorandish, who often covers corruption, violence and human rights violations, was hit by a roadside bomb attack in May. He survived, but two colleagues were killed. Now he is afraid every time he steps out of the house, he said.

He said he gets death threats, some claiming to be from the Taliban, but others unknown. The threats, he said, prompted him to put aside for now a documentary he was preparing about the killings of journalists.

“Whenever I cover some incident, an explosion or attack, I am filled with fear and panic,” said Doorandish, a father of two.

Afghanistan has more than 2,000 officially registered media outlets and attacks against the media have been countrywide. Last month in northern Afghanistan, the former head of a journalist association was killed and in western Ghor province, a journalist and his family were killed.

Earlier this year, an angry mob ransacked Radio Zohra, a local radio station in northern Afghanistan, after ab imam incited the attackers, claiming the station’s music interfered with prayers at the mosque. The station’s equipment was damaged and it had to halt its broadcasting.

One female TV presenter told the AP she fled her home after receiving death threats by phone from a person claiming to be from the Taliban.

Taliban spokesman Zabihullah Mujahid said the caller had no connection to the group and the Taliban had no issue with the work she was doing.

“As a mother, I get depressed thinking about my children’s future. What will happen to them if something happens to me?” said the presenter. She spoke on the condition she not be named or her hometown or current location identified to protect her security.

She also criticised the government, saying her pleas for help have gone unanswered. They just tell her to be careful.

“The government doesn’t do anything about these targeted killings,” she said. “They don’t care.”

Mohammad Naweed, a journalist who is now in hiding, said no side can be trusted. “All sides in the war are seeking their own interests.”

Latif Mahmood, the director of the government media and information centre, said the government is working for the safety of journalists and media workers and insisted officials provide accurate information. He blamed the Taliban for most of the attacks.

“Our investigations show that armed opponents of the government are behind the target killings, we have identified them, suspects are arrested, and they have confessed, their base and aim are totally clear,” he said.

The head of the Afghan Journalists Safety Committee, Najeeb Sharifi, said he expected killings to continue until a final peace agreement is reached.

“The targeted killing of journalists is very much linked to the larger political landscape in Afghanistan.”

The ISIL (ISIS) group has claimed responsibility for some of the attacks, including Tuesday’s slaying of the three women journalists.

Hours after the killings, the ISIL said it killed the women because they worked for one of the “media stations loyal to the apostate Afghan government”.

But many other attacks have gone unclaimed. The government blames most on the Taliban, trying to undermine the group’s support among the Afghans.

Taliban spokesman Mujahid denied it had any role in the killings of the three women. The group blamed the government for the slayings, saying it wants to undermine the peace process. 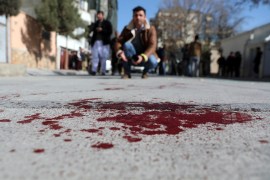 Young women gunned down in two separate attacks after leaving their television station. 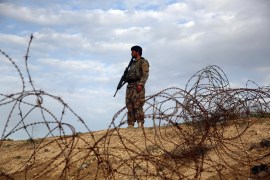 Afghans in shock after killing of female media workers

Outrage across the country as funerals held for the young women gunned down in Jalalabad on Tuesday. 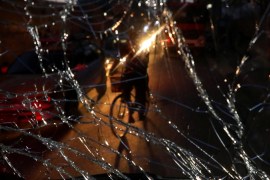 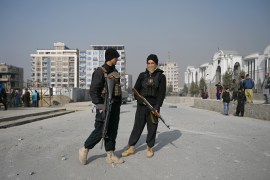