In a grim development, the government of Mexico said over the weekend that the true numbers of COVID-19 deaths are much higher than the official figures, offering significant insight into the effect of the pandemic on the Latin American nation.

The ministry of health said on Saturday that 294,287 people had died from the coronavirus pandemic in Mexico through February 14, an increase of 60 percent from the previously recorded number of deaths. As of Monday, 27,538 more deaths were registered, bringing the total number of COVID-19 related deaths to more than 321,000.

Johns Hopkins University’s COVID tracker, which Al Jazeera uses as its official count, showed Mexico’s death toll at 201,832 on Tuesday. But if the new Mexican government numbers are eventually reflected in the Johns Hopkins count, it would put Mexico just ahead of Brazil (313,866) in global deaths, behind the world fatality leader, the United States (550,371), two countries with much larger populations.

Luis Omar Monarrez Luna, a doctor who has been exclusively treating COVID patients for more than a year in a hospital in the city of Ciudad Juarez said the revised numbers did not come as a surprise. “From the very beginning, we could see that the numbers [of deaths] weren’t being reflected correctly in the official count,” Monarrez tells Al Jazeera.

“We would see on a given day that 10 people were [officially] reported dead, while in my hospital alone, 15 would have died,” he said.

Monarrez said his speciality is physical therapy but amid overwhelming numbers of COVID patients last year, the entire hospital and all the staff were deployed to treating only COVID patients. He has been working in the hospital’s emergency room where, during peak months, the hospital was so overrun he had to treat gravely ill patients on chairs in the waiting room.

Monarrez says amid limited hospital capacity, many patients with moderate COVID symptoms were being sent home, without being tested. Many would later become severely ill and die at home.

Many other patients in the hospital died before the return of positive test results. Their death certificates often cited “suspected COVID-19” or “atypical pneumonia” as the reason for death.

The government said a review of death certificates revealed that more than 70 percent of the country’s “excess deaths” were likely COVID cases. Since the pandemic began, the new data revealed that there were 417,002 excess deaths in Mexico, which is the difference between projected deaths based on previous years and the reported ones.

“This is scandalous,” Laurie Ann Ximenez-Fyvie, head of the Laboratory of Molecular Genetics at Mexico’s National Autonomous University.

“Mexico today is a country that has one of the highest excess mortality rates per population in the entire world,” Ximenez-Fyvie told Al Jazeera.

“This is the sum of doing everything wrong,” she said.

Since the pandemic began spreading rapidly in Mexico over a year ago, Mexican President Andres Manuel Lopez Obrador sought to downplay the gravity of the disease. Citing the need to protect the economy, he did not shut down the nation’s borders, or issue nationwide lockdowns. He encouraged people to go to work and socialise. He also refused to wear a mask, even after contracting the disease himself.

Medical experts say the country kept the rate of COVID testing low, limiting it to symptomatic cases with severe disease, which contributed to low detection rates as well as the further spread of the virus.

Experts add that the low testing rate and the inaccurate death toll prevented Mexicans from realising the full impact the disease was having on the country. It also encouraged people to flout health guidelines, such as wearing a mask and maintaining social distancing.

Testing widely and keeping an accurate death toll are important metrics to understanding the spread of the virus and crucial tools to respond to it, experts say. Testing is particularly crucial since it allows infected patients to isolate, making them less likely to infect others.

“It is very important to get a sense of the magnitude of the public issue that we have,” said Fernando Alarid Escudero, an assistant professor at the Center for Research and Teaching in Economics (CIDE) in Mexico.

“The previously reported number was already terrible, then you add on top of that 60 percent, it really shows the terrible situation that we are in,” Alarid Escudero told Al Jazeera.

He said also missing are detailed information such as ages, locations and dates on the spread of the variances and on the vaccination rates, which are critical to making accurate scientific predictions.

According to data compiled by Our World in Data, 5.4 percent of the Mexican population has been vaccinated so far.

Alarid Escudero said the low vaccination rate means Mexico could see another wave of COVID-19 infections and deaths in the coming weeks, especially given Semana Santa, or Holy Week which began on Sunday, during which Mexicans typically travel for vacations and to visit friends and relatives. 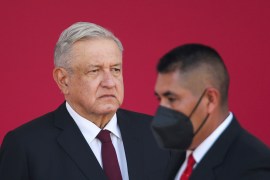 The nation confronts a stalled vaccination campaign and a president who downplays the threats of the pandemic. US to ‘loan’ COVID-19 vaccines to Canada and Mexico

The White House said it will send four million doses of the AstraZeneca vaccine to Canada and Mexico. 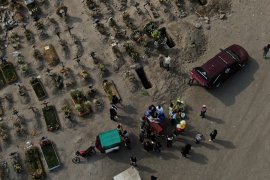 Experts believe the actual death toll is 100,000 deaths higher, but is unknown due to extremely low rate of testing.