Protest movements are on the rise worldwide amid deepening inequalities and job crises worsened by the continuing coronavirus pandemic.

In 2020, widespread COVID lockdowns sparked protests in countries across the world, with millions marching through the streets demanding jobs, democratic freedoms, social justice and an end to corruption.

Here is a look at some of the biggest protest movements around the world.

Global protests on the rise

The mass mobilisation data project, which tracks protests outside the United States, has recorded nearly 7,000 protests from 153 countries over the past 10 years.

While most protests range from hundreds to thousands of demonstrators, between 2010 and 2020, there were at least 900 protests around the world with more than 10,000 participants.

This map highlights the number of such protests in each country over the past 10 years. 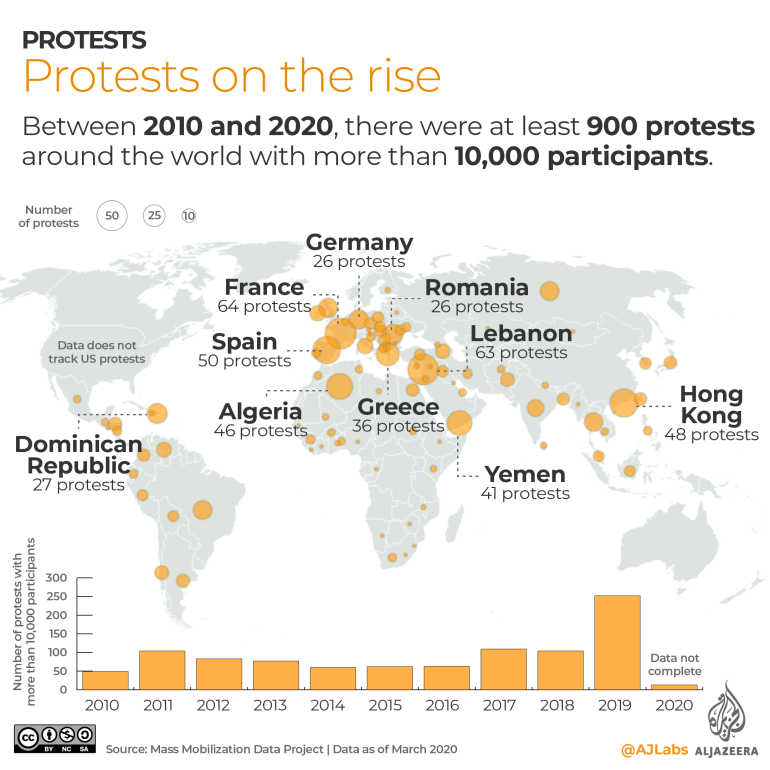 France, with its ongoing “yellow vest” movement, is among the countries with the most frequent large-scale protests. The anti-government strikes, named after motorists’ high-visibility vests worn by the strikers, began in late 2018 to protest fuel taxes and privatisation.

In Lebanon, protests that began in October 2019 continued as economic conditions deteriorated and protesters demanded an end to widespread corruption. The country’s financial meltdown has driven nearly half its six million people into poverty.

In Hong Kong, what started out as protests against an extradition bill reignited a pro-democracy movement over mainland China’s involvement in the semi-autonomous region. The protests lasted more than two years, led to thousands of arrests and plunged Hong Kong into its biggest political crisis.

Around the world, frequent smaller protests have also taken place in Kenya, Germany, the UK, Greece, Bangladesh, Nigeria and Yemen, among others.

On November 26, 2020, trade unions in India said 250 million people participated in a 24-hour general strike to demand the government repeal three laws that would deregulate the agricultural sector. This would make it the largest protest gathering in history.

For the past four months, tens of thousands of farmers have blocked highways around New Delhi, India’s capital. They say the new laws will leave them at the mercy of big corporations. Prime Minister Narendra Modi’s government says the laws, which ease rules regarding storage, marketing and the sale of produce, will modernise and energise the farming sector.

India is no stranger to farmer protests. According to ACLED, a non-governmental organisation specialising in protest movements, since August 9, 2020, there have been at least 2,800 protests involving farmers across the country. The graphic below shows where these protests have been recorded. 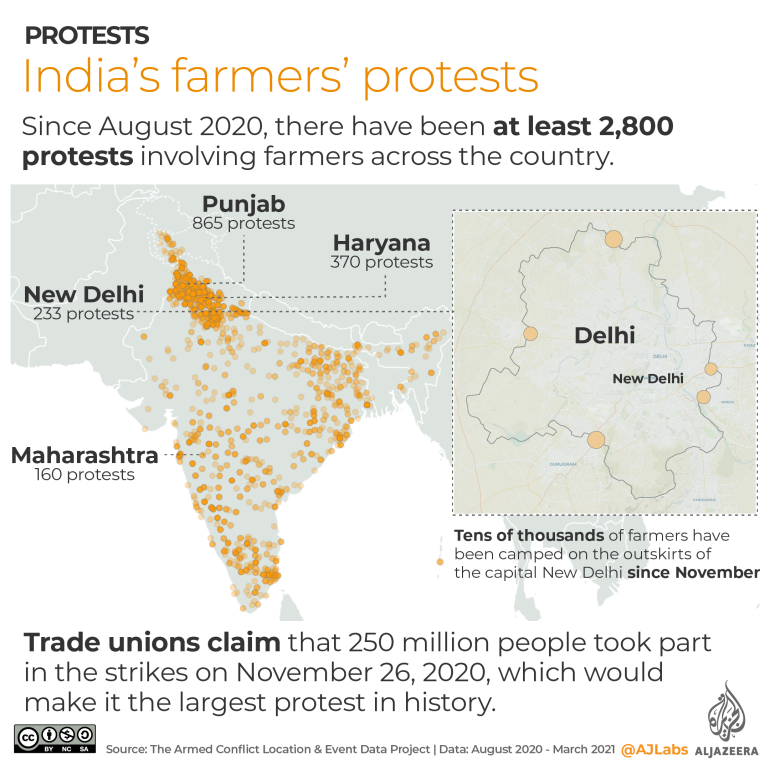 Accurately determining the size of a crowd is a point of contention. Not only is it difficult to guess beyond a few hundred people, but the crowd’s size itself can often be politicised. With slogans such as the “million-man march”, it is easy to see why true crowd sizes may be exaggerated.

Luckily, with the help of basic mapping tools, there are reasonably accurate ways for estimating the size of a crowd. One such technique is known as the Jacobs Method, named after American journalist Herbert Jacobs. The method, illustrated below, involves multiplying the density of a crowd by the protest area. 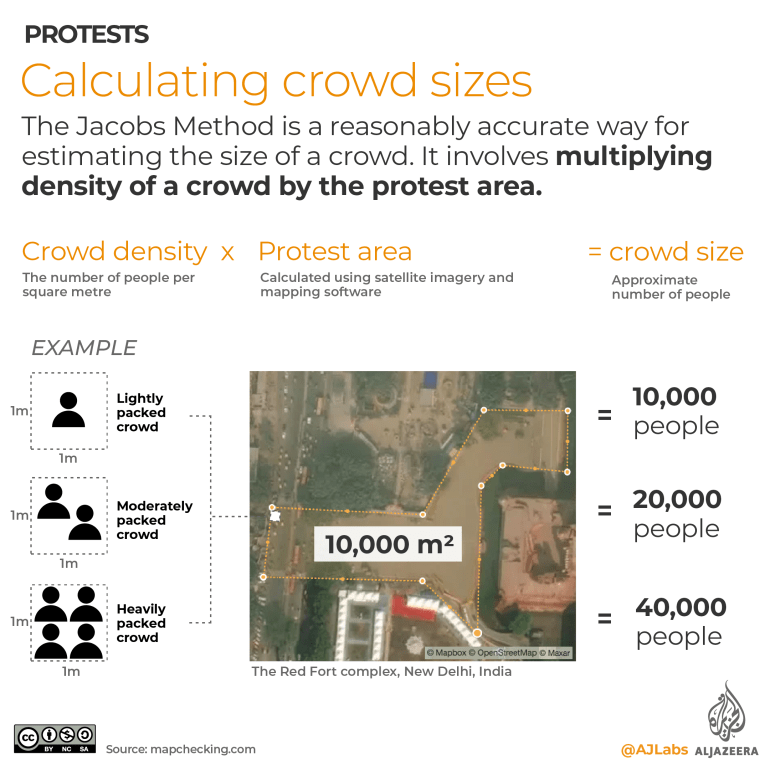 Historically, some of the largest protest movements have transcended national boundaries, mobilising millions of people behind a cause. In 2003, at least six million people from 650 cities around the world took to the streets to protest against the invasion of Iraq by a US-led coalition. In 2019, an estimated 185 countries took part in the world’s biggest climate awareness protests, demanding government action. In the virtual world, millions more have taken to online petitions and social media campaigns to demand justice and accountability.

The infographic below summarises some of the largest anti-government protests over the past five years as recorded by the Carnegie Endowment for International Peace global protest tracker. 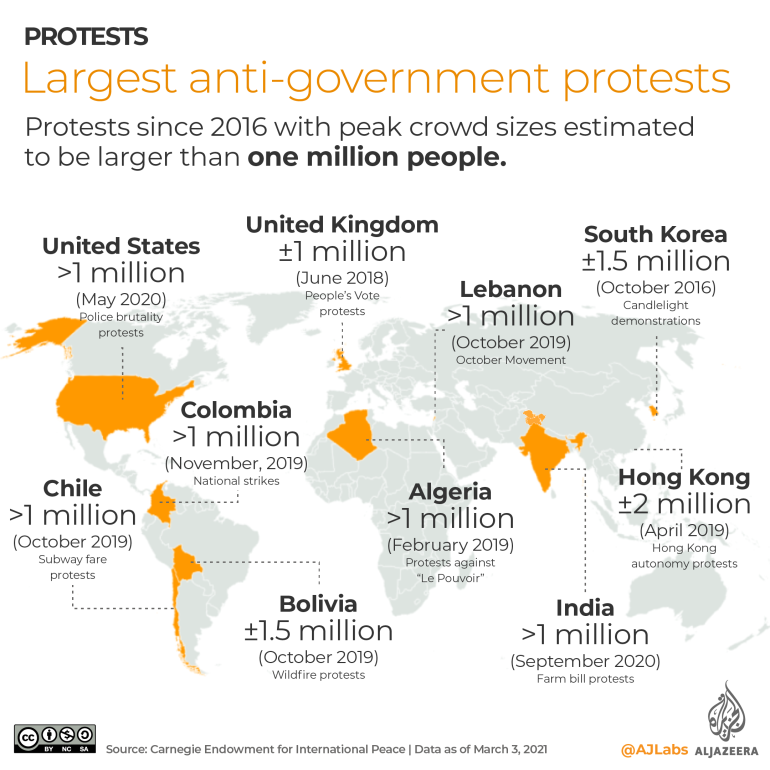 According to data compiled by ACLED, between 2010 and 2021 at least 4,800 people died in protests around the world. While more than 90 percent (PDF) of all demonstrations are peaceful, some have been met with violent crackdowns.

On Sunday, at least 114 people were reportedly killed in Myanmar when security forces opened fire on crowds protesting against the February military coup.

This is the latest in a lineup of violent responses, including the “Rabaa massacre” where more than 800 protesters were killed in Egypt on August 14, 2013. In 2011, during the Arab Spring uprisings, hundreds of protesters were killed across Tunisia, Egypt, Bahrain, Libya, Yemen and Syria, making it the second-deadliest year for protesters.

Fatality data is often highly variable depending on how it is sourced. The graphic below estimates some of the deadliest protests over the past 10 years as compiled by ACLED. 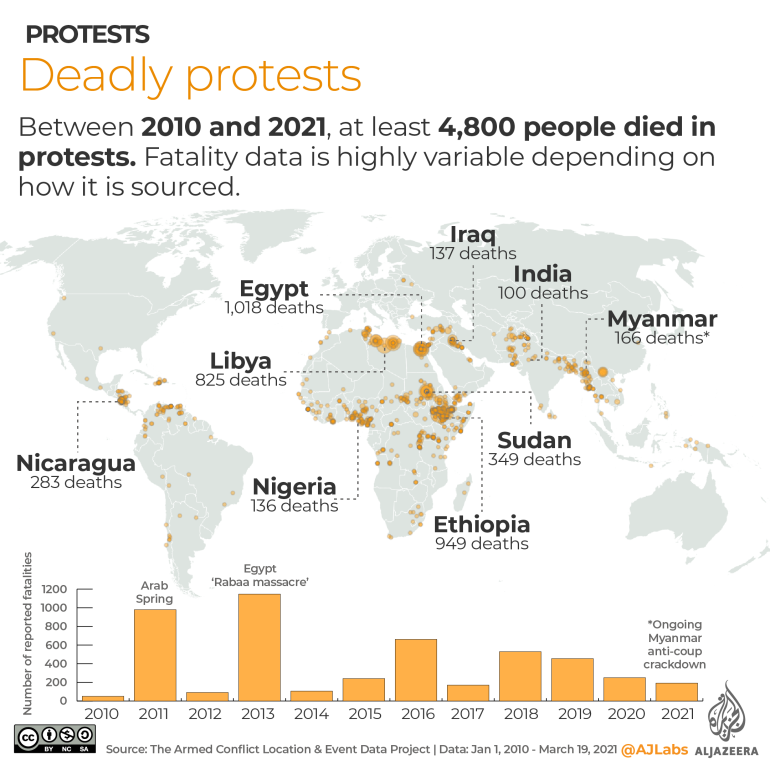