Yemen’s Houthi rebels say they have launched drone and ballistic missile attacks on Saudi Arabia, targeting oil facilities owned by the state-run Saudi Aramco company and military sites, coinciding with the sixth anniversary of the kingdom’s military intervention into the neighbouring country.

The Iran-aligned group on Friday said they launched attacks on Thursday against King Abdulaziz military base in Dammam and military sites in Najran and Asir. The group also said they targeted Aramco facilities in Ras Tanura, Rabigh, Yanbu and Jizan.

“The operation has successfully fulfilled its objectives,” Houthi military spokesman Brigadier General Yahya Saree said in a televised speech on Friday. “We affirm that we are ready to carry out a more severe and more cruel military operation in the coming period.”

We affirm that we are ready to carry out a more severe and more cruel military operation in the coming period.

Saudi Arabia’s defence ministry described the assault on Jizan as a barrage of eight bomb-carrying drones launched by the Houthi rebels.

According to al-Arabiya TV, Saudi Arabia’s air defences intercepted a ballistic missile over the southern province of Najran.

Saudi Arabia has faced an increasing number of such assaults and the tempo has not slowed since it offered a ceasefire deal to the Houthis on Monday.

A Saudi-led military coalition has been carrying out bombings in Yemen since March 26, 2015 in support of the internationally recognised government that was toppled by the Houthis. 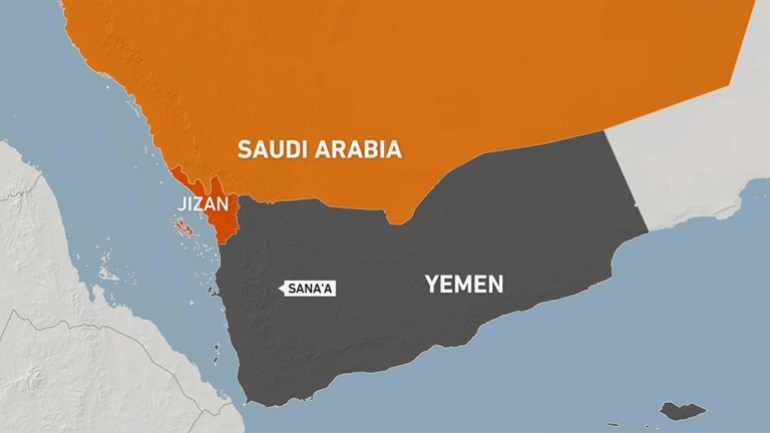 The attack in Jizan, some 970km (600 miles) southwest of the capital, Riyadh, on the Red Sea, struck a distribution facility just after 9pm (18:00 GMT) on Thursday, the Saudi energy ministry said in a statement carried by the state-run Saudi Press Agency.

“The attack resulted in a fire in one of the terminal’s tanks,” the statement said, without elaborating. “The attack left no casualties.”

Saudi Arabia did not specifically identify the area struck. However, Jizan is home to a new refinery and port facilities for Aramco. The refinery, with a capacity of 400,000 barrels a day, sent its first shipment abroad last year.

Benchmark Brent crude rose to over $63 a barrel in early trading on Friday after the attack.

The Saudi-led coalition entered Yemen’s war in March 2015 promising that the offensive – the brainchild of Crown Prince Mohammed bin Salman – would be over in short order.

Six years later, the fighting continues. The war has killed some 130,000 people, including at least 13,000 civilians slain in targeted attacks, according to the Armed Conflict Location and Event Data Project. Tens of thousands of children have died of starvation and disease.

The war has also turned into a regional conflict, with the Saudis using United States-made weaponry in internationally criticised air raids killing civilians, and Iran being linked to weapons used by the Houthis to target the kingdom.

Last month, the Biden administration ended US support of Saudi’s war in Yemen and also suspended the sale of weapons.

On Monday, Saudi Arabia offered a new ceasefire proposal to the Houthis. It made two concessions to the Houthis in the plan while not offering everything the rebels previously wanted. The first involves reopening Sanaa International Airport, a vital link for Yemen to the outside world that has not seen regular commercial flights since 2015.

The second would see taxes, customs and other fees generated by the Hodeidah port while importing oil put into a joint account of Yemen’s Central Bank. That account would be accessible to the Houthis and Yemen’s recognised government to pay civil servants and fund other programmes, officials said.

The Saudi government and the Yemeni government it backs have accused the Houthis of stealing those funds in the past.

On Wednesday, Saudi Arabia allowed four fuel ships to dock at Hodeidah port in a sign of a softening of its position. The gesture was praised by US Secretary of State Antony Blinken on Thursday. Washington has urged the Houthis to stop targeting Saudi positions and join negotiations to end the war.

The US envoy to Yemen, Timothy Lenderking, has been visiting the Middle East as part of efforts to end the devastating war that has pushed millions towards starvation and left more than 80 percent of Yemen’s population at the mercy of foreign aid.

Ibrahim Fraihat, associate professor in international conflict resolution at the Doha Institute, said the conflict’s escalation in recent weeks is a reflection of internal and regional dynamics where the Houthis and their key backer Iran are trying to enhance their negotiating position ahead of possible peace talks.

“This is important for the Houthis because the way they see it is if they escalate and gain power on the ground, this significantly improves their negotiating position,” Fraihat said.

“In addition to this, there is also the regional dimension, we are seeing a stalemate in negotiations on the nuclear deal with Iran and Iran is trying to escalate on this side because Tehran is demanding that the US lift the sanctions.”