More than half of Israel’s 9.2 million people have received both doses of the Pfizer/BioNTech vaccine against COVID-19, the health ministry has said.

Yet vaccination is far slower in areas controlled by the Palestinian Authority (PA), which has relied on donations and limited supplies from Israel. The 5.5 million Palestinians living in the occupied West Bank and blockaded Gaza Strip have received only about 120,000 vaccines so far.

With more than 4.6 million residents vaccinated, Israel continues its world-beating campaign that sent infection rates plummeting and allowed for some limited loosening of restrictions.

But it has come under international criticism for not doing more to enable Palestinian vaccination. It says Palestinians are responsible for such health measures in their semi-autonomous areas but critics, rights groups and some Democratic Party legislators in the United States have pointed out that as an occupying power, Israel bears the responsibility for inoculating the population it exerts control over.

In a statement announcing the milestone amid a sustained drop in new COVID-19 cases, Israeli Health Minister Yuli Edelstein on Thursday called on citizens “to follow [health] guidelines so that the coronavirus does not return”.

He said 50.07 percent of the overall population had received both vaccine doses, and 55.96 percent the first dose. Israel issues the fully vaccinated, and about 8.7 percent of its population who have recovered from COVID-19 with presumed immunity, so-called “Green Pass” certificates that confer access to various leisure venues.

Israel began easing a nationwide lockdown in late February. Most businesses and schools, as well as airports, have gradually resumed activity – with caps on capacity.

The country has seen an 85 percent drop in daily COVID-19 deaths, and 86 percent fewer daily coronavirus cases since the pandemic’s third peak in mid-January, according to Eran Segal, a data scientist at Israel’s Weizmann Institute of Science.

Director-general of the Israeli Health Ministry Hezi Levi told Reuters news agency he estimated that the entire population eligible for vaccination will be fully inoculated by the end of May.

Israel has had three lockdowns and 6,157 deaths from the coronavirus pandemic. Public frustration grew at the uneven enforcement of health restrictions among the ultraorthodox population.

Earlier, in March, the PA received 60,000 doses of the Pfizer-BioNTech and AstraZeneca vaccines, which were delivered via the COVAX programme of the United Nations.

Palestinian officials said health workers, people above 75 and patients with kidney disease or cancer could get the vaccine.

The UN says it plans to deliver enough doses to inoculate another million Palestinians via the COVAX programme.

Palestinians have also received about 60,000 doses of the Russian Sputnik V vaccine from the United Arab Emirates, and they are set to receive a further 100,000 Chinese vaccine doses as well.

The first delivery of 1,000 Russian Sputnik V vaccine doses to the Gaza Strip was initially blocked by Israel last month for two days, before the Israeli government relented.

The Palestinian health ministry said 1,910 people have died from the coronavirus in the West Bank and another 593 in the blockaded Gaza Strip.

Israel vaccinated more than 100,000 Palestinian workers with permits to enter Israel or Israeli settlements in the West Bank. 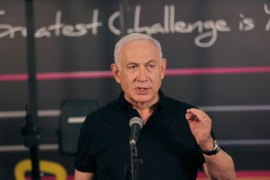 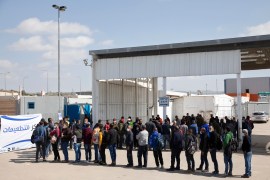 Israel starts to inoculate Palestinian workers over two months after launching vaccination blitz of its own population. 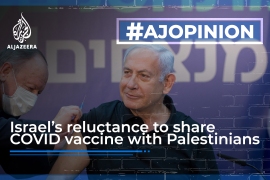 As an occupier, Israel must provide medical supplies to Palestinians and adopt measures to combat the virus there.