United States Vice President Kamala Harris has called a recent wave of unaccompanied children crossing the country’s southern border from Mexico a “huge problem”, but said it would not be solved “overnight”.

Harris made the comments during an interview on the CBS This Morning programme on Wednesday as the administration of President Joe Biden has sought to defend its immigration policy.

Biden has assured his approach to the migrant issue will be more humane than his predecessor Donald Trump’s. Critics have charged the shift in tone has encouraged more people to attempt the journey, with many Republicans seeking to portray the situation as a “crisis”.

Since Biden’s inauguration, the US has seen a spike in the number of people encountered by border officials.

There were 18,945 family members and 9,297 unaccompanied children encountered in February – an increase of 168 percent and 63 percent, respectively, from the month before, according to the Pew Research Center.

Harris spoke shortly before she and Biden are set to meet the heads of the Department of Homeland Security and the Department of Health and Human Services, both of whom are tasked with managing the migrants crossing the southern US border.

The White House has also dispatched officials to a Texas resettlement facility. The officials, along with several members of Congress, will travel to a refugee resettlement centre in Carrizo Springs on Wednesday, the White House said in a statement, adding that it would also allow limited media coverage of the visit amid pressure from journalists.

On Monday, photographs emerged of a crowded migrant detention facility housing children along the southern border.

The photos, released by Representative Henry Cuellar, a Democrat from Texas, showed children being held in crowded rooms with mattresses on the floor surrounded with clear plastic at the detention facility in Donna, Texas.

The legislator said one pod meant to hold 260 people was housing 400 boys.

Officials have also said the influx has overwhelmed facilities meant to house children who have crossed the borders.

As a result, thousands of migrant children are regularly being held by immigration authorities longer than the mandated 72-hour limit, after which they are meant to be turned over to Health and Human Services centres that are better equipped to offer care.

“Are we looking at overcrowding at the border, particularly these kids? Yes,” Harris said during the Wednesday interview. “Should these kids be in the custody of HHS, Health and Human Services, instead of the Border Patrol? Yes.”

“Should we be processing these cases faster?” she said. “Yes.”

“This, however, is not going to be solved overnight,” she said.

Harris said the current situation was in part caused by the Trump-era dismantling of a system that allowed US officials to process children’s asylum requests in their home countries.

She added that two Biden administration envoys were currently travelling to Mexico and Guatemala where the White House says they will seek “to develop an effective and humane plan of action to manage migration”.

When asked, Harris said she and Biden will visit the border “at some point”, but did not give a timeline. 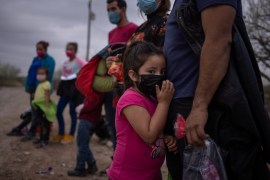 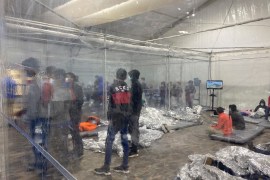 A Democratic congressman released pictures of the facility, as the Biden administration draws criticism. 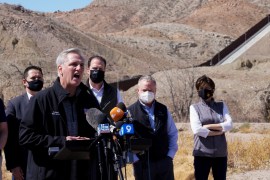