China has taken the US to task over racism, financial inequality, and the federal government’s response to the coronavirus in an annual report that seeks to counter US accusations of human rights abuses by China’s ruling Communist Party.

The 28-page report issued by China’s cabinet opens with “I can’t breathe,” a reference to George Floyd, the Black American who died last May after a police officer pressed his knee against his neck for about nine minutes.

The document released by the State Council Information Office said the United States in 2020 “saw its own epidemic situation go out of control, accompanied by political disorder, inter-ethnic conflicts, and social division”.

It also highlighted the January 6 insurrectionist attack on the Capitol as well as gun violence and health disparities.

“What happened on Capitol Hill revealed the shortcomings of US democracy,” Chang Jian, the director of a centre for human rights studies at Nankai University in Tianjin, China, said at a government news conference.

“And that is the two political parties would sometimes do everything they can to advance their own interests… They would incite division and violence among the people. So can US society continue to prosper under its current democratic system? I would put a question mark on it.”

China issues the report each year in response to US criticism of its record on issues such as abuses against minority groups in the western regions of Xinjiang and Tibet and a crackdown on opposition voices in Hong Kong.

It has used the COVID-19 pandemic, which has killed many more people in the US than in China, to highlight the Communist Party’s handling of the outbreak – and by extension, what it sees as the benefits of its system.

“To defeat the epidemic requires mutual help, solidarity, and cooperation among all countries. However, the United States, which has always considered itself an exception and superior, saw its own epidemic situation go out of control, accompanied by political disorder, inter-ethnic conflicts, and social division,” the report said.

“Vulnerable groups became the biggest victims of the government’s reckless response to the epidemic,” it said.

The Chinese report is based on open-source material, as opposed to the US document, which is largely drawn from work by diplomats, journalists and human rights activists who cannot always reveal their information because of threats of retaliation from the Communist Party.

The report comes after the European Union joined the US, UK and Canada in imposing sanctions on Chinese officials over accusations they abused ethnic minorities.

Beijing retaliated by announcing it would penalise four European legislators, a German researcher and European-based rights organisation with bans on travelling to Chinese territories or having financial interactions with Chinese institutions.

A US state department spokesperson criticised the recent closed-door trials of two Canadians in China on espionage charges in apparent retaliation for Canada’s detention of an executive of the telecoms giant Huawei, who is wanted in the US on fraud charges.

“We can’t underscore enough that we stand shoulder-to-shoulder with Canada in calling for the immediate release of both Michaels, Michael Kovrig and Michael Spavor, and continue to condemn the lack of minimum procedural protections during their two-year arbitrary detention,” deputy spokesperson Jalina Porter said on Tuesday in Washington.

China has taken an increasingly hard line against any criticism of its domestic politics, or what it sees as attempts to impede its rise as a global leader.

“The United States has mountains of human rights problems in its own country,” said Li Xiaojin, a human rights official from the State Council Information Office.

“However, it is more intensively interfering in the internal affairs of other countries under the banner of human rights. It’s like when it is sick but asks others to take medicine and injections.” 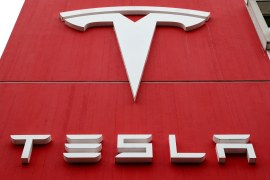 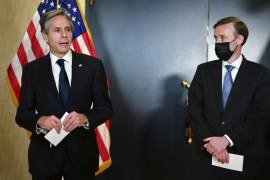 US, China wrap up ‘candid’ first talks despite tense opening

Public spat before first high-level talks could be ‘aimed at a domestic audience’, US State Department says. 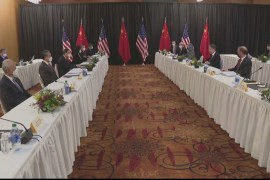 Can China and the US mend strained diplomatic ties?

Washington and Beijing’s top diplomats trade sharp rebukes at the start of talks, accusing each other of hypocrisy. 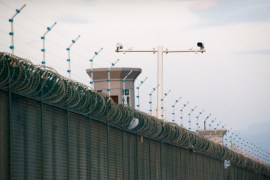 US, Canada and UK join EU in ‘coordinated action’ to pressure China on its alleged abuse of the minority Muslim Uighurs.