A 21-year-old man faces 10 counts of murder in connection with Monday’s mass shooting at a grocery store in the US city of Boulder, Colorado, local authorities said during a press conference on Tuesday as President Joe Biden called for stricter gun rules.

Biden sent his condolences to the victims of Monday’s attack by what appears to be a lone gunman and asked Congress to do more to regulate weapons.

“I urge my colleagues in the House and Senate to act. We can ban assault weapons and high-capacity magazines in this country,” he said Tuesday at the White House.

“It’s absolutely baffling, it’s 10 people going about their day living their lives, not bothering anybody. A police officer who is performing his duties, and with great courage and heroism,” Harris said at the White House on Tuesday before Biden’s address.

Eric Talley was an 11-year veteran of the Boulder police force. The father of seven had recently been looking for a less dangerous job, according to a statement released by his father.

Boulder Police Chief Maris Herold said the victims were people “who started their day with a cup of coffee and reading the morning paper. Perhaps getting their kids ready and putting on a coat to go out. Maybe they’re making last-minute spring break plans, but none of them expected that this would be their last day here on the planet.”

The suspect, identified as Ahmad Al Aliwi Alissa of Arvada, Colorado, was in stable condition after he was wounded in the leg in an exchange of gunfire with responding police officers at the King Soopers grocery outlet in Boulder, about 45km (28 miles) northwest of Denver, on Monday afternoon. Alissa was expected to be released from the hospital and jailed on Tuesday.

He has been charged with 10 counts of murder in the first degree.

Authorities have not yet offered a possible motive for the bloodshed.

Monday’s attack drew hundreds of police officers to the scene and sent terrified shoppers and employees fleeing for safety. The massacre added to the tragic list of mass killings in the US, including those in Colorado:  a 2012 mass shooting at a movie theatre in Aurora and a 1999 rampage at Columbine High School.

“My heart aches today,” Governor Jared Polis told the briefing. “Not only did we lose 10 lives, but this is real horror and terror for all of us.”

Today Colorado mourns the loss of the 10 victims of the #BoulderShooting. My heart aches for their loved ones. pic.twitter.com/1jb6QB3aeQ

Witnesses in Colorado described to the Reuters news agency a chaotic and frightening scene inside the store.

Ryan Borowski, 37, went in looking for something to satisfy a sugar craving. He had picked out a 12-pack of soda and a bag of chips when he heard shots ring out, sending him scurrying for the store’s back exit.

“It was pretty terrifying,” he said. “Fastest fire drill I’ve ever been in.”

Sarah Moonshadow, 42, was at the checkout line with her adult son Nicholas when the gunfire began.

Moonshadow said she tried to attend to a victim she saw lying on the pavement outside the store, but her son pulled her away, telling her, ‘We have to go.'” She broke down in sobs recounting their ordeal, adding, “I couldn’t help anybody.”

The carnage came six days after a gunman went on a killing spree in the Atlanta, Georgia, area, fatally shooting eight people, mostly Asian women, at three spas before he was arrested.

For the second time in a week, another community was shattered by a mass shooting, this time in Boulder, Colorado.

We must put an end to gun violence in America, and that means we can’t wait any longer to take action that’ll keep guns out of the wrong hands.

US legislators have promised to address gun violence. Senate Majority Leader Chuck Schumer said during a floor speech on Tuesday the “Senate is going to debate and address the epidemic of gun violence in this country”.

Democrats previously tried to pass regulations for background checks for gun purchases in 2013, with support from four Republicans, but four Democrats broke ranks to block the bill.

Schumer, who leads a slim Democratic majority in the Senate, along with Democrat-controlled House of Representatives and presidency, said he already “committed to bringing universal background checks legislation to the floor of the Senate”, saying this time things will be “different”. 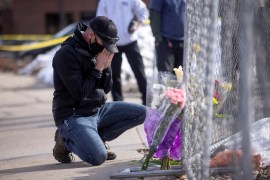 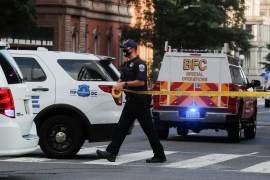 Violent crimes surge in US as COVID-19 pandemic rages

As the US grapples with the COVID-19 pandemic, which has killed more than 330,000 people, violent crime has skyrocketed. 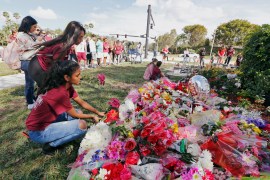