Montreal, Canada – Anti-Asian racism has reached a “crisis point” in Canada, community advocates and human rights experts said on Tuesday, as a new report detailed over 1,100 hate incidents targeting members of Asian-Canadian communities over the past year.

The government-funded report found that 1,150 racist incidents were submitted to Chinese-Canadian community and advocacy groups across the country between March 10 last year and the end of February 2021.

The incidents, the majority of which were reported via online portals by individuals who experienced or witnessed them, included verbal harassment (73 percent), physical assault or unwanted physical contact (11 percent), and being coughed on or spat on (10 percent).

Forty-four percent of the incidents were in the province of British Columbia, on Canada’s west coast, while 40 percent were in Ontario, the country’s most populous province. Asian-Canadian women were targeted in about 60 percent of all incidents.

“As Asian Canadians, our lives have been taken over by a constant sense of paralysing fear,” said Avvy Go, clinic director of the Chinese & Southeast Asian Legal Clinic in Toronto, during a news briefing to unveil the report’s findings.

“Asian-Canadian women like myself face an even greater risk of attack and regardless of whether we’re a newcomer or fifth-generation Canadian, our sense of security has been shattered,” she said.

“Slash by slash, wound by wound, each one of these incidents takes away from all Asian Canadians our sense of safety, robs us of our basic dignity, and ultimately undermines our sense of belonging in a country that we have every right to call home.”

Asian Canadians had warned in early February 2020, when Canada had recorded only three cases of the coronavirus, that xenophobia was mounting, bringing back painful memories of what happened during an outbreak of severe acute respiratory syndrome (SARS) in the early 2000s.

Tuesday’s report comes one week after a gunman opened fire at three separate spas near the United States city of Atlanta, killing eight people. Six of the victims were Asian women.

Asian community leaders have pointed to statements by right-wing leaders blaming China for the COVID-19 pandemic, such as former US President Donald Trump’s use of the terms “Chinese virus” and “kung flu“, for the recent uptick in hate incidents.

They have also said decades of anti-Asian racism, misogyny and stereotypes against Asian women played a role in the violence.

Anti-Asian hate crimes reported to police in 16 of the largest US cities increased by 145 percent in 2020, according to preliminary data released on Sunday by the Center for the Study of Hate & Extremism at California State University, San Bernardino.

Another report by the Stop AAPI Hate Reporting Center documented 3,795 hate incidents aimed at Asian Americans and Pacific Islanders between March 19, 2020 and February 28 of this year. Asian Americans have been shoved to the ground, assaulted, verbally harassed, shunned, and had their businesses vandalised in cities across the country, local media have reported.

“Americans of all types experience this perception of being ‘forever foreigners’ in a wide range of ways,” Pawan Dhingra, professor of sociology and American studies at Amherst College, said in a recent article in The Conversation. “Regardless of whether some or all – or none – of these latest assaults on Asian Americans are proved to be hate crimes or not, race plays a historic role.”

But the US is not the only country to see a surge in anti-Asian hate during the pandemic – and the Atlanta attack has put a spotlight on rising anti-Asian hate incidents around the world over the past year.

More than 220 hate crimes against East Asians in the United Kingdom were reported to police between June and September 2020, a 96 percent jump compared to the same period in 2019, according to London metropolitan police data. In a November survey, Australian National University found that 84.5 percent of Asian Australians had experienced at least one instance of discrimination between January and October 2020.

“Racism and physical attacks on Asians and people of Asian descent have spread with the COVID-19 pandemic, and government leaders need to act decisively to address the trend,” John Sifton, Asia advocacy director at Human Rights Watch, said in May.

Marie-Claude Landry, chief commissioner at the Canadian Human Rights Commission, an independent human rights watchdog, said on Tuesday that the report on anti-Asian hate incidents in Canada “is a chilling reminder that racism, hatred and intolerance have no borders”.

“Over the past year we have seen that disturbing rates in anti-Asian hate and COVID-driven racism. My hope is that today’s report and the powerful data it presents can be used as a tool to confirm and confront this growing problem in Canada. It is at a crisis point,” she said.

Meanwhile, Asian-Canadian groups are calling for concrete action from all levels of government to address the problem.

Tuesday’s report calls for more funding and other resources to allow community groups to provide anti-racism education, as well as bolster culturally-sensitive support services for victims of hate incidents.

The report also says particular focus must be paid to Asian Canadians who have been deemed essential workers during the pandemic, which puts them at increased risk of attacks – and ensuring that they have adequate workplace protections in place.

“Our sisters in Atlanta… were violently killed because of our failure to combat racism and misogyny,” said Amy Go, president of Chinese Canadian National Council for Social Justice, an advocacy group, during the briefing.

“Asian-Canadian women should not be held hostage by fear and potential threats to our lives because of our failure. We need action now.” 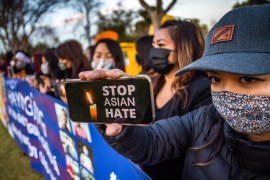 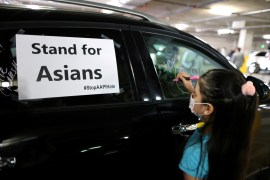 Why is violence against Asian-Americans on the rise?

Calls for hate-crime charges after women of Asian descent killed in gun attack. 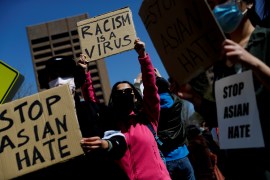 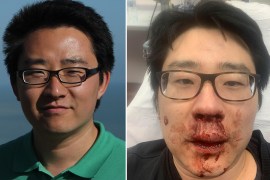 ‘I don’t feel safe’: Asians in the UK reflect on a year of hatred

A year since the UK went into its first lockdown, anti-Asian hatred is still on the rise.