Saudi Arabia has announced a plan to offer its rivals in Yemen’s long-running war a nationwide ceasefire under the auspices of the United Nations, the kingdom’s foreign minister said.

Speaking to reporters on Monday, the kingdom’s foreign minister, Prince Faisal bin Farhan Al Saud, said the ceasefire proposed to the Houthi rebels is envisioned “for the entire conflict”, including allowing for the main airport in Yemen’s rebel-held capital, Sanaa, to reopen.

It would take effect “as soon as the Houthis agree to it”, he said in Saudi Arabia’s capital, Riyadh.

“It is up to the Houthis now,” Prince Faisal added, stressing his country would continue to “protect” its borders, citizens and infrastructure and face the Houthi “aggression with the necessary response”.

The proposal would also allow for fuel and food imports through the western port of Hodeidah – Yemen’s main port of entry – and restarting political negotiations between the Saudi Arabia-backed government of President Abd Rabbu Mansour Hadi and the Houthis.

Whether such a plan will take hold remains another question. A unilaterally declared Saudi ceasefire collapsed last year.

The offer was welcomed by Hadi’s government in a statement from the foreign ministry based in the southern port of Aden.

But the Houthis said the initiative provided “nothing new”, as it still fell short of their demand for a complete lifting of the blockade on Sanaa airport and Hodeidah port.

“Saudi Arabia must declare an end to the aggression and lift the blockade completely, but putting forward ideas that have been discussed for over a year is nothing new,” said spokesman Mohammed Abdulsalam, according to the rebels’ Al-Masirah television.

“We expected that Saudi Arabia would announce an end to the blockade of ports and airports and an initiative to allow in 14 ships that are held by the coalition,” Abdulsalam said in separate comments to Reuters news agency.

“Opening the airports and seaports is a humanitarian right and should not be used as a pressure tool.”

Saudi Arabia has long accused Iran of supplying the Houthis with military aid. Iran denies the allegation, saying it only supports the rebels diplomatically and politically.

Yemen’s war broke out in late 2014 when the Houthis seized large swaths of the country, including Sanaa. Fighting escalated significantly in March 2015 when Saudi Arabia and the United Arab Emirates assembled a United States-backed military coalition in an attempt to restore Hadi’s government.

Tens of thousands of people have since been killed in the deadlocked conflict, with much of the impoverished country’s infrastructure destroyed and millions pushed to the brink of starvation. Nearly 80 percent of Yemen’s nearly 30 million people depend on foreign aid.

The announcement by Saudi Arabia comes as fighting rages around the strategic northern city of Marib and the Saudi-led coalition launching air raids as recently as Sunday targeting Sanaa. A UN mission said another suspected air raid hit a food production company in the port city of Hodeidah.

The proposal also follows the Houthis stepping up a campaign of drone and missile attacks targeting the kingdom’s oil sites, briefly shaking global energy prices amid the coronavirus pandemic.

Analysts, meanwhile, say Saudi Arabia, which has been internationally criticised for air raids killing civilians and embargoes exacerbating hunger, is keen to rehabilitate its image with the US under new President Joe Biden.

Ibrahim Fraihat, associate professor of conflict resolution at the Doha Institute, told Al Jazeera a significant difference compared with previous peace initiatives was that this time there is “a strong political will by the Biden administration that has been openly saying that this war must end”.

“There is a serious US intervention,” he added, noting that the Saudi initiative could be seen “as a way to comply with the US efforts … and throw the ball again in the court of the Houthis.”

Also on Monday, US Secretary of State Antony Blinken said in a Twitter post he had spoken to Prince Faisal “on our work together to end the conflict in Yemen, facilitate humanitarian access and aid for the Yemeni people, and defend the Kingdom from external threats. Also discussed the need for continued progress on human rights”.

There are fears, however, the Houthi push into Marib – which until recently has been relatively peaceful and stable because of well-protected oilfields nearby – threatens to ignite more fighting elsewhere in Yemen.

The UN has been attempting to renew diplomatic efforts to end the war – especially following the recent uptick in violence in Marib – but to no avail.

Prince Faisal said Saudi Arabia was “fully committed” to working with the UN to bring this conflict to an end, adding that the kingdom wanted all “guns to fall completely silent”.

“That is the only thing that can really help us get to the next step, which is a political process and resolution that can make Yemen safe and secure,” he said.

Fraihat noted, however, that six years of war have resulted in a severe mistrust between the Houthis and Saudi Arabia.

“No one trusts anyone,” he said. “So just an initiative without action or changes on the ground, I don’t think anyone would be willing to immediately … respond very positively without seeing additional assurances,” Fraihat added.

“Opening the Sanaa airport, though it’s an important step, I don’t think it’s enough in order to repair the damaged trust between the two parties. We need to see more of this, and also we need to see serious delivery of humanitarian assistance, whether to Sanaa airport or other places in order to build confidence.” 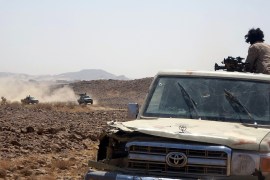 Push by rebels for oil-rich Marib threatens to displace at least 385,000 people, according to the UN migration agency. 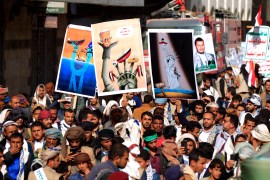 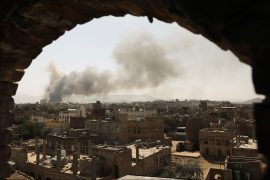