The talks on Sunday came at a crucial time for the efforts to achieve peace in Afghanistan as US President Joe Biden’s administration reviews its plan for the country before a May troop withdrawal deadline agreed to by the Trump administration with the Taliban.

In a statement, the presidential palace said Austin and Ghani discussed the peace process and concerns over rising violence. There was no mention of the US meeting a May 1 deadline to pull its forces out of Afghanistan.

Austin said on Twitter he had come to “listen and learn”, on his first trip to the country since his appointment by Biden.

“This visit has been very helpful for me, and it will inform my participation in the review we are undergoing here with [Biden],” he added.

I’m very grateful for my time with President @ashrafghani today. I came to Afghanistan to listen and learn. This visit has been very helpful for me, and it will inform my participation in the review we are undergoing here with @POTUS. pic.twitter.com/ZE39tXZqvg

According to The Washington Post, Austin earlier told reporters travelling with him in Kabul that senior US officials want to see “a responsible end to this conflict” and “a transition to something else”.

“There’s always going to be concerns about things one way or the other, but I think there is a lot of energy focused on doing what is necessary to bring about a responsible end and a negotiated settlement to the war,” Austin said.

Last week, Biden said it would be “tough” for the US to meet the May 1 deadline.

But he added that if the deadline, which is laid out in an agreement between the Trump administration and the Taliban, is extended, it would not be by a “lot longer”.

On Friday, the Taliban warned of consequences if the US failed to meet the deadline.

Suhail Shaheen, a member of the Taliban negotiation team, told reporters if US troops stayed beyond May 1, “it will be a kind of violation of the agreement. That violation would not be from our side … Their violation will have a reaction”.

Omar Samad, former Afghan diplomat and senior fellow at the Atlantic Council told Al Jazeera that the Taliban has always followed through with their threats and objectives and that the Pentagon has made preparations for any scenario.

“At the same time today we are hearing the Taliban have given the Americans a blueprint for a reduction in violence which I think is very important. It could open the way for concessions, such as maybe even extending the American stay in Afghanistan for a few months as a result of a political deal,” Samad said.

“Going forward to a conference in Turkey next month, there are a lot of issues that can be worked out politically to avoid a war scenario, which is what the Afghan people want.”

Negotiations between the Taliban and the Afghan government in Qatar’s capital, Doha, have struggled to gain momentum and violence has risen.

The US special envoy for Afghanistan, Zalmay Khalilzad, has also been travelling in the region in recent weeks with proposals including an interim Afghan government and a summit in Turkey to jumpstart the peace process.

In a sharply worded letter to Ghani earlier this month, US Secretary of State Antony Blinken said it was urgent to establish peace in Afghanistan.

He also warned it is likely the Taliban would make swift territorial gains if US and NATO troops withdrew.

Last month, NATO Secretary-General Jens Stoltenberg said the alliance “will only leave when the time is right” and when conditions have been met.

Austin has said little on the record about the ongoing impasse. After a virtual meeting of NATO defence ministers, Austin told reporters: “Our presence in Afghanistan is conditions-based, and [the] Taliban has to meet their commitments.” 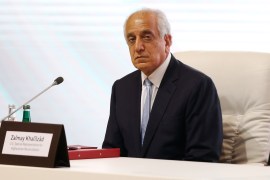 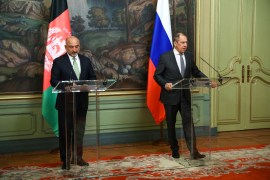 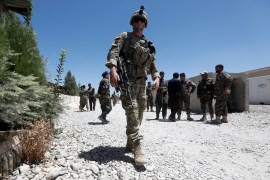