The separate calls by some members of the Association of Southeast Asian Nations (ASEAN) on Tuesday came as the bloc, in a chair’s statement after a special meeting with a representative of the military authorities, called on “all parties” in Myanmar to “refrain from instigating further violence”.

The virtual talks of the 10-member ASEAN bloc came two days after the bloodiest day of unrest since the overthrowing of Aung San Suu Kyi’s elected government. At least 21 people have been killed since the coup and activists say more than 1,100 people have been detained, including six journalists.

The military seized power on February 1, saying its complaints of fraud in a November election won by Aung San Suu Kyi’s party in a landslide were ignored. The election commission said the vote was fair.

The foreign minister of Indonesia, which has been pushing a regional diplomatic effort, urged Myanmar to “open its doors” to the ASEAN bloc to resolve the escalating tension, but said there was little it could do if it did not.

Retno Marsudi called for the release of political detainees and for the restoration of democracy, while vowing that ASEAN countries would not break their pledge of not interfering in each other’s affairs.

“Restoring democracy back on track must be pursued,” Retno said. “Indonesia underlines that the will, the interest and the voices of the people of Myanmar must be respected.”

The foreign ministers of Malaysia and the Philippines also called for the release of Aung San Suu Kyi and the halt of the violence.

In an apparent concession to the military government, Malaysian Foreign Minister Hishammuddin Hussein suggested ASEAN, which counts Myanmar as a member, could “help bridge the discrepancies found in the last elections”.

Political stability in Member States is core to achieve a peaceful #ASEAN community. We urged all parties to seek a solution via constructive reconciliation in interests of #Myanmar people. ASEAN stands ready to assist in a positive & constructive manner.https://t.co/v6X7Yiq0cB pic.twitter.com/gIkBbeG0ai

But some countries were less emphatic, and a common statement from the group said “all parties” should refrain from instigating violence and that ASEAN stood ready to help.

“We also called on all parties concerned to seek a peaceful solution, through constructive dialogue,” the statement said.

It also said the ministers “heard calls” for the release of political prisoners and for the United Nations special envoy on Myanmar to play a mediating role, without identifying who made those proposals.

For its part, the Myanmar military said its foreign minister appraised the ASEAN meeting “of voting irregularities” in last year’s election and the military government’s plans, according to a report in the state owned Global New Light of Myanmar.

The report made no mention of the purpose of the special meeting, or elaborate on what was discussed by the regional foreign ministers.

Separately, ASEAN’s effort to engage with Myanmar’s military has been criticised by supporters of democracy, with a committee of removed Myanmar legislators declaring the military government a “terrorist” group and saying the bloc’s engagement would give it legitimacy.

Sa Sa, a senior member of the committee who has been anointed as its representative to the UN, said ASEAN should have no dealings with “this illegitimate military-led regime”.

The Civil Disobedience Movement (CDM), one of the leading protest voices in Myanmar, said ASEAN should not have dialogue with the military government.

“We understand the importance of dialogue. But junta has abused ASEAN since 1997 [the year Myanmar joined],” the CDM said in a tweet.

As the ASEAN meeting took place, police in the northwestern town of Kale again opened fire to disperse crowds after anti-coup protest. Several people were wounded, according to reports citing witnesses.

Myanmar’s own representative to the UN denounced the coup last week and after the military government announced he had been fired, he staked a formal claim as the legitimate representative, according to letters seen by media organisations.

The coup halted Myanmar’s tentative steps towards democracy after nearly 50 years of military rule ended in 2011, and has drawn condemnation and sanctions from the United States and other Western countries.

Singapore Prime Minister Lee Hsien Loong, who in an interview with the BBC described the coup as a “tragic” step back for Myanmar, said sanctions would not affect the military government but hurt the people and the way forward was to free Aung San Suu Kyi and work out a solution.

“To use lethal force against civilians and unarmed demonstrators, I think it is just not acceptable. That is disastrous not just internationally, but disastrous domestically,” he said.

Earlier on Tuesday, hundreds of protesters, many wearing hard hats and clutching makeshift shields, gathered behind barricades in different parts of Myanmar’s main city of Yangon to chant slogans before police moved in, firing stun grenades.

“They were acting like they were in a war zone,” a teacher at the protest, who declined to be identified, said of the police.

State television MRTV said that crowds were being instigated through social media by illegal organisations and causing instability. It said 12 “riotous protesters” had been detained in Yangon.

After the use of force by security agents on the streets, people protested from their balconies after dark across Yangon, chanting “the revolution must succeed”.

Military government leader Senior General Min Aung Hlaing has pledged to hold new elections and hand power to the winner, but has given no time frame. 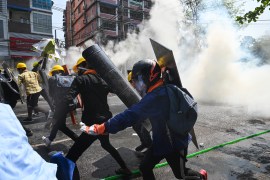 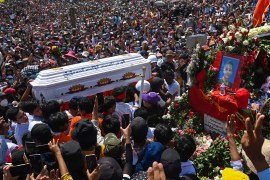 Foreign ministers will call for Aung San Suu Kyi’s release encourage talks between the civilian leader and the army. 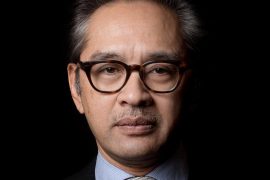