In the week that Californians mark a year of lockdown living, California Governor Gavin Newsom is launching a vigorous campaign to defend his seat in a potential recall election.

Newsom, a Democrat, has largely removed himself from commenting on the recall effort until now, focusing instead on his administration’s work to reduce the spread of coronavirus and to ensure California’s 40 million residents get their COVID-19 vaccinations.

With Wednesday’s deadline looming for recall supporters to submit voter petitions to election offices in the state’s 58 counties, Newsom launched an anti-recall campaign on Monday with the tweet: “I won’t be distracted by this partisan, Republican recall — but I will fight it. There is too much at stake.”

By Tuesday, he hit the airwaves and acknowledged the recall is inevitable, telling the TV show The View: “This one appears to have the requisite signatures.”

So, what’s behind this effort to remove Newsom, who won re-election in 2018 with 62 percent of the vote?

Recall supporters announced last week that their petition had received more than two million signatures – well beyond the roughly 1.5 million verified names that they will need to trigger a recall election. That is equivalent to 12 percent of the total votes cast in the last gubernatorial election in 2018.

This latest move to recall Newsom (the sixth since he took office) began life in February 2020 when Orrin Heatlie, a retired Yolo County Sheriff’s Office sergeant, filed a notice of intent to circulate a recall petition. It claimed that the governor has enacted laws that were detrimental to Californians, from favouring foreign nationals and overruling the will of the people on the death penalty, to creating high taxation and homelessness.

Since the petition went live last June, it has been boosted by support from critics of Newsom’s handling of the coronavirus.

COVID-19 has been brutal in California. The latest figures show the state has experienced more than 3.5 million cases and about 55,000 deaths. Latino and Native Hawaiian/Pacific Islander groups have a disproportionate number of cases relative to their population in the state. Vaccine rollout inequities have resulted in Black and Latino communities not getting the shots they need. And people 65 and above have experienced a disproportionate number of deaths.

While Newsom has overseen the setup of mass vaccination sites in Oakland and Los Angeles and says equity is his “North Star” for vaccinating the state’s diverse population, community health centres say they are not receiving enough doses for their at-risk, hard-to-reach patients. Public health experts have attributed this to a “Balkanisation” of vaccine distribution, dependent upon the county or health provider.

But in a recent interview, Newsom admitted that ensuring California’s most hard-hit residents got the COVID-19 vaccine first should have been the priority all along. He recently announced California would set aside 40 percent of all vaccines for people in its most vulnerable communities. He told KQED: “In many respects, we could have gone a little earlier with this overlay.”

A recent poll conducted by the University of California, Berkeley, Institute of Governmental Studies found fewer than one in three Californians (31 percent) thought Newsom was doing an excellent or good job in handling the pandemic overall, down from 49 percent last September.

In March 2020, Newsom enacted the first statewide stay-at-home order, limiting Californians to only essential trips for grocery shopping, medical care, walks and exercise. Non-essential businesses such as hair salons, gyms and museums were forced to shut their doors temporarily during the lockdown. At the time, Newsom argued that the measures were needed to “bend the curve” on the outbreak, and would help to ease pressure on the healthcare system and hospital beds.

The slow reopening of the state’s public schools and businesses have also caused frustration. Then there was the story of California’s unemployment benefits fraud during the pandemic. Newsom’s attendance at a Napa restaurant birthday party despite state restrictions on gatherings was another blot on the copybook. (Newsom has since admitted the latter was a mistake.)

While the strict measures won the governor praise in the face of rising coronavirus cases statewide, they have also provoked frustration among many Californians, including business owners. According to research by Yelp, about 40,000 small businesses had shut by September and half of these were permanent closures.

At his recent State of the State address, Newsom said of the stay-at-home order: “We agonised about the sacrifices it would require. We made sure that science – not politics – drove our decisions.”

Randy Economy is senior adviser for the California Patriot Coalition – the group behind the recallgavin2020 campaign. A former broadcaster who also worked on Donald Trump’s 2016 election campaign, Economy refutes claims that the recall campaign is a partisan one.

“Right now, 38 percent of those people who have signed our petition are anything other than Republicans,” Economy told Al Jazeera. “They are Democrats and ‘decline to state’ and third party registration individuals.”

Economy argued that the campaign has gained momentum because of the governor’s performance through the pandemic: “He has failed to lead in the time when we needed a leader. He put 40 million of us under house arrest for a year.”

Launching the anti-recall campaign on Monday, Newsom said he would fight the effort: “Getting Californians vaccinated, our economy safely reopened, and our kids back in school are simply too important to risk.”

The anti-recall campaign claims that its opponents are a “partisan, Republican coalition of anti-maskers, anti-vaxxers, QAnon conspiracy theorists and Trump supporters” who threaten California’s efforts to fight COVID-19.

Newsom’s political strategist, Dan Newman, argues that the recall is an attempt to install a Trump supporter as governor of a progressive state.

“It won’t distract or deter the governor from his focus on vaccinating and reopening,” said Newman. But a recall election will be “an enormously expensive circus for taxpayers”, he pointed out.

“It’s likely to cost taxpayers more than $100 million and that’s money – and energy and attention – that would be better served accelerating vaccinations and supporting schools so they can reopen safely and helping support small businesses and families who have suffered from the pandemic,” Newman said.

As of this week, California has administered more than 12 million vaccine doses and its COVID-19 case rate is down 27 percent in the last week. About two-thirds of the state’s counties are in red tier, which allows for limited indoor reopening of restaurants, theatres and museums. This return to normality could play well for Newsom in the event of a recall election later this year.

Wednesday marks the last day signatures can be gathered for the recall petition. County election officials have until April 29 to verify the signatures and if there are 1,495,709 valid signatures ultimately certified by the California secretary of state, the recall process can proceed, with an election expected by October.

The recall ballot will consist of two questions: Support for the recall and candidate choice. A majority vote is required on the first question. The candidate with the most votes on the second question would win the election, no majority required.

There have been 55 attempts in California history to recall a governor, but the only successful one was in 2003 when Democrat Gray Davis was recalled and replaced by actor Arnold Schwarzenegger, a Republican.

Several Republicans are signalling their interest in potentially taking on Newsom in a recall election, including conservative activist Mike Cernovich; John Cox, who lost to Newsom in 2018; and former San Diego mayor, Kevin Faulconer.

A recent poll by Emerson College Polling found that 58 percent of California voters think it is time for someone new and only 42 percent would re-elect Newsom, which could spell challenges ahead even if he survives a recall. 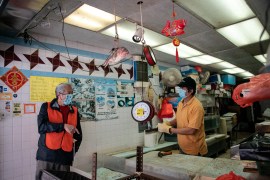 US monitoring groups have recorded thousands of cases of discrimination against Asian Americans during the pandemic. 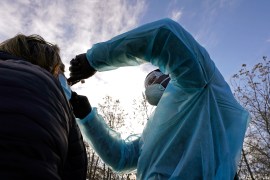 Health experts predict the US is headed for a surge in coronavirus cases that could kill about 3,000 people a day. 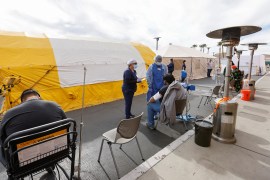