The United States Justice Department on Monday charged two suspects who allegedly worked together to spray a chemical irritant on three Capitol Police officers on January 6, one of whom later died.

Julian Elie Khater and George Pierre Tanios, who were arrested on Sunday, are facing multiple counts, including assaulting police with a deadly weapon, after investigators said they sprayed at least three officers with an unidentified, but powerful, chemical agent, possibly bear spray.

One of those officers, Brian Sicknick, was later rushed to a hospital and he died the next day.

Khater and Tanios are not charged with killing Sicknick, the Reuters news agency reported.

The Washington Post reported they “are charged with nine counts including assaulting three officers with a deadly weapon”. Khater is from Pennsylvania and Tanios is from Morgantown, West Virginia, the paper said. They are expected to appear in a federal court on Monday.

The charging documents for Khater and Tanios are not currently available in the US online court system or the Justice Department’s database of Capitol riot investigations.

The Post, which has seen the charging documents, said an FBI agent claims Tanios said “Hold on, hold on, not yet, not yet … it’s still early”, after Khater asked for the spray, drawing from the video seen by the agent.

The FBI agent alleged the conversation shows the two men were “working in concert and had a plan to use the toxic spray against law enforcement”.

The January 6 riot was an attempt by far-right supporters of former President Donald Trump to stop a joint session of Congress from certifying President Joe Biden’s electoral victory in November.

Five died in the aftermath, including Sicknick. More than 300 have been arrested in connection with the riot. 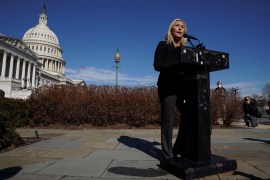 Greene calls out Republicans voting with Democrats to remove her committee appointments as anti-free speech. 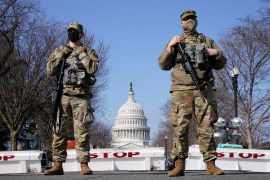 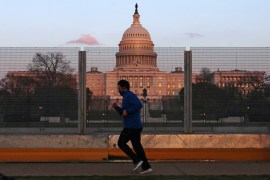 Authorities say intelligence points to a plot to storm the US Capitol on or around March 4, though things remain quiet.