Ugandan opposition leader Bobi Wine was briefly detained on Monday as he took part in a protest in the capital, Kampala, against the detention of his supporters, according to posts on his Twitter page.

The 39-year-old opposition leader last week called on Ugandans to “rise up peacefully and unarmed” against President Yoweri Museveni who won a sixth term in office following disputed elections in January.

Bobi Wine, who has disputed the results of the presidential election, managed to win 35 of the votes, while the incumbent president was declared the winner of the January 14 polls with 59 percent of the vote.

Earlier this month he presented files he claimed showed he was the real winner. Al Jazeera has not been able to verify the evidence he has presented.

Thankful to these fellow leaders who joined me in a peaceful protest in Kampala. As always, the cowardly regime arrested us all and released us without charge. The police continues to surround my home. We shall stop at nothing until Gen. Museveni stops humiliating our people! pic.twitter.com/V2MXPcmkfI

About 15 members of parliament and activists from Bobi Wine’s National Unity Platform (NUP) political party, wearing business suits and red ties, took part in the brief protest which was quickly halted by police officers and soldiers.

Bystanders cheered in support of the small group of protesters but did not join the demonstration itself.

“Bobi Wine arrested as he led MPs and other leaders in a peaceful protest against the abduction, torture and murder of his supporters,” read a tweet from Bobi Wine’s account on Monday.

In a later tweet Wine, whose real name is Robert Kyagulanyi, thanked those who took part in the Kampala protest and said all attendees had been released.

“The cowardly regime arrested us all and released us without charge. The police continues to surround my home,” he said.

Following the January 14 election, Bobi Wine was held under effective house arrest for 11 days until a court ordered his release.

Demonstrations against Bobi Wine’s arrest in November during the campaign for the poll were brutally dispersed and at least 54 people died.

The police pre-emptively declared Bobi Wine’s latest call for protests illegal and warned “organisers … to desist from participating in any unlawful activities”.

Bobi Wine was demanding the release of hundreds of his supporters he alleges have been abducted by security forces since the start of the presidential election campaign late last year.

On Thursday, Human Rights Watch (HRW) called for an end to what it called “ongoing abductions by suspected state agents and cease the unlawful detention without trial of opposition supporters”.

Museveni and his ministers have admitted that hundreds of Ugandans are in military detention but say they will either face a military tribunal or be released.

In a television address on Sunday night, Museveni referred to people who had been abducted as “children”, described their actions as criminal and accused them of attacking government supporters.

“The children who were arrested by the security forces, many of them have been talked to and they have given us a lot of information and we have helped them to go back to their families,” he said. 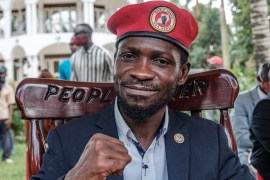 The withdrawal of security forces comes a day after a court termed his confinement since January 14 election ‘unlawful’. 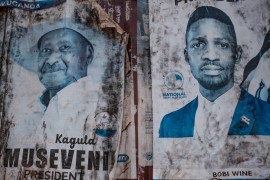 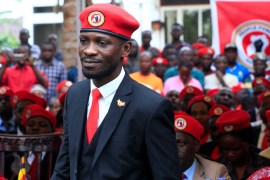 Politician tells Al Jazeera the military had been surrounding his house for the last two days.