China is joining the race with international competitors to participate in a boom of megaprojects and infrastructure developments currently under way in Egypt as President Abdel Fatah el-Sisi seeks to modernise and transform the Middle East’s most populous country.

Speaking about the rush of projects, he added: “The government has sort of been building alliances through signing certain economic deals with various countries over the last few years.”

There is no shortage of projects to go around.

A memorandum of understanding (MOU) in January between German engineering company Siemens and the Egyptian government for the construction of a $23bn high-speed electric train is one. So too is the construction of the country’s first nuclear power plant, currently under way in the Mediterranean coastal city of El Dabaa, headed by the Russian state nuclear firm, Rosatom.

Even Egypt’s archaeological treasures are caught up in the boom. The international Belgian construction firm Besix is in a joint partnership with an Egyptian company in building the Grand Egyptian Museum in Giza, which will be the largest museum in the world when it opens later this year.

Yet, the most vivid example of change in the country lies just 35 kilometres (21.7 miles) east of Cairo, where the government is rapidly constructing a megacity to house its 29 ministries, cabinet, and more than five million residents.

Although China is not the only one involved in the New Administrative Capital, it is one of the most high-profile participants.

‘New kid on the block’

“China is the new kid on the block,” Lucille Greer, a scholar of China and the Middle East at the Wilson Center in Washington, DC, told Al Jazeera about Beijing’s entry into the Middle East.

She said the relative stability of Egypt compared with other states in the region and recent efforts by the government to make the country more attractive to foreign investment have enticed China.

Chinese banks are financing roughly 85 percent of the $3bn project, which includes 20 towers, one of which, when completed at 385 metres (1,263 feet) tall, will be the highest building in Africa.

“Egypt is the hub of China’s Middle Eastern policy, particularly in politics and economy,” Degang Sun, a professor of international studies at Fudan University in Shanghai, told Al Jazeera in a statement.

“The size of Egypt’s market is surely attractive to China. Meanwhile, the relative stability and welcoming investment environment for international partners makes Egypt an essential investment destination for China,” Chuchu Zhang, deputy director of the Center for Middle Eastern Studies at Fudan University, said in an email exchange.

At the political level, Chinese and Egyptian ties go back a long way.

Under nationalist leader Gamal Abdel Nasser, Egypt was the first Middle Eastern and African country to recognise the People’s Republic of China in 1956. Former President Hosni Mubarak was one of the first foreign leaders to visit Beijing after the 1989 Tiananmen Square massacre.

Those historic relations have been nurtured under current President el-Sisi. He has made six trips to Beijing since becoming president in 2014 after a coup that overthrew the country’s first democratically elected president, Mohamed Morsi.

“The Egypt-China relationship has grown really rapidly in a short period of time,” el-Dahshan said. “It’s not so much the volume of business but the growth.”

Egypt is the largest recipient of foreign direct investment in Africa. While countries such as the United Kingdom, the United States, and the United Arab Emirates (UAE) far outstrip China as the largest investors, Beijing is catching up.

Chinese Ambassador to Egypt Liao Liqiang said in an interview with state media that Beijing’s investments in the North African country hit nearly $7bn in 2019, with 90 percent coming over a period of five years.

Both governments have been eager to play up this convergence of business interests. On a visit to Egypt last year, Chinese Foreign Minister Wang Yi stated: “China’s initiative for the Belt and Road and Egypt 2030 Vision have joint economic targets.”

That convergence is on full display at the Suez Canal. Industry leaders in Egypt say the canal zone is one of the country’s most active investment destinations today. For China, the canal is a crucial linchpin in the transport of goods to its biggest market, Europe.

“Egypt is an important country along the Belt and Road, as it has significant geographic positions. Also, as Egypt is located at the intersection of three civilisations: The Arab, Mediterranean, and African civilisation,” Zhang stated.

It is no surprise the Chinese state-owned conglomerate TEDA is the biggest investor in the Suez Canal industrial zone near the city of Ain Sokhna. The company operates an industrial park with 85 companies and more than 4,000 employees.

Jushi, a Chinese fibreglass manufacturing company, is one of the largest tenants. Its presence at the canal has made Egypt the third largest manufacturer of fibreglass in the world. Sun called it “a model of win-win development” for Cairo and Beijing.

China is eager to stress its commercial relations with Egypt are all about equal partnership.

“Egyptians feel more comfortable to cooperate with China and regard China as an equal and trustworthy brother. China treats the Egyptian counterparts equally,” Sun noted.

El-Dahshan believes the relationship is slightly different. “Beijing is in the driver’s seat.”

Egypt’s young population of more than 100 million certainly makes it a massive market for China in the Middle East. But some say Cairo could leverage its position better in this new relationship.

“If Egypt thinks of its position vis-a-vis Beijing as a regional leader it could have a significantly more powerful position with the Chinese,” el-Dahshan said. “I don’t think anyone is entirely clear on the parameters of the relationship now.”

Jushi might serve as a model for future commercial relations.

Nearly all of the fibreglass products produced at the plant are exported to Europe.

Egypt has a duty-free agreement with the EU on industrial products and is a member of the Common Market for Eastern and Southern Africa.

It also belongs to the African Continental Free Trade Area, which is currently finalising a trade agreement among members.

In order to leverage these agreements and serve as a Chinese manufacturing hub, Egypt would likely need to produce more component parts within the country and also hold China to account for technology transfer commitments.

The West vs China

That being said, the manufacturing component to Chinese-Egyptian economic relations is still small and more Chinese FDI goes into infrastructure than manufacturing.

Still, European powers have taken notice. In 2020, they imposed sanctions on Jushi and its Egyptian partners for taking advantage of what they considered to be unfair subsidies that allowed for product dumping.

Speaking about the Western perception of Chinese commercial activity in countries such as Egypt el-Dahshan stated: “A lot of established [Western] partners aren’t happy to see someone else competing with them in countries they consider to be their traditional homes.”

China’s presence continues to expand and it is branching out from the Mediterranean to the shores of Europe.

The Chinese port company Hutchinson has also won contracts to manage Alexandria and El Dekheila ports, and recently signed a new agreement to build a container-handling terminal near Alexandria.

Greer said concern over Beijing as a new competitor should be put into context. “Western companies are at an advantage. People in the Middle East speak English, not Chinese.”

El-Dahshan said given the high-profile developments, it might surprise some that China can be a difficult partner for Egypt to work with.

“Agreeing on projects and signing them takes more paperwork and time than with any other country,” he added, pointing out the agreement for the tower project in the New Capital required multiple rounds of talks after Chinese companies pulled out at various times, and concerns over its economic feasibility were raised from Beijing.

One area where there is little dispute between Beijing and Cairo is the topic of weighing into each other’s domestic politics.

“China’s approach in dealing with Egyptian affairs has its uniqueness due to its non-interference policy,” Wang told Al Jazeera.

A key issue not being discussed in the Chinese-Egyptian relationship is the persecution of Uighurs, the Turkic ethnic group and Muslim community in China’s northwest Xinjiang province.

Since 2017, there have been reports of Egypt deporting Uighur students back to China at Beijing’s request. Both the previous Donald Trump administration and Joe Biden government have called China’s persecution of the Uighurs “genocide”.

Greer puts the situation directly: “For Egypt and China human rights isn’t on the agenda. Business is the higher topic.”

While Western powers have called out Egypt over what they say are its human rights abuses, most recently in a joint statement from the UN Human Rights Council, there has been little in the way of concrete action.

Indeed, Western countries are probably even less likely to retrench in Egypt with a country such as China expanding its presence there.

Beijing continues to hold that it acts in the spirit of non-interference in countries like Egypt, but as tensions between China and the West escalate many are rethinking its claims to be a benign commercial partner.

“China spends a lot of time talking about non-interference, but at some level, we need to recognise that trade and investment counts as interference,” said Greer.

“Money will change hands, things will move and people will have changed opinions about China as a result.”

Sun said China is simply looking for mutually beneficial economic transactions in Egypt. “China seeks geo-economic interests while the West pursues geopolitical interests. Both are compatible. China is satisfied with the status quo.”

Others find it hard to square the tallest tower on the continent with the status quo. And as the Uighur issue demonstrates, political considerations due come up in the relationship.

Looking around the region el-Dahshan asked why a status quo power needs a military base in Africa, such as the one China maintains in Djibouti.

“China’s not really good at status quo,” he said. At the very least, he sees Beijing “upping its presence politically and culturally in Egypt”.

One thing that is certain, is there will be more development in Egypt for Beijing and the West to compete for.

Egypt is expanding. By 2030, its population is expected to grow by more than 30 million. And the country needs to create an estimated 700,000 to one million jobs each year for new entries into the labour force.

Megaprojects are partially seen as a way to deal with the rapidly expanding workforce.

So the building boom goes on and now China is in on it too. 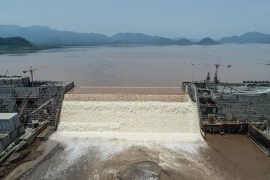 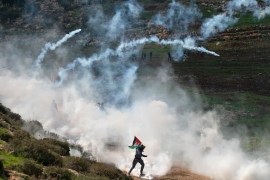 Regression, hope and change: The Middle East in 2020

While some developments have shined hope on ostensibly unsolvable conflicts, other dynamics have exacerbated issues. 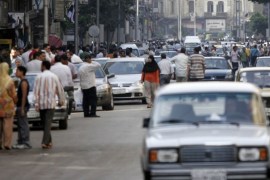 Creating new space for housing, schools and hospitals is a priority as Egypt’s population soars.