Islamabad, Pakistan – Pakistani authorities have sealed sections of the capital Islamabad, officials say, as the third wave of the coronavirus pandemic caused a spike in cases and hospital admissions across the country.

Pakistan recorded 2,253 new cases of the virus in the last 24 hours, with active cases rising by 917 to 22,038, according to government data released on Monday.

At least 29 people died from the virus on that day, the data shows, taking the overall death toll in Pakistan since the pandemic began to 13,537.

Pakistan has had a lower rate of severe disease from COVID-19, but the country has dealt with at least two prior waves of widespread infections.

With low testing rates, experts say the actual number of cases is likely far higher than the recorded data.

On Sunday, the country’s test positivity rate was 5.11 percent, with 44,061 tests conducted.

Authorities in the capital Islamabad said they would seal three neighbourhoods on Monday, due to the rapid spread of the UK variant of the coronavirus.

“More areas are expected to be locked down,” said the office of the capital’s deputy commissioner. “New UK variant strain is prevalent in Islamabad.

“[Permissions] issued to all functions, festivals, gatherings withdrawn. Any kind of indoor activity is not allowed. Outdoor functions are only allowed for two hours with less than 300 [people].”

Countrywide cases have risen by 22,018 in the last 10 days, a 68-percent increase from the preceding 10 days, according to official data.

Vaccination drive for the elderly

Last week, Pakistan began the second phase of its coronavirus vaccination campaign, with senior citizens over the age of 60 eligible to register to receive their first dose of the Sinopharm vaccine.

On Sunday, Planning Minister Asad Umar lamented that the rates of registrations were still low, saying less than 10 percent of those over 60 had registered so far.

“There is a great need for people to get registered and come get vaccinated,” Umar told private television channel Geo News.

“I appeal to people – at least those who are above 60 – to immediately get registered so we can be done vaccinating the high-risk group.”

Pakistan is currently administering vaccines from a stock of 500,000 Sinopharm vaccines donated by the Chinese government in January.

It has one of the lowest vaccination rates among countries that have kicked off large-scale campaigns, with just 0.09 vaccinations per 100 citizens, compared with 37.15 in the United Kingdom, 31.93 in the United States and 2.15 in neighbouring India.

The country is due to receive 14.6 million doses of the Oxford AstraZeneca vaccine through the global COVAX initiative in two phases.

On Sunday, the government in the country’s most populous province of Punjab imposed even tighter restrictions, ordering all but essential services to shut on the weekends and withdrawing authorisations for large gatherings and sporting events. 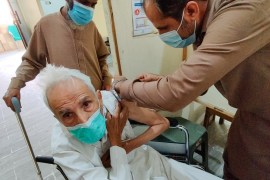 Pakistan begins vaccinating people over 60 against coronavirus, kicking off the second phase of a countrywide campaign. 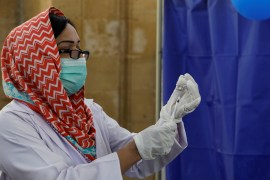 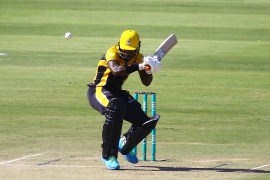