With the latest Israeli bombardments, the Gaza Strip, home to two million Palestinians, is once again the scene of destruction and human suffering.

At least eight people, including a five-year-old girl, were killed in a series of air strikes on Friday. As one of the most densely populated areas in the world, the enclave has been aptly described as “the world’s largest open-air prison”.

Gaza is a small self-governing Palestinian territory that came under Israeli occupation, along with the West Bank and East Jerusalem, after the 1967 Arab-Israeli War.

Bordered by Israel and Egypt on the Mediterranean coast, the Strip is about 365sq km, about the size of Cape Town, Detroit, or Lucknow.

Gaza is but one of the focal points in the Israeli-Palestinian conflict. Although it is part of the Israeli-occupied territories, the Gaza Strip was severed from the West Bank and East Jerusalem when Israel was created. A range of Israeli restrictions has since been created that further compartmentalises the Palestinian territories. 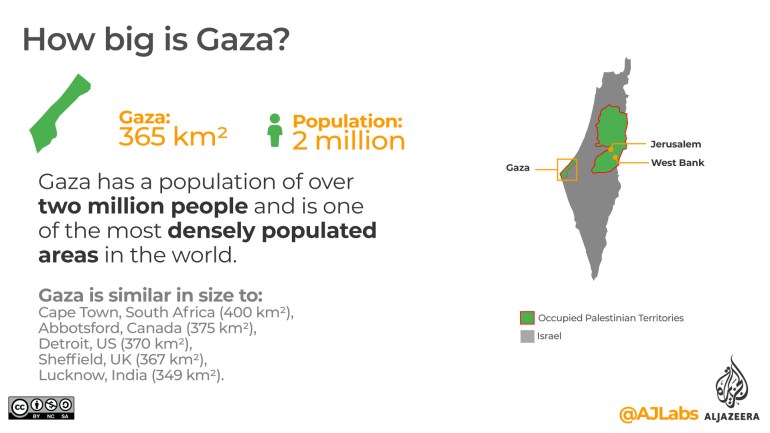 Movement of people in and out of the Gaza Strip takes place through the Beit Hanoun (known to Israelis as Erez) crossing with Israel and the Rafah crossing with Egypt. Both Israel and Egypt have kept their borders largely shut, and are responsible for further deteriorating the already-weakened economic and humanitarian situation.

Israel allows passage through the Beit Hanoun crossing only in “exceptional humanitarian cases, with an emphasis on urgent medical cases”. The number of exiting Palestinians via the crossing during the 2010-2019 decade stood at 287 people on average a day, according to the UN. Since May 2018, the Egyptian-controlled Rafah crossing has opened on an irregular basis, recording a daily average of 213 exits in 2019.

But Israel has restricted the movement of Palestinians in and out of Gaza for much longer than the past 15 years. Starting in the late 1980s with the eruption of the first Palestinian uprising, or Intifada, Israel began to impose restrictions by introducing a permit system that required Palestinians in Gaza to get difficult-to-obtain permits to work or travel through Israel or access the occupied West Bank and East Jerusalem.

Four years later, in what Israel called the “disengagement” from Gaza, some 8,000 Jewish Israelis living in illegal settlements in Gaza were pulled out of the Strip.

In 2006, the Hamas movement won general elections and seized power in a violent conflict with its rival, Fatah, after the latter refused to recognise the outcome of the vote. Since Hamas’ rise to power in 2007, Israel has severely intensified its siege.

The blockade contravenes Article 33 of the Fourth Geneva Convention, which prohibits collective punishment that prevents the realisation of a broad range of human rights.

About 56 percent of Palestinians in Gaza suffer from poverty, and youth unemployment stands at 63 percent, according to the Palestinian Central Bureau of Statistics.

More than 60 percent of Palestinians in Gaza are refugees, expelled from their homes in other parts of Palestine in 1948, in places such as Lydda (Lod) and Ramle, and now live just a few kilometres away from their original homes and towns.

The siege has led to shortages of basic items such as food and fuel. It has also stymied Gaza’s potential for long-term economic development. Chronic problems, such as access to education, healthcare and clean water, have become more pronounced.

Since the beginning of the siege, Israel has launched four protracted military assaults on Gaza: in 2008, 2012, 2014 and 2021. Each of these attacks has exacerbated Gaza’s already dire situation. Thousands of Palestinians have been killed, including many children, and tens of thousands of homes, schools and office buildings have been destroyed.

More than 95 percent of Gaza’s water has been rendered unsafe for drinking, according to the UN. 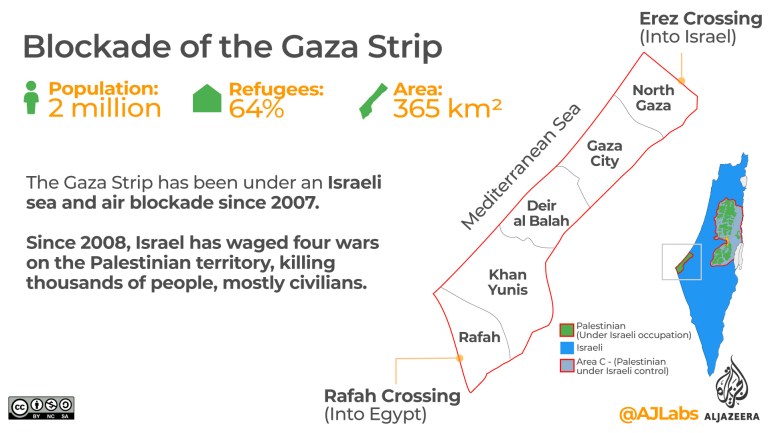 One of the most vulnerable groups affected by the siege is those with chronic illnesses. In 2016, Israel approved fewer than 50 percent of requests to exit the Gaza Strip through the Beit Hanoun crossing for medical treatment abroad.

Israel’s blockade has set the stage for a profound humanitarian catastrophe. Already in 2015 the UN warned that conditions were deteriorating at such a rapid pace that Gaza could be uninhabitable by the year 2020.

While Hamas’ 1988 founding charter called for the liberation of all of historic Palestine, including present-day Israel, it released a new political document in 2017, in which the movement stated it would accept the 1967 borders as the basis for a Palestinian state, with Jerusalem as its capital and the return of refugees to their homes.

Since laying siege on Gaza in 2007, Israel has launched four major, sustained assaults on the area between 2008 and 2021.