Four deaths were reported in Mandalay, the country’s second-biggest city, and two in Pyay, a town in south-central Myanmar. There were multiple reports on social media of the deaths, along with photos of dead and wounded people in both locations.

More than 70 people have been killed in Myanmar in widespread protests against a February 1 military coup, the Assistance Association for Political Prisoners (AAPP) advocacy group has said, a figure supported by the independent UN human rights expert for Myanmar, Tom Andrews.

“We have also seen protests spread widely … not just in large urban centres where they were immediately after the coup but in small towns all across the country,” he said.

“And in slightly unsettled ethnic areas too. We’re hearing from protesters that they’re continuing to come out very much aware of the dangers they face and they say they are absolutely committed to this, realising this is their one chance of trying to turn back the clocks on the coup.”

The deaths came as the leaders of the United States, India, Australia and Japan promised to work together to restore democracy in the Southeast Asian nation.

A police grabbed a young boy to beating with a button, a local media reported the victim is an underage man from Mandalay on March 12. Credit: Khit Thit Media #WhatsHappeningInMyanmar pic.twitter.com/aFiymHNBIF

Saturday’s protests erupted after posters spread on social media urging people to mark the death anniversary of Phone Maw, who was shot and killed by security forces in 1988 inside what was then known as the Rangoon Institute of Technology campus.

His shooting and that of another student who died a few weeks later sparked widespread protests against the military government known as the 8-8-88 campaign, because they peaked in August that year.

An estimated 3,000 people were killed when the army crushed the uprising, at the time the biggest challenge to military rule dating back to 1962.

Aung San Suu Kyi emerged as a democracy icon during the movement and was kept under house arrest for nearly two decades.

She was released in 2008 as the military began democratic reforms and her National League for Democracy won elections in 2015 and again in November last year.

On February 1 this year, the generals overthrew her government and detained Aung San Suu Kyi and many of her cabinet colleagues, claiming fraud in the November elections.

The coup in Myanmar, where the military has close ties to China, is a major early test for new US President Joe Biden.

His administration flagged a virtual meeting with the Indian, Japanese and Australian leaders on Friday, the first official summit of a group known as the Quad, as part of a push to demonstrate a renewed US commitment to regional security.

“As long-standing supporters of Myanmar and its people, we emphasise the urgent need to restore democracy and the priority of strengthening democratic resilience,” the four leaders said in a statement released by the White House.

On Friday, UN human rights investigator Thomas Andrews dismissed as “absurd” comments by a senior Myanmar official that authorities were exercising “utmost restraint”. Addressing the UN Human Rights Council in Geneva, he called for a united approach to “strip away the junta’s sense of impunity”.

Britain warned its citizens in Myanmar to leave on Friday, saying “political tension and unrest are widespread since the military takeover and levels of violence are rising”.

South Korea said it would suspend defence exchanges and reconsider development aid to Myanmar because of the violence.

The Kremlin said Russia, which has close ties to Myanmar’s military, was concerned over the mounting violence and was “analysing” whether to suspend military-technical cooperation.

Poland’s foreign ministry said a Polish journalist was arrested this week in Myanmar, the second foreign reporter to be detained. A Japanese journalist was briefly held while covering a protest.

In the Thar Kay Ta township, a neighbour of the men who were beaten – two brothers and a cousin, recorded video from his window that showed the police bringing out the men from their house and beating them with sticks.

The neighbour also heard noises from inside their house that indicated they were also beaten inside before being brought out on the street. In the recorded video, audio of shots being fired from afar can also be heard. 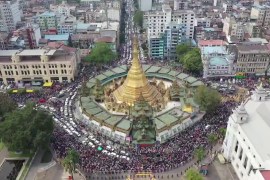 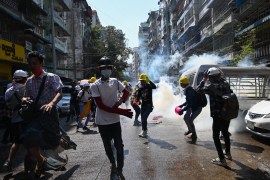