Scores of French-owned businesses across the Senegalese capital, Dakar, are still coming to terms with the devastation of smashed windows, broken liquor bottles and burned-out premises after days of nationwide anti-government protests in the West African country.

The latest protests were sparked after the arrest of an outspoken opposition leader who had been accused of rape. Ousmane Sonko, who is popular with the country’s youth, has since been released on bail but the rape charges remain.

The French presence is an everyday reality for the Senegalese people, with French troops visibly garrisoned in the capital, which is also home to France’s largest embassy in sub-Saharan Africa. The country still uses the colonial-era CFA franc currency and retains French as an official language.

If you sabotage things in Senegal you have a high probability of sabotaging French property and business. We are a Franco-African country.

Ndongo Sylla, an economist at the Rosa Luxembourg Foundation

Some critics say this arrangement, known as “Franceafrique”, is at the root of anti-French discontent because it benefits France at the expense of Senegal, where nearly 40 per cent of the population lives in poverty.

Other observers point instead to the political rise of opposition figure 46-year-old Sonko, whose arrest en route to court on March 3 triggered the protests. Critics allege that his fiery rhetoric may have whipped up his young supporters into a frenzy of anti-French rage.

France is the leading investor in Senegal and its number one trading partner.

‘We are a Franco-African country’

Ndongo Sylla, an economist at the Dakar branch of Rosa Luxemburg Foundation, explained that the sheer number of key French businesses across the capital made them an easy target for looters.

“If you sabotage things in Senegal you have a high probability of sabotaging French property and business,” he said. “We are a Franco-African country.”

Sylla said that French businesses were perceived as much as virtual monopolies edging out the local competition as powerful symbols of the country’s stark inequalities.

The Auchan supermarket chain, accused of using its foothold in the food distribution sector to undercut locals, is viewed by many as affordable for the middle classes, said Sylla, who added that impoverished looters appeared perplexed at the tubs of yoghurt that fell into their hands.

Meanwhile, toll roads, managed by French engineering firm Eiffage, he said, have “created an economic divide between those who could afford them and others who have to endure long hours in traffic jams”.

“People have destroyed them and are now circulating frequently,” he added.

Senegal’s uneasy relationship with France stretches deep into the colonial era, a major flashpoint being the massacre in the Dakar suburb of Thiaroye in 1944 of hundreds of West African soldiers who fought to liberate France in World War II.

Meanwhile, successive Senegalese presidents have enjoyed impeccably close ties with Paris, most notably the poet-president, Leopold Senghor, who was the first African to be elected to the French academy, and who lived out the last decades of his life in the northern French region of Normandy.

Colonial resentments and suspicion of elite collusion with France have become heightened in recent years, as a younger generation enters the political fray faced with the stark inequality in the country.

French-owned businesses were targeted because of the rhetoric that Ousmane Sonko has been using.

Lamine Niang, a researcher at Dakar’s School for International Training

“The tragedy of Africa is that the African has not fully entered into history,” Sarkozy said. “They have never really launched themselves into the future.”

The speech caused an outrage in Senegal, with a leading newspaper Sud Quotidien calling it “an insult”. Writers, intellectuals and politicians from across Africa joined in the condemnation of the address, which they said was based on long-discredited stereotypes.

Meanwhile, the faith Senegalese youth had placed in Macky Sall in the 2012 election that brought him to power, faded fast, Gueye said, as he failed to stem rocketing youth unemployment and a crumbling education system.

Additionally, she says: “People criticised Sall for supporting France during the [2015] Charlie Hebdo massacre when he went to France to offer his condolences but did not say a word when young people in Senegal died trying to board boats toward Europe.”

2018 saw the emergence of “France Degage” (France Go), a major grassroots movement focused on disengaging from the CFA franc, used by 14 mainly former French colonies in Sub-Saharan Africa, and regarded as the most poignant symbol of French economic neocolonialism.

“The debates around the CFA franc have been an important part of the fight to develop a consciousness to decolonise the relationship with France,” said Sylla, coauthor of Africa’s Last Colonial Currency.

The following year, the CFA franc debate, hitherto a taboo subject in Senegalese political discourse, entered the mainstream, as Sonko, a tax inspector-turned whistle-blower ran for president in 2019.

Sonko took 15 percent of the vote, electrifying young voters with a slick social media campaign as well as fiery speeches denouncing the CFA and Senegal elites’ cosy relationship with France.

“Our politicians are criminals,” Sonko said in a video in 2018. “Those who have ruled Senegal from the start deserve to be shot!”

Lamine Niang, a researcher at Dakar’s School for International Training, thinks that such bombast from Sonko has been responsible for an uptick in anti-French sentiment.

“French-owned businesses were targeted because of the rhetoric that Ousmane Sonko has been using,” he said. “He has been denouncing the French neocolonial attitude towards Senegal.”

Niang said that Sonko had characterised Macky Sall as a “puppet”, leading his young supporters to “believe that Macky Sall serves French interests, not Senegalese ones”.

For his part, Sonko struck a more conciliatory tone when he spoke to Al Jazeera on Wednesday, denying he had incited supporters. “Our relationship with France like any other countries need to be more balanced, it has to be a win-win relationship – not a one-way relationship,” he said.

Asked about the strength of feeling some in Senegal have towards France, Ndongo Sylla from the Rosa Luxemburg Foundation said: “I would not call it “anti-French” sentiment, it’s just African desire for emancipation, for liberation from neocolonialism.” 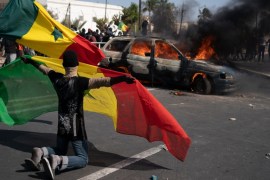 Is unrest in Senegal at risk of escalating?

Senegal has seen days of violence sparked by the arrest of popular opposition leader Ousmane Sonko. 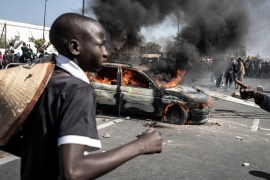 Protesters waved the Senegalese flag and torched a car during the rally after opposition leader was charged with rape.

A collective of Senegalese artists and academics calls for President Macky Sall to be held accountable for his crimes. 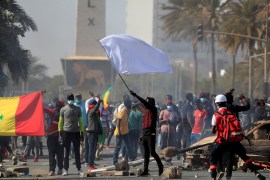 Senegal President Sall calls for day of mourning after unrest

The declaration had led to restrictions, including a curfew which added to frustrations highlighted in recent protest.