The $27m settlement made on Friday by the city of Minneapolis for the police killing of George Floyd is the largest won by the family of unarmed Black people killed by police since 2015.

Here is a list of the financial settlements in such cases to date:

A 46-year-old man who was reported for allegedly using a fake $20 bill, Floyd died on May 25, 2020, while handcuffed after a Minneapolis, Minnesota police officer knelt on his neck for nearly nine minutes.

Settlement: A wrongful death suit filed against Minneapolis resulted in a $27m offer of payment by the Minneapolis City Council on Friday. The family is seeking additional reforms to the police department.

A 26-year-old emergency room technician, Taylor was killed on March 13, 2020, by Louisville, Kentucky, police who burst into her home with a battering ram in a raid on the wrong house. Taylor’s boyfriend fired his gun at the intruders who returned fire, killing Taylor.

Scott, who was unarmed, was shot in the back while fleeing on foot from a traffic stop in North Charleston, South Carolina, in 2015.

Settlement: His family reached a $6.5m settlement with the city of North Charleston.

A Black man, Gray died from injuries he sustained while in handcuffs and leg irons after being thrown into the back of a Baltimore police van in 2015.

Settlement: His family received $6.4m from the city of Baltimore.

A motorist, Castile was shot and killed during a 2016 traffic stop in a suburb of St Paul, Minnesota, after telling police he had a gun in the vehicle. His girlfriend, sitting in the front seat of the car, live-streamed the aftermath of the shooting.

Settlement: Castile’s family was awarded $3m. His girlfriend received $800,000 in a separate settlement.

Clark was killed by Sacramento, California, police in 2018 after they chased him into his grandmother’s back yard. He was unarmed. Hundreds protested against his killing. 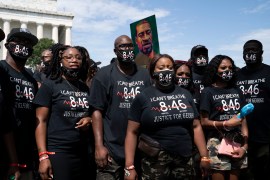 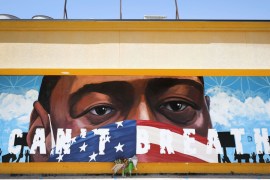 Lawyers seek an amount to be determined by a jury, hope it will be so costly as to stop future killings by police.