Secretary of State Antony Blinken will meet top Chinese officials on March 18 during a stop in Alaska, the State Department said on Wednesday, marking the first high-level in-person contact between the US and China under the Biden administration.

Blinken called the meeting “an important opportunity to lay out in frank terms many concerns the US has with Beijing’s actions”, he told a hearing of the House of Representatives Foreign affairs committee.

He also said discussions will also explore whether there are avenues to cooperate with China.

“It was important to us that this administration’s first meeting with Chinese officials to be held on American soil and occur after we have met and consulted closely with partners and allies and both Asia and Europe,” White House Press Secretary Jen Psaki told reporters on Wednesday.

She acknowledged the meeting could address “deep disagreements” between the two countries.

The meeting will come after a leaders’ meeting of the Quad group of countries, which includes the US, India, Japan and Australia, on Friday.

WH's Psaki forecasts a frank exchange when top U.S. officials meet Chinese counterparts in Anchorage, Alaska, next week. Says it was important that the first such meeting be on American soil.

US President Joe Biden and his Chinese counterpart, Xi Jinping, held their first phone call as leaders last month and appeared at odds on most issues, even as Xi warned that confrontation would be a “disaster” for both nations.

Blinken told Yang in a phone call earlier in February that the US would stand up for human rights and democratic values in Xinjiang, Tibet and Hong Kong.

The United States has criticised Beijing for its treatment of Xinjiang’s mostly Muslim Uighurs, after it emerged that hundreds of thousands had been held in a network of internment camps that China has called vocational skills training centres.

The US said on February 4 it was “deeply disturbed” by reports Uighur women were being raped in the camps and has called on allies to speak up about the alleged abuses. A report by a US think tank this week said China’s actions in Xinjiang breached every article of the UN’s convention against genocide.

China has denied the allegations.

Blinken on Wednesday called on China to allow access to the far western region.

“I think it would be very important, if China claims that there is nothing going on, that it gives access to the international community,” he said.

Blinken, who has said Beijing poses the greatest challenge to US foreign policy, has also pressed China to condemn the military coup in Myanmar and reaffirmed that Washington will work with allies to hold China accountable for efforts to threaten the stability of Indo-Pacific, including across the Taiwan Strait. 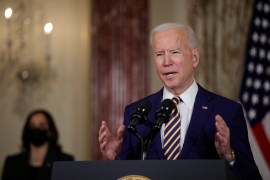 In his first foreign policy speech as president, Biden says he will rebuild relations with allies and pursue diplomacy. 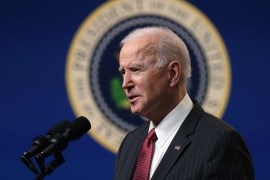 US president wants to revive diplomacy and damaged alliances, but will domestic concerns overwhelm his administration? 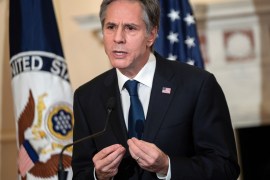